On weekends, when Jerrick McLendon can get his bass boat out on one of the area’s lakes, he knows he’s doing something good for himself. Often accompanied by his wife Chastity, a program coordinator with Duke Anesthesiology, McLendon searches for his favorite fish, crappie.

Often just a few inches in length and with a mild flavor that makes them a favorite pan fish, crappie are challenging to catch due to the wide, and often unpredictable, variety of underwater environments they frequent. So McLendon’s days on as Jordan Lake, Falls Lake and Harris Reservoir are spent trying to outsmart the fish and savoring the quiet of nature.

“It’s totally rejuvenating and very peaceful,” said McLendon, a financial analyst for Facilities Management who has worked at Duke since 2018. “It’s a stress reliever. When I’m out there, I listen to the bird calls, I’ll watch for eagles, blue herons or other birds. I’m just taking it all in and just enjoying life, enjoying nature. I’m not stressing about anything, other than what the crappie are doing.”

While walking or running have long been known to boost physical health, spending time in nature pays dividends for mental well-being. A study published in the International Journal of Environmental Health Research shows that as little as 20 minutes outside can improve life satisfaction. 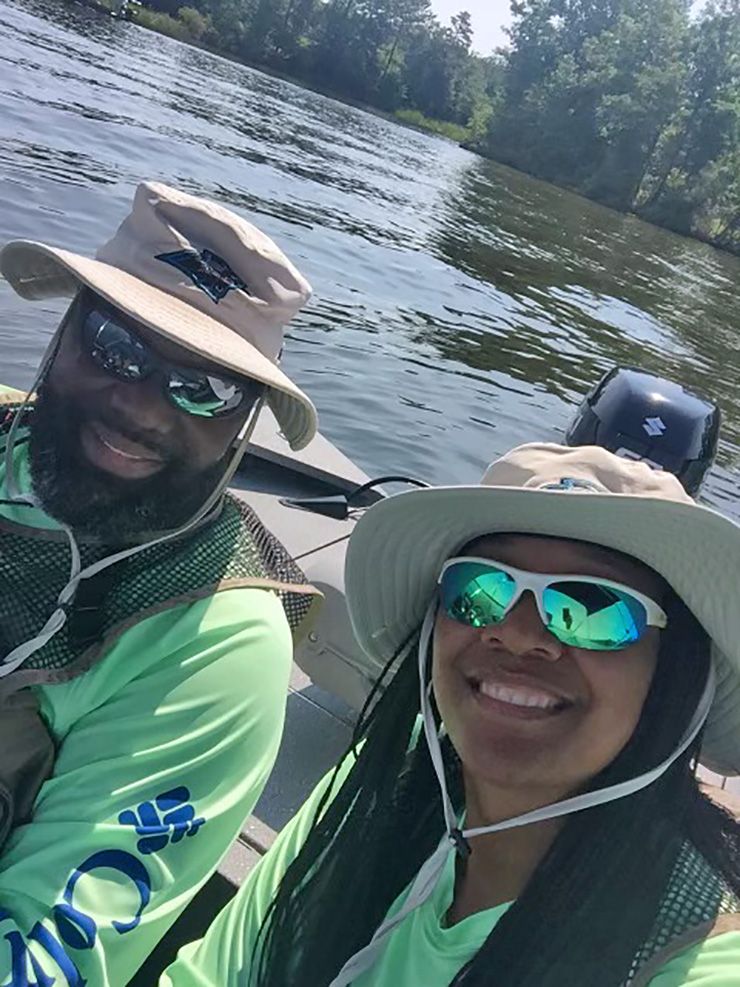 “It’s unbelievable what being outside can do for your mood,” said Duke Executive Director of Recreation & Physical Education Felicia Tittle, the co-convener for the Physical Activity & Movement section of the Healthy Duke employee wellness initiative. “For me, being in nature really does boost my life satisfaction. I feel like I have a totally different mentality.”

And for McLendon, the joy he derives from fishing goes beyond simply the time on the water.

“I can make whatever color combination I want,” said McLendon, who often consults with Chastity for good color schemes. “I can put together some combinations that a fish may not have seen. It’s just as fun as the actual fishing, and it’s very gratifying to catch a fish with something you made. It’s become its own hobby for me.”

Meet a few colleagues who have found outdoor activities to be a central piece of well-being. 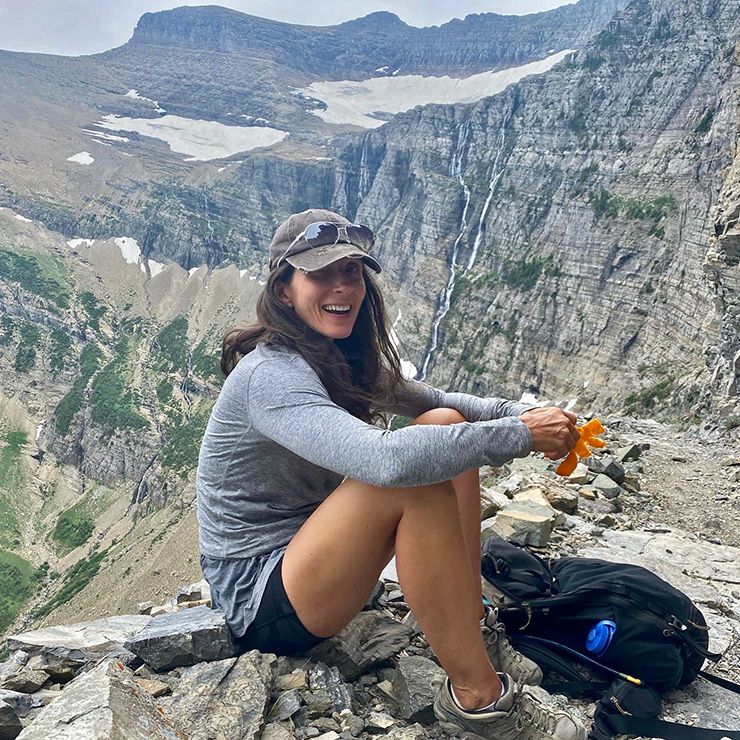 Ada Gregory, associate director of the Kenan Institute for Ethics, has always enjoyed time outdoors. As a Duke student, she competed on the Blue Devils’ rowing team. And she still rows with a master-level team from Chapel Hill.

She also saw her love of camping and hiking blossom during trips in her 20s in Australia and New Zealand. As she got older and became a mother, Gregory, now 51, had to adjust her camping and hiking habit to fit her life. Longer multi-day hiking trips were replaced by shorter excursions, often with her family, to nearby spots such as Grandfather Mountain or the William B. Umstead State Park.

When the COVID-19 pandemic struck, Gregory, like many others, felt restless and saw outdoor adventures as a safe and satisfying outlet.

“I felt like the only place I could go was outside,” Gregory said, who took hiking trips to places such as Grand Teton National Park and Yellowstone National Park.

Whether she’s enjoying quiet time with her thoughts on solo hikes, or savoring uninterrupted time to bond with family and friends on group hikes, for Gregory, the opportunity to move in the outdoors is something that’s always been part of her wellness routine.

“The feeling you get from being outside and exerting yourself, there’s nothing quite like it,” Gregory said. “It helps you sleep well, it lifts your mood. And you can spend time with people without being in front of screens, because half the time your cell phone’s not going to work.”

Family on the Water 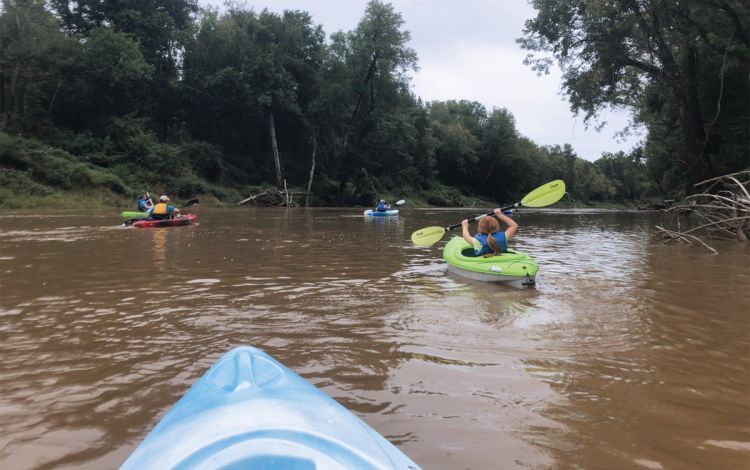 For Dustin Austin, a health center administrator at Duke Primary Care Riverview, most of the recent fun memories his family has made feature their five colorful kayaks.

“When we’re at home, the kids go off into their own rooms,” Austin said. “When we play sports, like baseball and softball, the kids are all on different teams, but kayaking is one thing we can all do together.”

Austin had his first taste of serious kayaking when he was 19 and he and a friend paddled the length of the Cape Fear River – from Jordan Lake to Wilmington. As years went by, and he became a father of three, he didn’t kayak as much.

But around three years ago, Austin pulled his old kayak – a nine-foot Perception – out of storage and began picking up used ones on Craigs List and Facebook Marketplace to build a fleet for his family.

Now, when the weather is warm, the Austins load their kayaks into the back of a truck and make the short trip from their home outside of Siler City to Jordan Lake, where they love spending days on the water, paddling and swimming.

“It’s relatively inexpensive, aside from the initial cost of the kayak, but after that, the water is free,” Austin said. “We make memories each time we go do it. It’s nice to detach and not think about anything else.” 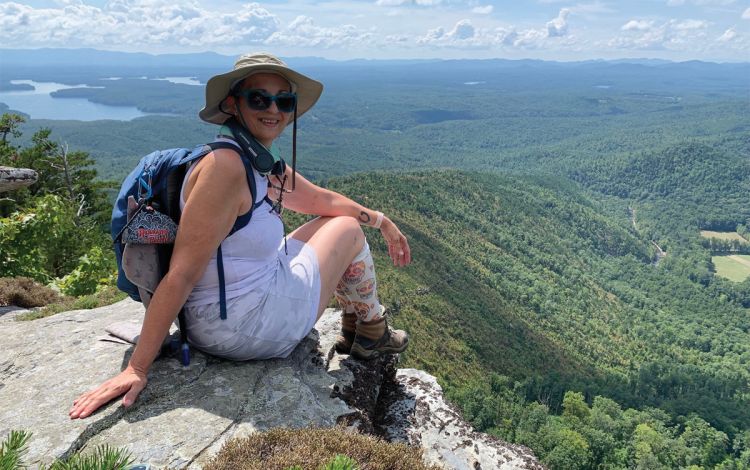 With her role as a research practice manager for the Duke Cancer Institute done mostly from home, Jamie Roberts has to work hard to gain distance from her work when she is off.

That’s where camping and hiking have grown into a much-needed escape.

“It’s become really important to me,” said Roberts, who has worked at Duke since 2015. “I call it curing my nature deficiency disorder. It’s become less about the physical benefits and more about the mental health benefits.”

Growing up in southern California, Roberts often spent time hiking, camping and skiing. And when she became a mother of two now-grown children, her family enjoyed kayaking and backpacking together. However, in recent years, she’s found special pleasure in camping, whether it be in her hammock tent or her 20-foot tow-behind camper.

“I think people really appreciate the chance to unplug from technology and get out of their bubble,” Beezley said.

The separation from work and life responsibilities speak to Roberts, who recently went on a three-week long hiking trip through Portugal and Spain and is a regular camper at Fall Lake State Recreation Area and several spots in the Great Smoky Mountains National Park.

“I can disconnect completely from thoughts about work and what I should be doing, or what needs to be done,” Roberts said, “and focus on being present where I am, rooted in the pleasures of the moment, whether around a campfire or at the top of a mountain I’ve just climbed.”