In the spring of 2007, a knee injury prevented Kara Bonneau from playing soccer and tennis, her main forms of physical activity, so she needed a new routine.

Bonneau couldn’t move side-to-side, but doctors gave her the OK to run. A friend invited Bonneau to join her in running the Anna’s Angel 10-Miler in Research Triangle Park. It would be Bonneau’s first race since running track in high school. 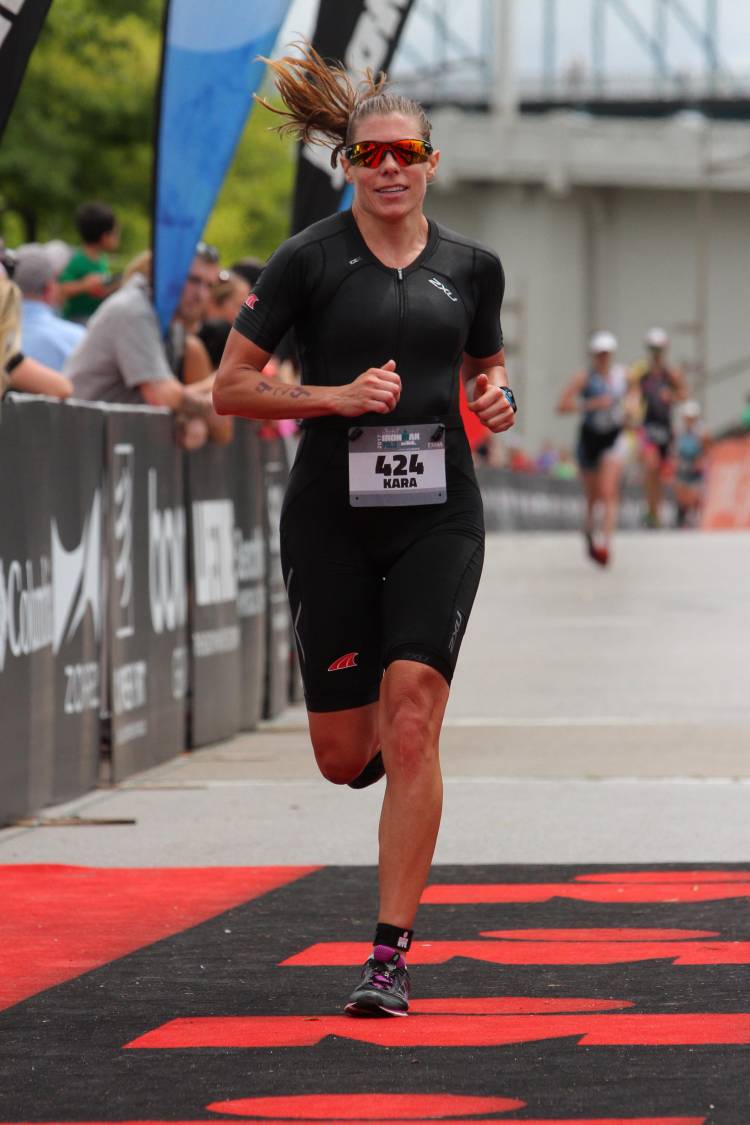 “It opened a world up to me,” said Bonneau, director of the North Carolina Education Data Center at the Duke Center for Child and Family Policy.

She started running three to four times a week, then she ran a half marathon and then a full marathon, making friends in running groups. Bonneau now competes in triathlon and Ironman races. She’s training for “Ironman Western Australia” on Dec. 6 when she’ll swim 2.4 miles, bike 112 miles and run 26.2 miles.

“It felt so great every time I got a little faster or ran a little farther,” Bonneau said. “I gained confidence in myself.”

In addition to lifting your mood, a small amount of running each week can have positive effects on your health. According to research published in the British Journal of Sports Medicine in 2019, running for less than 50 minutes over the course of a week can lower the risk of early death from all causes by 27 percent.

With the Duke Run/Walk Club starting March 9, get moving with these pointers from Duke colleagues. 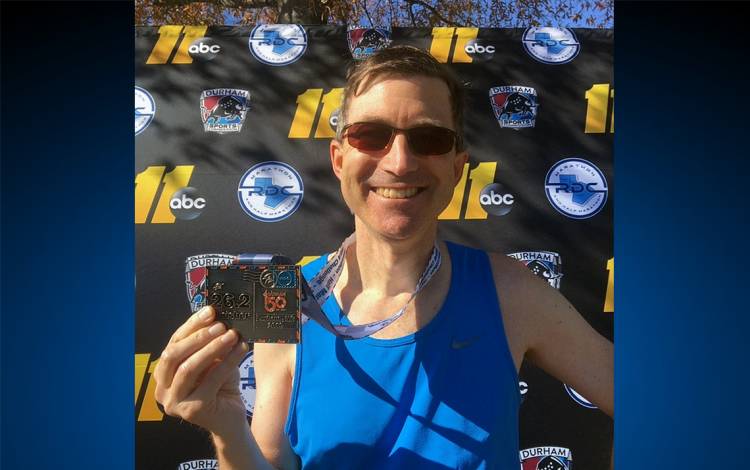 Hunter Spotts has completed marathons in Raleigh, New York City, Baltimore and is a three-time finisher of the Boston Marathon.

Spotts said he would not have achieved his goals if he started running with the mindset of completing 26.2 miles, the distance of a marathon, right away. He began running with two to three-mile sessions twice a week as a student at Furman University.

“You have to start slow,” said Spotts, assistant professor in the Department of Family Medicine and Community Health. “You’re going to put yourself at risk of injury or quitting if you try to run too many miles too soon.

He recommends starting with one to two-mile runs two to three times per week. Increases in the number of running sessions and total mileage per week should occur gradually over a period of weeks to months.

“Listen to your body,” he said.  “Some weeks you might run fewer miles than you did the week before. That’s alright. Running is not a perfectly straight upward slope of growth.” 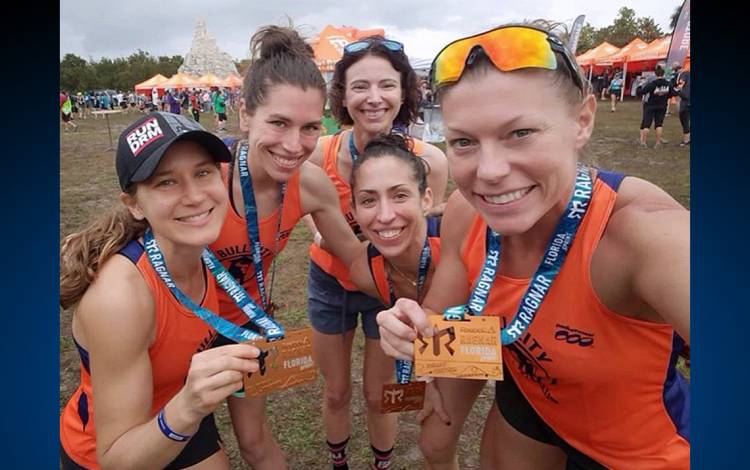 An unexpected joy of running for Kara Bonneau, who is competing in the Ironman Western Australia in December, has been making new friends.

Bonneau participates in the Bull City Running Club’s weekly groups and runs with friends on weekends. The weekend exercises often end in long conversations over coffee and brunch.

“Friends can be the difference-maker when you’re tired or it’s cold outside,” Bonneau said. “They can be what gets you out the door.”

If you’re looking for a running group, join the Duke Run/Walk Club. The 12-week program begins March 9 and is free for staff and faculty of all fitness levels. LIVE FOR LIFE, Duke’s employee wellness program, organizes the club, which meets on Mondays and Wednesdays on East and West campuses.

Stretch and take days off 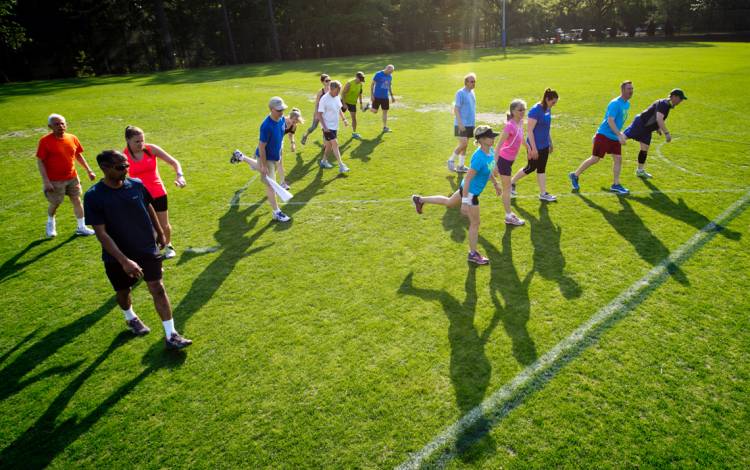 Christian Kennicott, fitness specialist for LIVE FOR LIFE, Duke’s employee wellness program, begins and ends every Run/Walk Club session with a series of high kicks, leg swings and other dynamic movements. He also throws a football with other participants before running. He focuses on three to four dynamic stretches, which keep muscles and joints moving through a range of motion.

“Dynamic stretching activates your muscles for what they’re about to do,” Kennicott said. “You’re prepping your body for what it’s about to experience.”

See here for stretches you can do at your desk.

Get the right shoes 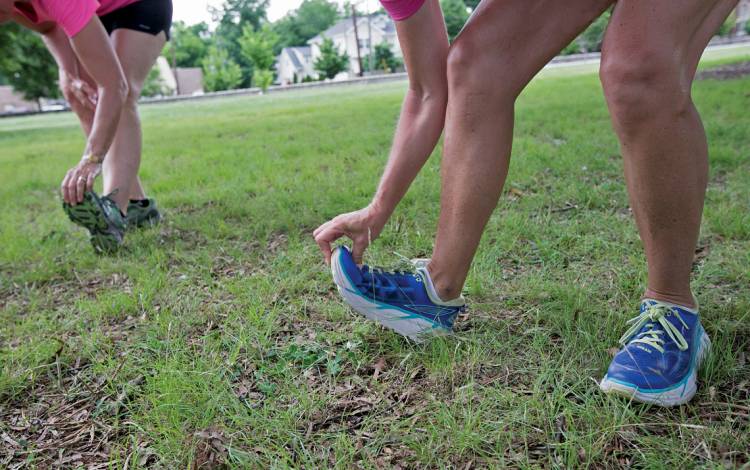 Hunter Spotts it out the door of his Cary home by 5 a.m. most mornings to complete an 8 to 10-mile run.

He leaves the house wearing a headlamp, reflective vest and holster to carry water and his phone.

The most important running tool? The shoe. Spotts suggests shopping at specialized stores that sell running shoes and working with a sales associate who can equip you with the right shoe type and size.

It’s important to consider your foot type, the surface you’re running on and how many miles you’re completing. Replace your shoes roughly every 350 miles, Spotts said.

“Do your research and talk to experts,” he said. “It’s going to be a lot harder to finish a run if you’re uncomfortable or getting injured by wearing the wrong shoe.” 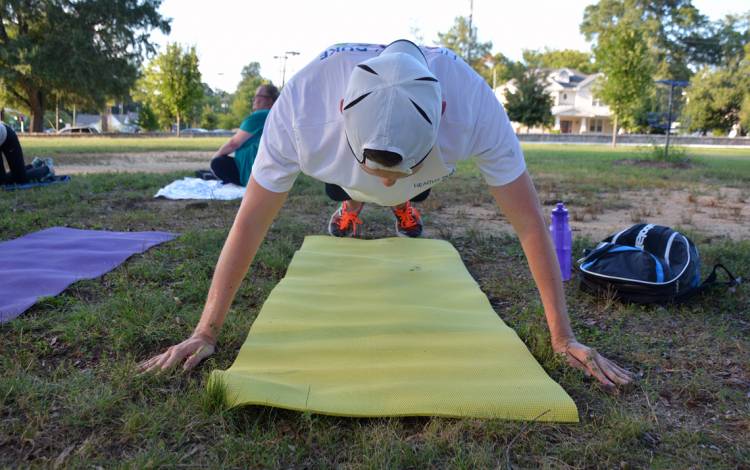 Cross training involves alternating workout routines such as weights, swimming and yoga to increase your overall fitness without stressing your body. It’s beneficial to runners and walkers because the activities fight off injuries, shorten recovery time and make you faster.

VIDEO: Incorporate these strength exercises into your workout:

Have a fitness story or other news? Share it with Working@Duke

Working from home? Consider these suggestions for your workspace