Sally Neve was nominated by LIVE FOR LIFE colleague Esther Granville, who wrote that Neve “is dependable and knowledgeable, professional and detail-oriented. She receives high scores from the employees she coaches, particularly our pre-bariatric and post-bariatric participants.”

What she does at Duke: Neve, a registered dietitian and nutritionist, knows plenty about the science of losing weight. But one of her important skills is her ability to connect with patients.

Many people Neve helps are part of the Pathways to Change Health Coaching program. This program assists obese Duke employees or dependents covered by Duke insurance who are preparing for bariatric surgery or are working on maintaining a healthy lifestyle after weight loss surgery.

Neve works with around 100 benefits-eligible participants in the year-long program, helping them craft and complete a unique roadmap for their journey to a healthier life.

“While we may be the expert on some things, they’re the experts on themselves, their lives, what they need and how they can see change in themselves,” Neve said.

Neve often works with people who have been unsuccessful in previous attempts to lose weight and reverse health concerns that accompany obesity, such as high blood pressure, diabetes and an increased risk of heart disease and stroke. That’s why Neve builds confidence through setting small personal goals such as being able to play with grandchildren or not needing an extender for airplane seatbelts.

“We live in the real world, it can be tough,” Neve said. “But are there enough success stories to keep me going? Yes. Yes there are. Absolutely.”

What she loves about Duke: With a client list that’s drawn from all corners of Duke, Neve appreciates that her role puts her in contact with a wide variety of people.

“Bus drivers or surgeons, I see everybody,” Neve said. “I like meeting people. I like that, with this job, it’s not a one-time thing where you do what you can do in an hour. I get to know these people.

Memorable days at work: Neve occasionally gets thank-you notes or cards from participants she’s helped. But when someone comes back to the LIVE FOR LIFE clinic to see her in person, it’s especially moving.

What she couldn’t do her job without: Neve works in a shared office with six other LIVE FOR LIFE colleagues. She said the energetic, positive vibe in the workspace helps make work fun.

“We like to talk about stuff other than work,” Neve said. “Hearing about co-workers’ families and other fun activities reminds us that we’re people instead of employees doing the same thing.”

First ever job: As a first-year student at Rutgers University, Neve got a job in one of the dining halls. Among her first duties was washing dishes.

She ended up working at the dining hall all four years, eventually working her way up to the position of student manager, where she oversaw the roughly 100 students who had roles on the facility’s staff.

“I think that helped teach me that you have to start on the bottom rung, be humble and understand that you don’t know everything and you have to work your way up,” Neve said. 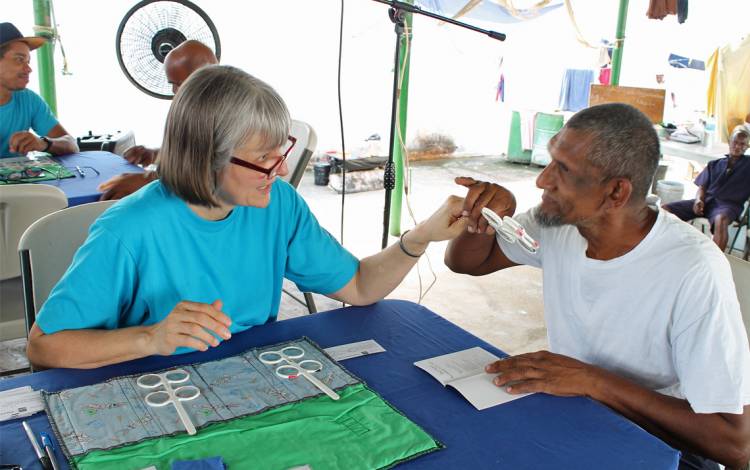 Something most people don’t know about her: Neve tries to put her faith to work by helping others. As part of this, she has participated in charity work in the Caribbean with Operation Mobilization, a Christian missionary group.

Closer to home, she takes time to visit with several senior citizens who live near her north Durham home, often bringing them meals and providing companionship.

“It’s not a formal thing,” Neve said. “I guess I do it because I see myself going there one day and not everybody has family that’s there to see them through.”