Sherilynn Black was well-prepared for Duke’s Living While Black symposium last summer when Black members of the Duke community shared personal stories of racism and discrimination and presented research on racial inequities.

In the week leading up to the event, she spent nearly 12 hours a day on Zoom, organizing themes for sessions, troubleshooting technical issues and preparing messages. As the event drew near, she developed a scratchy throat but didn’t think much of it until she woke up the morning before the event with no voice. 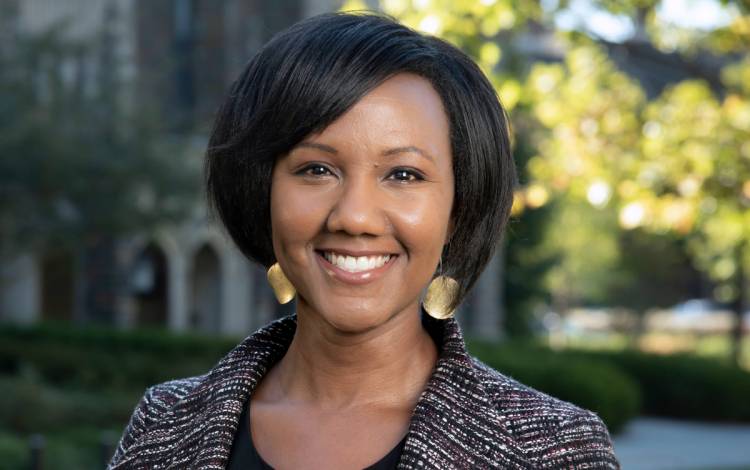 “Nothing was coming out,” said Black, associate vice provost for Duke Faculty Advancement. “I managed to participate in the event the next day, but my voice seemed to never recover. I was a bit hoarse through the rest of the summer.”

Black received treatment at Duke Voice Care Center, where she worked with Cristen Paige, to recover her voice. Paige, a speech language pathologist, gave Black a series of throat and tongue stretches to do daily and asked her to rest her voice between meetings, to complement her voice exercises.

Paige said her colleagues at the Duke Voice Care Center have seen patients who are facing new challenges with their voices because of a reliance on virtual meetings due to the pandemic. In online settings, meeting participants may speak over background noise or talk louder to compensate for streaming or other technical difficulties.

“When we’re talking over the phone, on a video call or with a mask on, we tend to speak louder because we’re trying to make up for the fact that we’re not communicating face to face,” Paige said. “That strains your vocal cords. It irritates them.”

Paige explained that higher voice demands can lead to swelling and inflammation of your voice box. Hoarseness, strain and loss of vocal range are among symptoms of vocal issues, but here’s how you can take care of your voice. 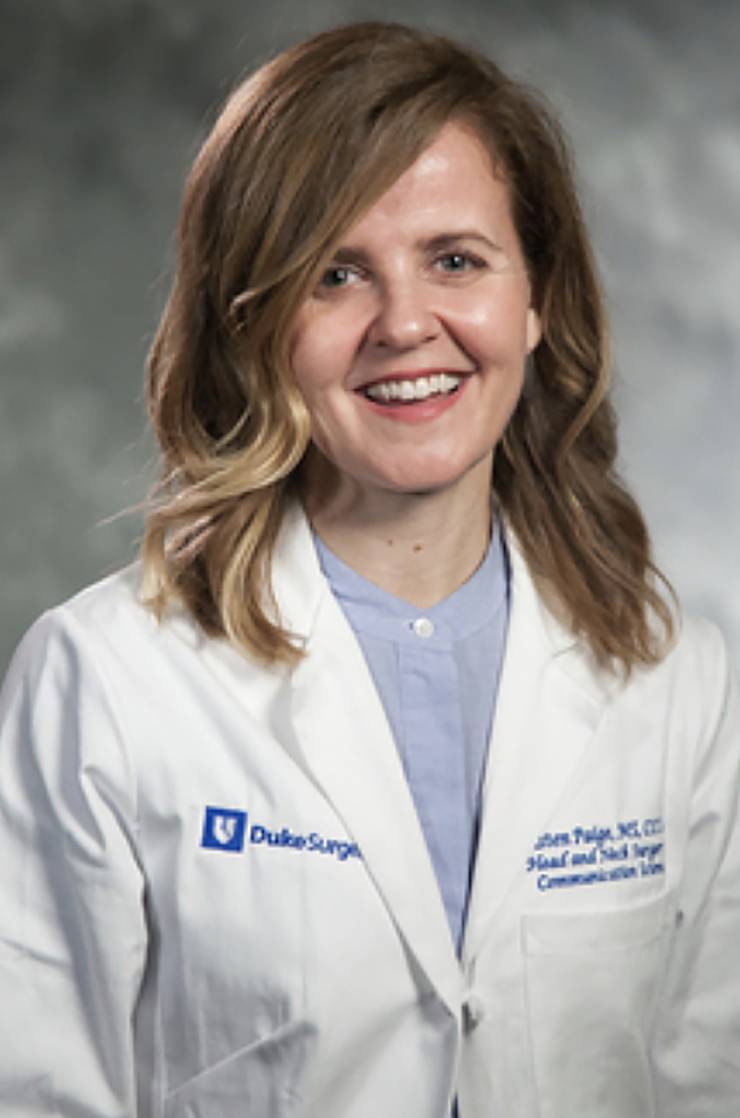 Follow the “60-10 Rule” when it comes to pacing your voice use. A 10-minute break of voice rest should occur after every 60 minutes of speaking. Resting helps relax throat muscles and reduce vocal cord swelling.

“Vocal cords are like any other muscle in your body,” Paige said. “You want to give your cords multiple opportunities to take a break to avoid a more serious voice injury.”

Since working with Paige, Sherilynn Black has adjusted her schedule to allow for adequate vocal rest between meetings. She’s reduced meetings from an hour to 45 or 50 minutes and sits in complete silence between calls.

“I was allowing myself to move, move, move without considering my well-being,” Black said. “I needed someone to tell me to stop going from meeting to meeting and take a break. It’s made me feel so much better.”

Drink additional water if you’re consuming caffeine or alcohol because these beverages can dry out your throat and vocal cords. If you have 12 ounces of coffee, drink an additional 12 ounces of water.

“Have a glass of water next to you at all times,” Paige said. “Taking frequent sips is going to keep your voice healthy.” 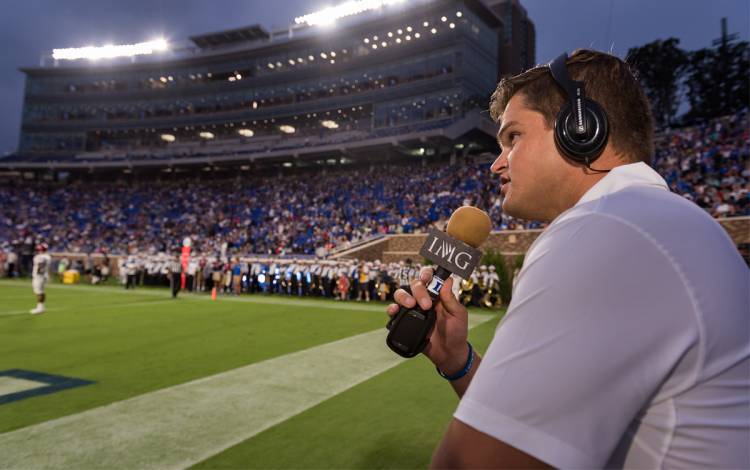 On game days for Duke Football, Broadcaster Dave Harding can spend up to six hours talking for pre-game shows, providing live commentary during the game and contributing to post-game analysis for the Blue Devil Network.

Harding carries a gallon jug of water during game days.

“I keep my vocal cords well hydrated,” said Harding, an executive director of the Blue Devil Network. “I find that my vocal performance is much better when I’m drinking water.”

Earbuds or a headset with a built-in microphone allows you to hear better and control your speaking volume.

Paige said the better you hear people, the less inclined you are to speak loudly. In other words, talk in a place where you don’t strain your voice to compete with other sounds in the environment. She cautions against using noise-canceling headphones because they don’t let you determine how loud you’re talking.

“We almost always increase our speaking volume when we don’t hear ourselves or others well,” Paige said. “You should be speaking at the same volume as if the person was across the dinner table from you.” 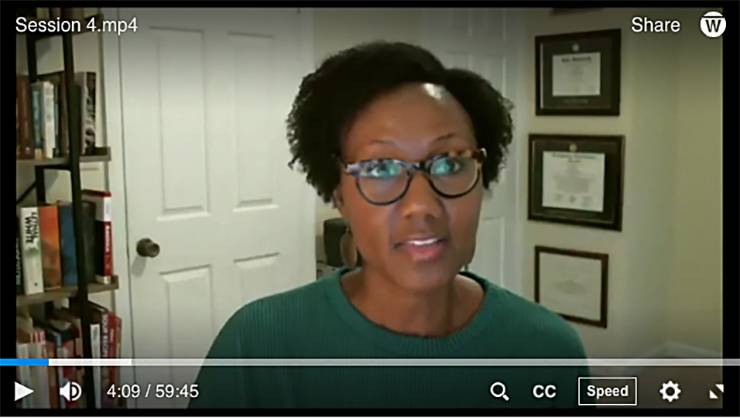 Sherilynn Black started wearing headphones for video calls after she lost her voice in June. She usually uses one earbud so she can hear how loud she’s talking during a meeting.

“The headphones have helped because it sounds as if everyone is physically closer,” Black said. “I’m much more aware of how I’m modulating my voice.”

Paige said to seek medical care if you experience hoarseness, throat irritation or your voice isn’t at its usual strength after two weeks. 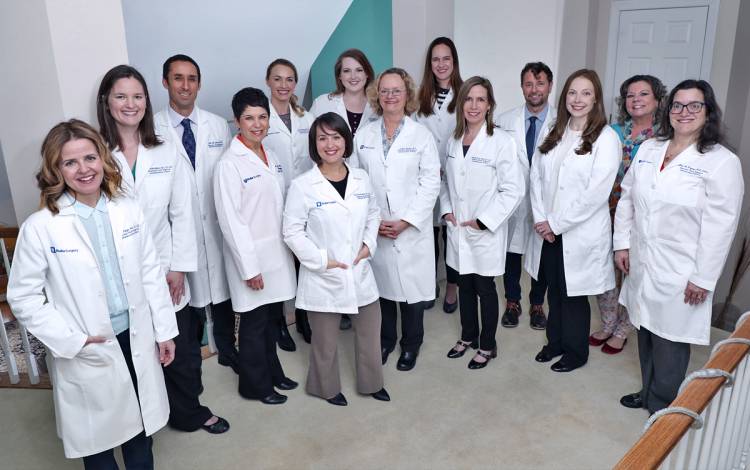 Laryngologist and speech pathologists can help diagnose a condition and provide appropriate care for getting your voice back to normal.

“Battling an ailing voice for too long could cause more harm,” Paige said. “Are you taking the appropriate preventive measures like drinking enough water and taking voice breaks?  Your body sends you warning signs if something is wrong. Be kind to your voice. Listen to it and take care of it.”

Send us your story ideas, shout-outs and photographs through this story idea form or write us at working@duke.edu.