As the university observers Veterans Day, we recognize the more than 1,000 military affiliated students, faculty and staff on our campus.

Duke has maintained supportive ties with the US military  since its founding nearly a century ago. Today that support takes many forms, including classroom learning, research and partnerships with the military and allies, and building a community of veterans and military affiliates on campus. [Read a statement from President Price honoring veterans here.]

Below are several ways that Duke works with military veterans both on campus and in the community at large. 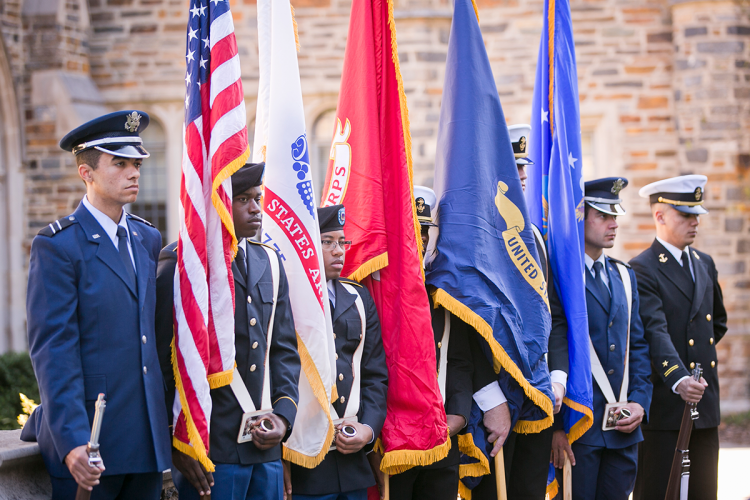 Hundreds of members of the Duke community will gather at Duke Chapel to honor veterans and their service at 11 a.m. Monday, in Duke Chapel.

This year’s ceremony is that it will be the first organized by the Duke Military Alliance, a newly formed affinity group for military veterans working at Duke. Dean Taylor, sports medicine orthopedic surgeon and colonel, US Army (retired), will deliver remarks.

There are also permanent monuments to veterans and their service on campus. The Memorial Wall between Duke Chapel and the Divinity School lists the more than 50 Duke community members who died in service during wars after World War II. Across campus, in the Brodie Gym – which once was named Memorial Gym – a large plaque recognizes those who died during World Wars I and II.

DID YOU KNOW? On the hospital side, the 65th General Hospital Memorial  statue features four life-size figures -- an injured soldier, a physician, a nurse and a corpsman, commemorating the Duke doctors and nurses who served in a highly decorated medical unit during World War II.

From Duke’s close relationship with the Durham Veteran’s Affairs Hospital to Duke research on drones and port security, academic scholarship is being translated into stronger national security and improved care for veterans.

Typical of that work is an ongoing project by Professor Katherine Hall, who works with older, Vietnam War veterans who continue to experience PTSD. It’s a population that is rarely served by many existing PTSD treatment programs, which usually focus on younger veterans. Hall believes their trauma symptoms can be reduced through a formal exercise regimen. Initial results are strongly positive.

Duke research is helping veterans in other ways as well. The Department of Veterans Affairs sponsors a study at the Diet and Fitness Center, which indicates that adding weight loss counseling to a treatment program can help people better control diabetes symptoms. In another project, Duke researchers are studying mesothelioma in military service members.

DID YOU KNOW? Congressional staff interested in military issues recently visited Duke to hear from a variety of researchers from both the campus and medical sides. 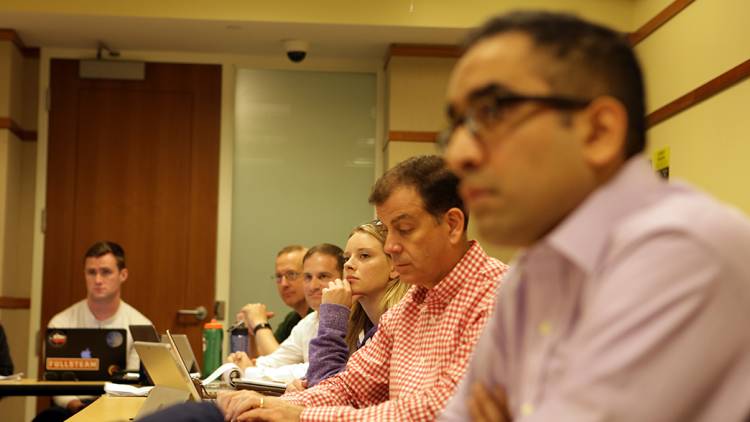 Earlier this year, a group of Duke faculty and students visited Fort Bragg for an unusual classroom exercise. Their mission: To simulate how US Special Forces can best get medical care to units in a middle of a fight.

The exercise was part of “The Hacking for Defense” program where the Department of Defense works with universities to create partnering an interdisciplinary group of students with military officers. The goal is to have smart thinkers from outside the military looking at challenging problems and coming up with creative solutions.

The academic mission goes in the other direction as well. Military officers come to Duke for classroom learning. The most notable is the Sanford School’s Counterterrorism and Public Policy program, which brings in four to six officers a year to regularly meet with senior military and government leaders in small group sessions as well as receive instruction in courses of their choosing.

DID YOU KNOW? Recent speakers at Duke have included the Retired U.S. Army Gen. Stanley McChrystal, who commanded U.S. and International Security Assistance Forces in Afghanistan, and Gen. Lori Robinson, the first ever female combatant commander in the US Air Force. Read about the speakers here. 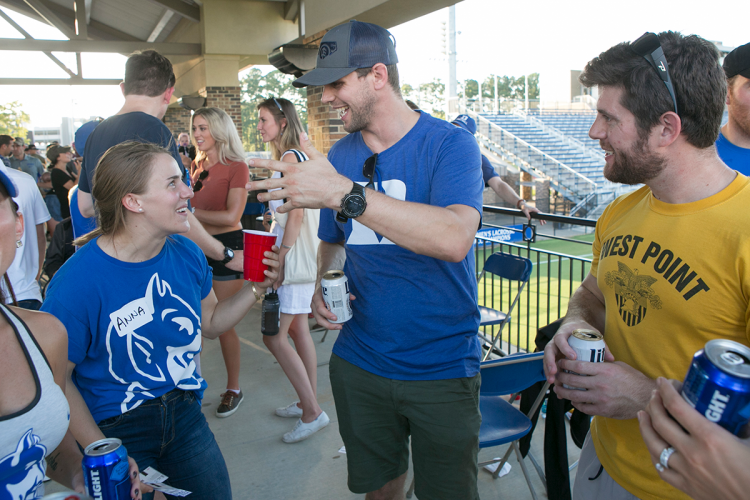 As veterans became one of the fastest growing populations in Duke’s student body, and the numbers of veteran employees also grew, Duke officials developed programs to support them in their transition to the civilian population.

The Duke Military Association is the most recent addition to this effort. Open to all Duke employees whether they are veterans or allied civilians, the association looks to raise the profile of veterans on campus and find opportunities to serve the wider community.

There can be special challenges for student veterans. Some in professional schools are still active duty and are trying to accelerate their degree while raising families. To help them, Duke Student Affairs has developed several initiatives, amplified by additional programs in several of the professional schools.

The result is a range of activities including a 5K fundraising fund for a local charity; football tailgate gatherings; workshops with local employers concerning job opportunities for veterans; and the annual Valor games, in which wounded veterans compete in archery, wheelchair basketball, powerlifting and other events.

DID YOU KNOW? Former Chair of the Joint Chiefs of Staff Gen. (Ret.) Martin Dempsey holds a master’s degree in English from Trinity College, as does Gen. (Ret.) Eric Shinseki, the former secretary of veteran’s affairs.

Behind the Scenes: Duke’s School of Nursing Building Reopens