She woke up early to exercise before taking her kids to summer camp. Lyven jumped on a stationary bike in her garage for a quick workout.

That’s when the worst headache of her life pulsed above her eye. Her neck was stiff and the pain was so bad she could barely see. She ran to the kitchen and called for help in slurred speech.

It's not too late to join Duke's Run/Walk Club, which is free for the Duke community and open to all fitness levels.

Lyven’s husband called 911, and paramedics rushed her to Duke University Hospital’s Emergency Department. She had a hemorrhagic stroke – her brain was bleeding.

“I didn’t understand why this was all happening,” said Lyven, now 41, a senior associate for patient safety at Duke University Hospital. “I was in great shape. There were never any signs something like this would happen.”

Erik Hauck, a neurosurgeon and assistant professor of neurosurgery at Duke, stopped the bleeding and removed the tangled blood vessels during a successful surgery. Lyven recovered for two weeks in intensive care and inpatient rehab.

A year later, Lyven underwent a diagnostic cerebral angiogram to ensure the tangle of blood vessels did not reform. During a follow-up appointment last year, she shared with Hauck that she completed her sixth marathon – her first race after the stroke.

Lyven’s story resonated with him, and he reflected on his own exercise routine. He occasionally walked around his Wake Forest neighborhood and visited the gym every few weeks to strength train.

“I remember telling her, “I certainly can start running if you can finish a marathon,’” said Hauck, 45. “I didn’t have a stroke or brain surgery. I didn’t have any excuses.” 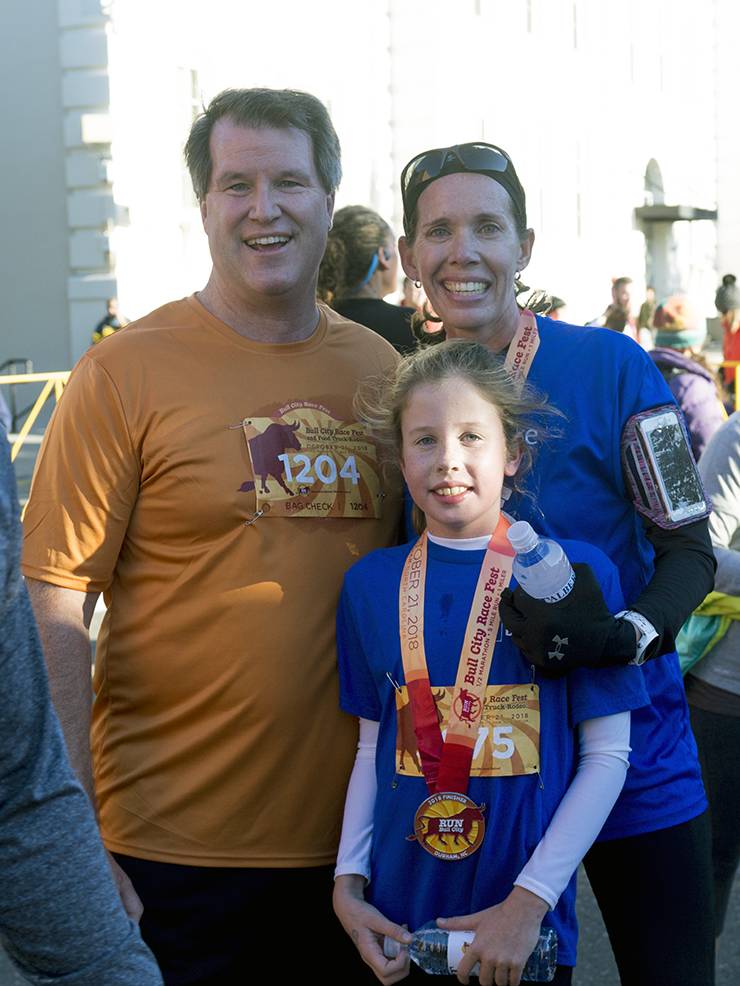 They ended up running Bull City Race Fest’s 5-mile run together last October and Tobacco Road Half Marathon in March. They continue to meet about once a week after work to run the Al Buehler Trail. Neurosurgery fellows, residents and faculty members occasionally join them.

Since Hauck started running, he has lost 50 pounds and notices his mood and endurance are elevated during the day.

“I feel myself getting faster and stronger every week,” he said. “This never would have happened without Kara’s motivation.”

Lyven is just grateful to be able to inspire Hauck after he saved her life.

“I remember the last thing he said to me before I went in for surgery was, 'We are going to take really good care of you,’” she said. “Now it’s my turn to return the favor.”