Rebecca Hoeffler, program and communications coordinator for Sustainable Duke, said one of the most encouraging results from Duke home football contests this season has been the work the Zero Waste Game Day volunteers haven’t had to do.

She’s heard from student volunteers who have approached pregame tailgates, ready to hand out recycling, compost and trash bags and inform fans about how to sort their waste so less of it ends up in the landfill, only to have fans say they’re already on top of it.

“The most important part about Zero Waste Football Games is the culture that it’s building,” Hoeffler said. “It’s educating visitors to campus that zero waste is important.”

In its fifth season, the Zero Waste Game Days, which are organized by Sustainable Duke and Duke Facilities Management, are one of the most visible sustainability initiatives on campus. And the lessons they’re trying to teach have taken root.

With the help of outside vendors who are increasingly using compostable cups and silverware at catered pregame events and of the 15-to-20 student volunteers and many University Environmental Services employees who help fans sort their recyclable and compostable waste, the Zero Waste Game Days have been a success. 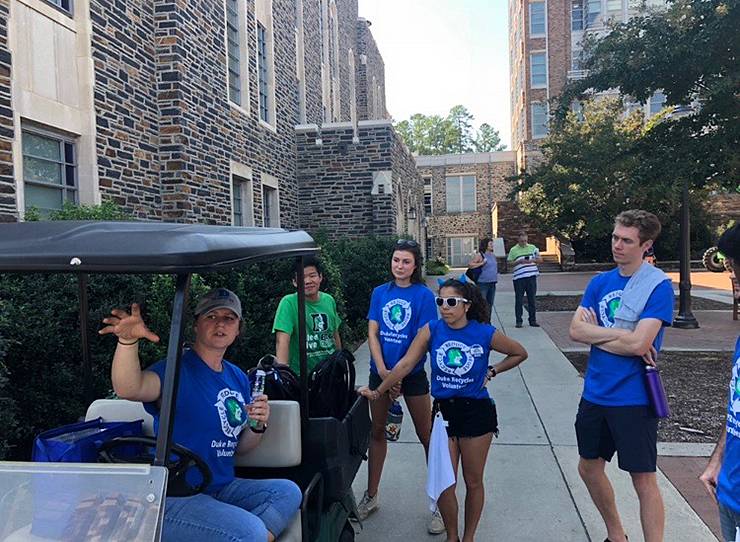 Since the Zero Waste Game Days began in 2014, the goal has been to have 90 percent of waste from each game either recycled or composted. In this season’s opener against Army, the most recent game where Zero Waste data is available, 85 percent of the waste was diverted from the landfill. So while there has been progress, there’s still work to be done.

In the 2015 season, Duke became the first school in the ACC to achieve a zero waste game day when it diverted 94 percent of recyclable and compostable materials in a game against University of Pittsburgh.

“The goal is for users to take a moment to sort their waste into reusable streams like compost and recycling, instead of just throwing everything into a trash bin,” Hoeffler said. “They’re doing that.”

The Blue Devils return home Saturday to face Virginia. As part of the Zero Waste Game Day, Sustainable Duke will take over Duke Athletics’ Snapchat account and Instagram stories to amplify the sustainability message prior to kickoff.