What she does at Duke: Early in her career as a clinical psychologist, Dr. Angelo Tunno saw the effect of trauma on the communities she worked alongside. She saw patients whose physical and mental well-being were shaped by traumatic experiences, but who struggled to find support in wider society. That disconnect, between the toll trauma – whether in the form of a single difficult event or a long-term individual or collective hardship – takes on people, and the way that’s sometimes overlooked by the systems that shape lives, is now a central piece of Tunno’s work at Duke. 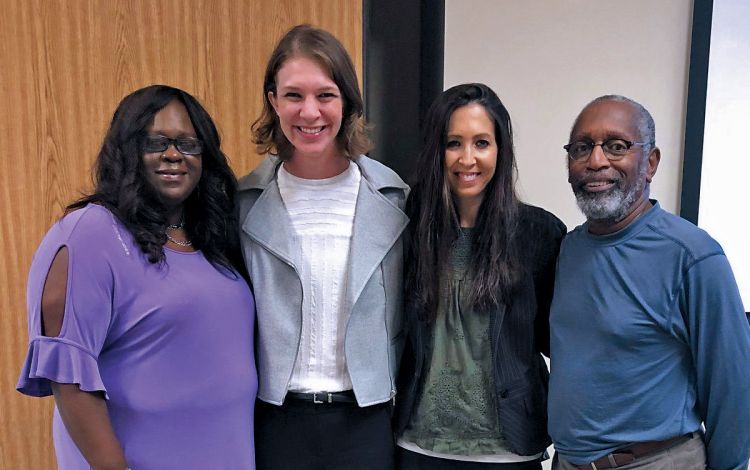 In her role as co-principal investigator with the Trauma-Informed Communities Project, Tunno works alongside communities in seven North Carolina counties helping develop comprehensive, trauma-informed community-led responses for children and families. To do this, she works with educators, health care providers, mental health professionals, religious leaders and those who work in the juvenile justice system or recreation organizations, offering information on the wide-ranging effects of childhood trauma. She’s also provided individualized coaching and support for these stakeholders as they work together to build a plan for how to identify and support children struggling to move forward from traumatic situations.

What she values about working here: In addition to her work helping community-level systems be better prepared to support children facing trauma, Tunno also sees young patients, adults and families  in her role as a clinical psychologist for the Duke Center for Adolescent and Young Adult Substance Use Treatment and the Duke Child and Family Study Center.

The opportunity to provide help to young people on an individual level, while also working on larger societal systems, is something Tunno is especially grateful to have.

Something people may not know about her: While in college at the University of South Carolina-Aiken, Tunno was a member of the school’s dance team. Often performing during school sporting events, her team also competed in dance competitions. During Tunno’s career, the team won the Peach Belt Conference championship and earned trips to the nationally-televised Universal Dance Association College Nationals in Orlando, Florida.

“People don’t always realize how much athleticism there is in dance, we had 5 a.m. training during competition season,” Tunno said.

While she still enjoys moving to music, she said her championship-level dance skills are long gone.

“I could try some of those old moves, but I’d probably break something,” Tunno said.

Forward Together: The Ingredients of a Strong Work Culture

Respect, encouragement, inclusion, and camaraderie contribute to a positive climate