Though a mosaic of purple, green, orange, blue and black acrylic paints has dried, a collaborative art piece installed in the lobby of the Duke Office of Information Technology’s administrative offices serves as a reminder that the work to foster diversity is not complete.

About 40 Duke community members cheered Aug. 29 as a covering on the art came down to reveal a colorful 4-by-6-foot logo for DiversifyIT representing unity in IT. DiversifyIT, a staff-led community working toward awareness and support for all identities in IT at Duke, organized the project, and the art will be located on the first floor of the Power House Building on Fuller Street in Durham. 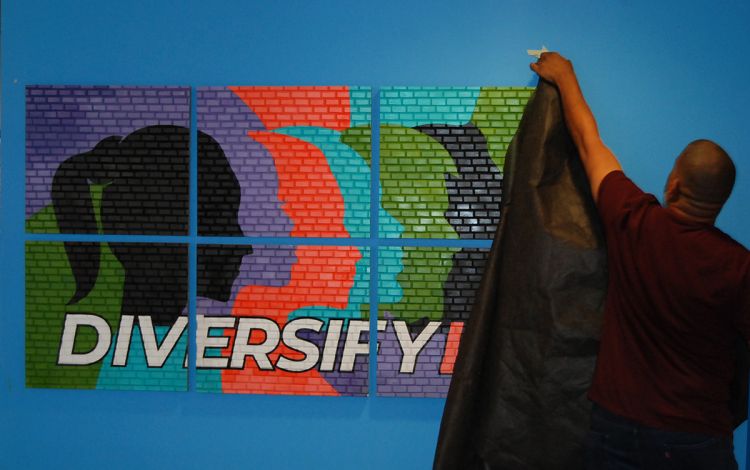 "I call this mural ‘A Work in Progress’ because I believed that knowing, bonding and connecting are far from over,” said J. Brandon Johnson, an IT analyst in Academic Media Services and the DiversifyIT Communications Committee Chair. “The threads that divide us continue to loom ever present and the challenges that face us in addressing them are as complicated as they are insidiously pervasive. Now that this torch that exemplified our empathy is lit, it will illuminate and inspire all who witness it."

Johnson created the original digital DiversifyIT logo using Photoshop and Adobe Illustrator in 2020. About 53 IT professionals from across Duke contributed to the painting project, which depicts the silhouettes of a variety of people representing diversity in IT. 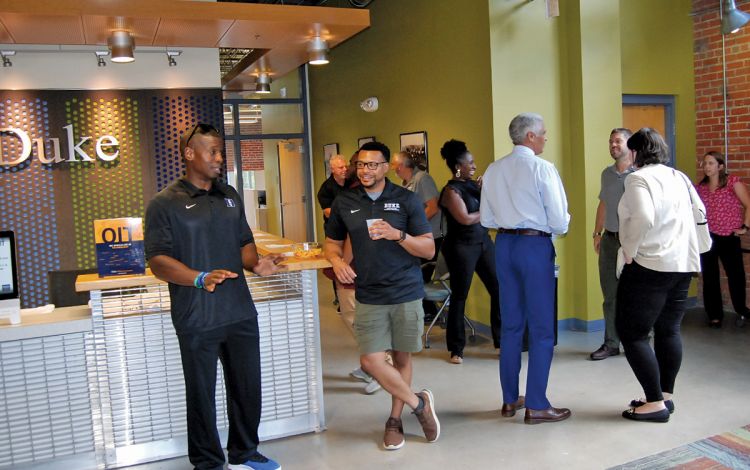 Johnson pitched the idea for the art to the DiversifyIT leadership team last year as an effort to build community. It was organized to mimic the fun of making childhood art as kids, which Johnson called the “purest form of connection.”

"DiversifyIT is where IT professionals at Duke make it possible to bring our whole selves to work," said Laura Webb, co-chair of DiversifyIT and project manager in OIT. "Creating this art display together has shown us one more way that people want to come together to have conversations that allow us to learn how to do that. There is no one right way to find those connections, but what does matter is bringing all our individual ‘pieces’ – seeing each piece, making room for each piece, valuing each piece."

During in-person events, attendees were encouraged to pick up a paint brush and add their own creativity to the work, even if only for a few minutes, while talking and spending time in community with colleagues. 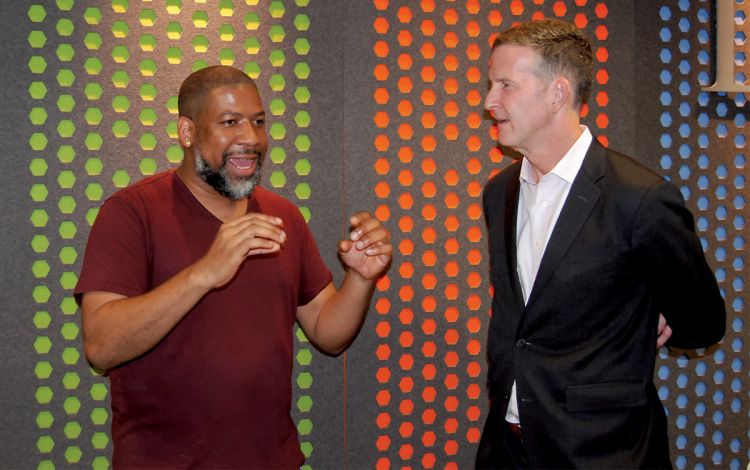 Futhey and Ennis each mentioned being struck by the dedication of the DiversityIT group to help support diversity, equity and inclusion on campus.

“DiversifyIT is just a spectacular organic effort to help build community and to create a sense of belonging for anyone from any background, any walk of life,” Ennis said. “It’s just added enormous impact, and if I could take what they’ve generated and all the energy, momentum and goodwill they’ve generated and replicate it across other departments, I would do it in a heartbeat.”

Information technology is a field historically dominated by white men. According to Zippia, 25 percent of tech jobs in the United States are held by women; Black Americans hold 7 percent of jobs in the U.S. tech sector.

The work of DiversifyIT, which has 337 members at Duke, improves the inclusivity and visibility of diversity in IT on campus. The art will be a symbol of diversity and their work. 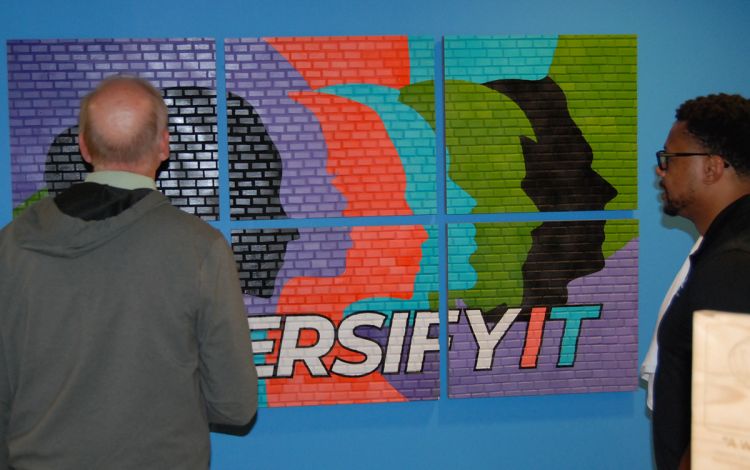 “When I first heard about DiversiftyIT, I thought it was a great way to create a conversation," said Adam To, Sr. Cloud Security Engineer in OIT. "A conversation can help create new awareness, understanding, and perspective, leading to collaboration and changes. This mural represents the start of that conversation.”