By the end of day 2 of David Zhu’s college career, fatigue was setting in.

“We’ve done a lot,” said Zhu, exhaling deeply while considering all that he’d taken on in his first 48 hours at Duke.

And that’s by design. Zhu is one of 1,740 new Duke students going through a new version of orientation program this week – an immersive, locally focused initiative called Experiential Orientation – that divides the students into 19 groups. Students in these themed groups are spending the week together – meeting new people, finding their way around campus, and venturing out into Durham to get a feel for the city they’ll call home for the next four years. 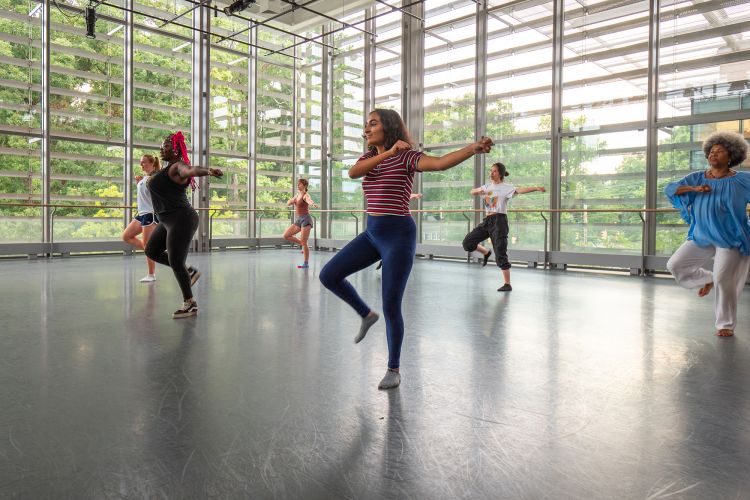 Zhu, a member of the Project SEED group that has a science and engineering focus, had attended a lecture by an engineering professor; met with the leader of a local Durham nonprofit agency; toured Duke Gardens and taken part in an East Campus scavenger hunt.

“It’s pretty helpful, said Zhu, who came to Duke from the state of Washington. “We’ve had tours around campus, and I feel like I know the campus pretty well on just my second day here.”

Zhu and his new classmates will be busy all week.  This new class of 2026 is Duke’s first to be fully immersed in the university’s new QuadEx living/learning initiative aimed at integrating students’ academic, social and residential experiences. They’ll live on East Campus – as first-year Duke students always do – but will have a connected West Campus residence hall community – a group of older students with whom they’ll be linked to socialize with and join for campus events and programs.

This connection is expected to create a larger, more inclusive community for new students, and making that connection all began with the new orientation program.

In Experiential Orientation, students engage in specific exploration projects on campus or in the broader Durham community. They’re designed to educate, build camaraderie, and, importantly – be fun and interesting.

“Experiential orientation is the most significant transition in the undergraduate onboarding experience since dedicating East Campus to first-year housing for the 1995-1996 academic year,” said Clay Adams, Duke’s vice dean of students. “It is designed to introduce QuadEx’s values and concepts. The entire orientation process has been designed to focus on developing community and sense of belonging.”

Students are having a broad breadth of experiences. 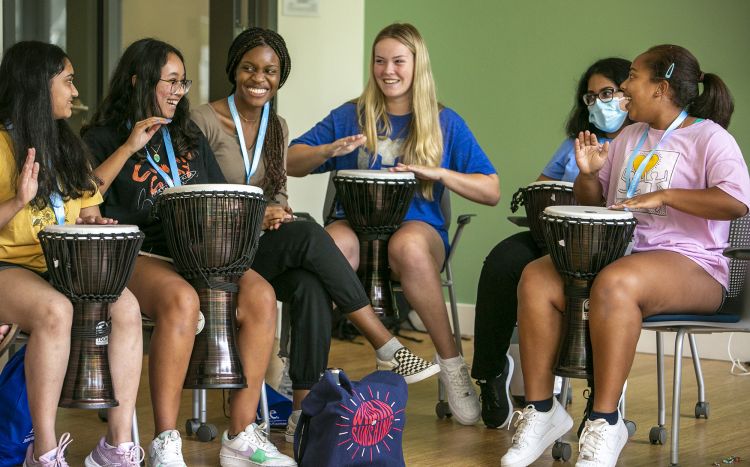 Members of the Project Wellness spent part of Monday in a drum circle. An instructor encouraged the group of about 60 students to break up in small groups and develop short drum rhythms together using their hands and a bongo drum. One by one, each group began to play their beats until the room filled with the sounds of different drum rhythms.

The small groups were challenged to listen to the sound of a different group and make their own drum beat match. After a few minutes, the different beats began sounding more and more similar until the sounds ultimately evolved into the same drum rhythm.

Students in Project Earth pruned and mulched with local arborists at a nearby Durham high school, the Southern School of Energy and Sustainability.

“This is all new for me, and it’s exciting,” said Ana Ramirez, an incoming freshman who moved to campus last Saturday from her home in Houston, Texas. Ramirez selected the Project Earth orientation because of its focus on the environment.

“The broader environmental movement is more of a grassroots movement, and I like that we each can take small steps to make a big wave,” said Ramirez, who plans to study cultural anthropology and economics. 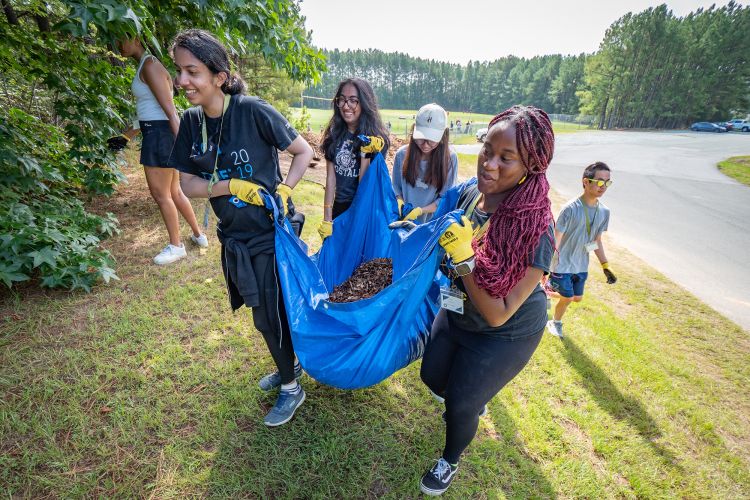 That project was one of many set in Durham, an intentional introduction to the city and wider region these students will call home for the next four years.

“Our students are traveling to Downtown Durham to visit with local start-ups, learn the history of this amazing city, and eat at its incredible restaurants,” said Ben Adams, Duke’s director of New Student and Family Programs. “They're going to RTP for lectures and tours of companies and labs. They're traveling across the Triangle to meet with non-profits and civic leaders. Duke is fortunate to be in such an incredible city and general location and we want our incoming students to know that the resources that Duke students gain by studying here extend far beyond our campus.”

Other students went farther. Two groups spent a few days in Washington D.C., taking part in a series of activities with the help of the university’s Duke in DC office. There, students met with Duke alumni, attended a performance of “American Prophet,” a musical about abolitionist Frederick Douglass written by Duke alumnus Charles Randolph-Wright (A.B. ’78), and visited embassies, Smithsonian museums and the U.S. Capitol. 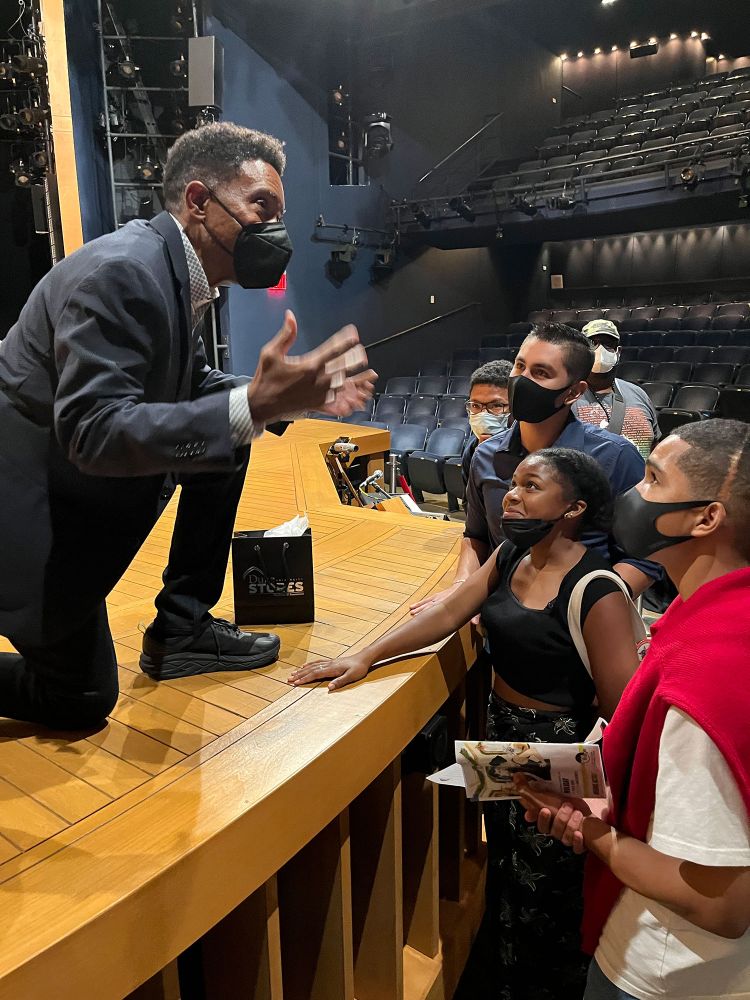 “Visiting the Capitol building – even though I’m from the area – was a better experience with my peers because it has built my confidence and pushed me to do things I never would have considered like reaching out the public officials in my home state,” said Tyné Kidd, an incoming first year from Maryland on the Project Citizen trip.

While this week offers plenty to learn, the programming also includes opportunities to relax a little. On Monday, students spent the evening at a block party at the Nasher Museum of Art and the Rubenstein Arts Center. The party featured food trucks, live music, a photo booth, a print-making area and other activities. On Tuesday, students headed downtown for a Durham Bulls game.

“This is an incredibly diverse community, and everyone is trying to meet everyone else,” said Zhu, the first-year student from Washington. “Everyone’s new, everyone’s trying to make friends and find their people.” 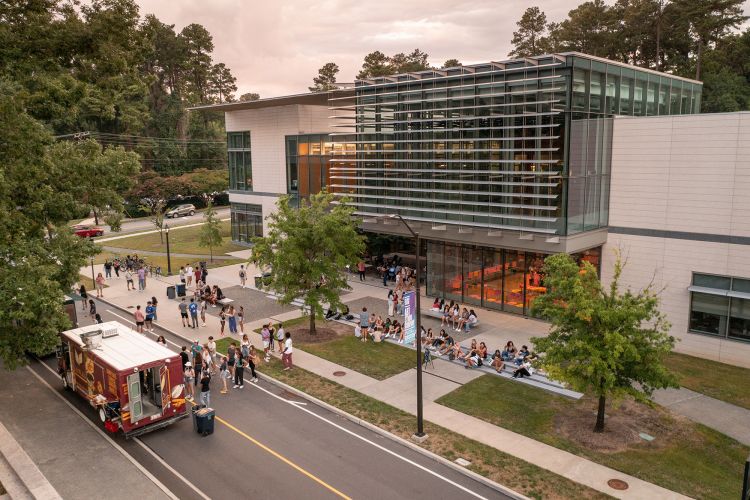 Register On Campus to Vote on Nov. 8