Mikhail Gorbachev was a talented politician who helped end the Cold War but could not control the forces that triggered the collapse of the Soviet Union, said Duke experts who were involved in and studied his legacy. The former Russian premier died Tuesday at age 91.

Cooperating with Presidents Ronald Reagan and George H.W. Bush, Gorbachev “negotiated an end to the Cold War and tamed a dangerous arms race,” Jack Matlock said Tuesday. “He then liberated the Soviet Union from its communist dictatorship, freeing its people to build a democratic future.” 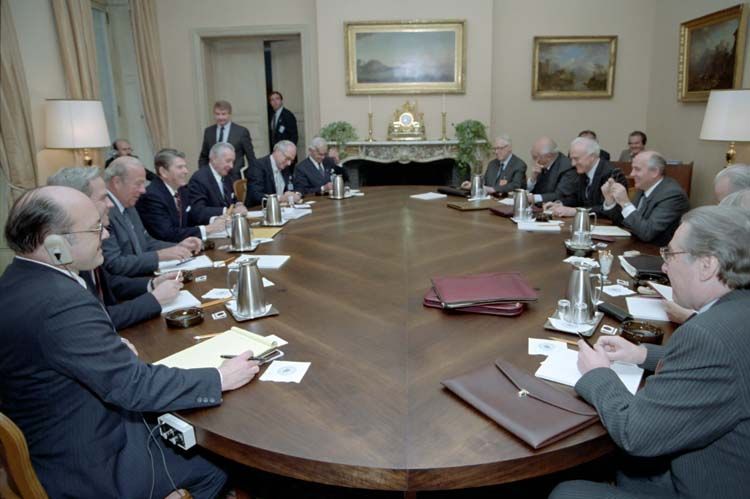 Matlock, who graduated from Duke in 1950, was a key adviser to President Reagan in the run-up to a crucial 1985 summit in Switzerland. He would later become Reagan's ambassador to the Soviet Union.

“Gorbachev should be remembered for his achievements and not for the failures of his successors,” Matlock said.

A former Rubenstein Fellow at Duke and still a visiting scholar, Matlock donated his voluminous collection of historical papers to Duke Libraries in 2019.

Simon Miles, an assistant professor in the Sanford School of Public Policy at Duke, is the author of “Engaging the Evil Empire,” an account of how Washington and Moscow ended the Cold War.

“Coming from a peasant background, Gorbachev led the Soviet Union through a period of unprecedented reform – democratizing life and liberalizing the economy – and ultimately its downfall,” Miles said. “Not even a talented and far-thinking politician like Gorbachev could control the forces which he unleashed in Soviet society which brought down the Soviet Union and put an end to the Cold War. Because of Gorbachev’s choices, this remaking of the international order was remarkably peaceful, for which he won a Nobel Prize.”

Life after the fall of communism was not kind to Gorbachev, Miles said.

“His passion project, the Gorbachev Foundation, saw its budget slashed by the state time and again; he was reduced to filming commercials for Pizza Hut and Louis Vuitton to make payroll and rent,” Miles said. “His attempt to return to politics in the 1996 Russian elections ended in humiliation, with barely 1 percent of the popular vote. And the erosion of democracy under Vladimir Putin has undone the democratic reforms he ushered in, just as the decline in relations between Putin and the West has undone many of Gorbachev’s foreign policy achievements.”

Gorbachev did not intend for the Soviet Union to collapse, but allowed it to happen, Miles said.

“He saw both his dreams and his nightmares for Russia come to fruition,” Miles said. “He gave Russia a chance to remake itself, one which many Russians seized; but today, to the extent to which he is remembered in Russia, it will by and large not be fondly.”

Tell Us About A Book You Love