As one of his final acts as Vice President of Administration at Duke University, Kyle Cavanaugh welcomed the individual and team winners of this year’s Presidential Awards during the ceremony held on Wednesday afternoon in Page Auditorium.

Little did he know that he’d be invited back on stage later to be recognized with his own award.

Cavanaugh, who will step down from his role in May after 13 years at Duke to become the president of administration for the National Basketball Association, was announced as the inaugural recipient of the Kyle J. Cavanaugh Award for Leadership and Service, to be awarded periodically by the President to staff and faculty for exceptional contributions to Duke.

“For over a decade, Kyle has been a committed advocate for all Duke employees—significantly expanding campus operations, protecting our staff, faculty, and students, overseeing the implementation of new employee benefits, and earning Duke recognition as one of the nation’s best places to work,” Price said. “But his most remarkable contribution has come in the past three years. Duke’s response to COVID has required an orchestra of people playing together, and Kyle has been the conductor—calmly and steadily overseeing everything from testing to the challenges of working remotely. The protocols that he helped design and implement have allowed our university to not only continue operations in the face of the pandemic, but indeed to thrive.”

After receiving the award, Cavanaugh said he was humbled to be recognized with an award named in his honor.

“It was such a surprise,” he said. “I never expected something like this, and it is a moment I and my family will always treasure. It has been an honor to work with such extraordinary people here at Duke.” 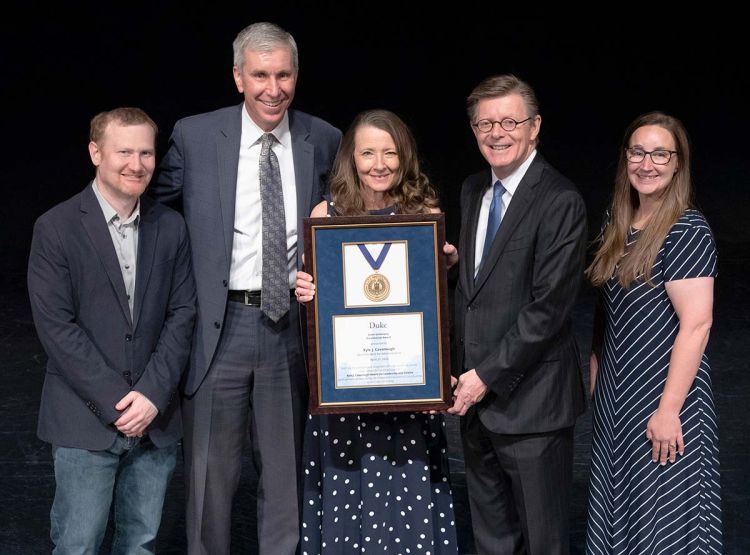