A few years ago, Christina Ryerson bought a stack of vintage postcards for three dollars from a flea market in Raleigh. Among the sights depicted in the colorful illustrations on the cards was a view of the inside of Duke University Chapel. 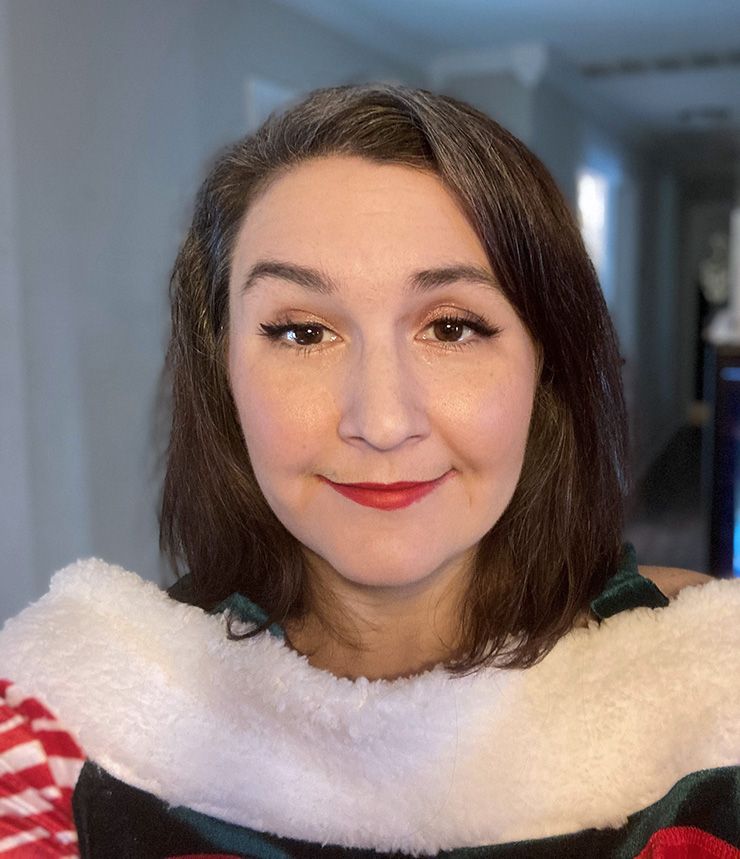 By this time, Ryerson had developed a hobby of finding vintage postcards and taking a photo showing the same image in the present day, creating neat side-by-side comparisons of places in Europe and North Carolina’s Outer Banks. And the postcard of the interior of Duke Chapel, with its rows of wooden pews, towering stone arches and ornate altar, would make for another neat image for her to recreate.

Last fall, Ryerson, who has worked as a fellowship coordinator for the Duke University School of Medicine since April 2020, but had yet to visit Duke Chapel, finally made it over to Duke Chapel. She booked a lunchtime appointment to visit by herself and spent time searching for the spot that matched her postcard.

By using stonework on the ceiling to line up the picture, Ryerson got her photo, creating a real-life version of her postcard from the 1950s.

“This is history,” Ryerson said. “I’ve been collecting postcards for a while because I was attracted to how beautiful they were. I just never thought of them as real places. So going there and trying to put yourself in the same spot, or have the same perspective somebody had years ago, is pretty cool.”

Inspired by Ryerson, we recently visited some spots on Duke’s campus and to recreate vintage images found in the Duke University Archives’ online galleries. 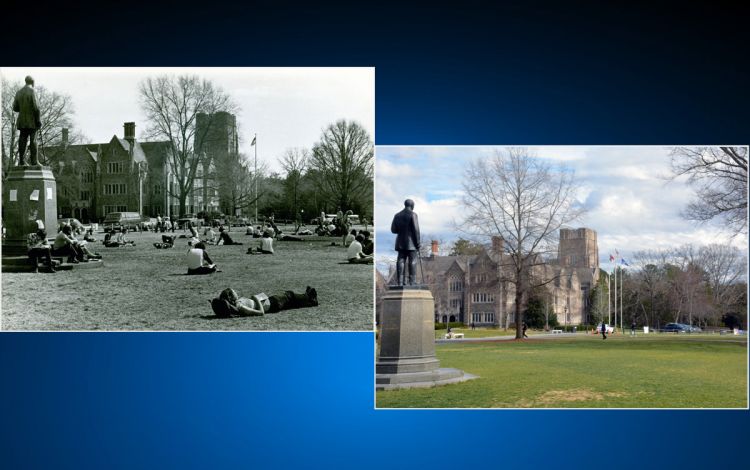 Abele Quad, the timeless heart of West Campus, looks much the same as it did today as it did in the 1970s. In the vintage picture, at left, students used the lawn for studying and socializing. Today, it’s popular with campus visitors who snap photos of Duke Chapel and the James B. Duke statue. 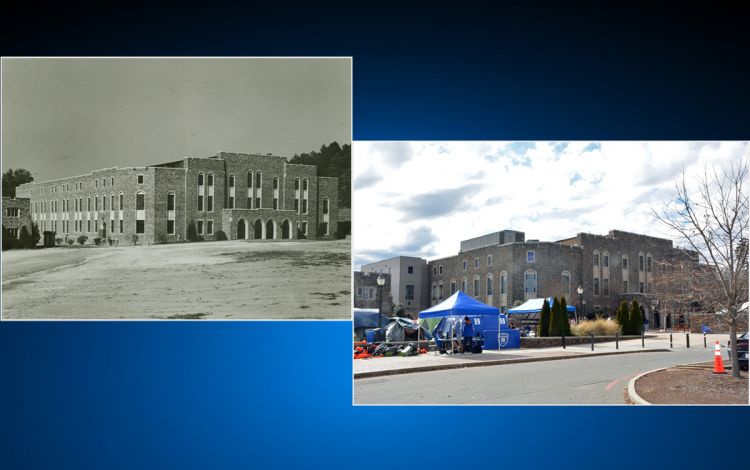 Few places on campus are as well-known and beloved as Cameron Indoor Stadium. In the photo on the left, taken in 1939, the building had yet to open. In the decades since, the arena has become hallowed basketball ground, serving as home to generations of star players, championship teams and the greatest coach the game has ever seen. 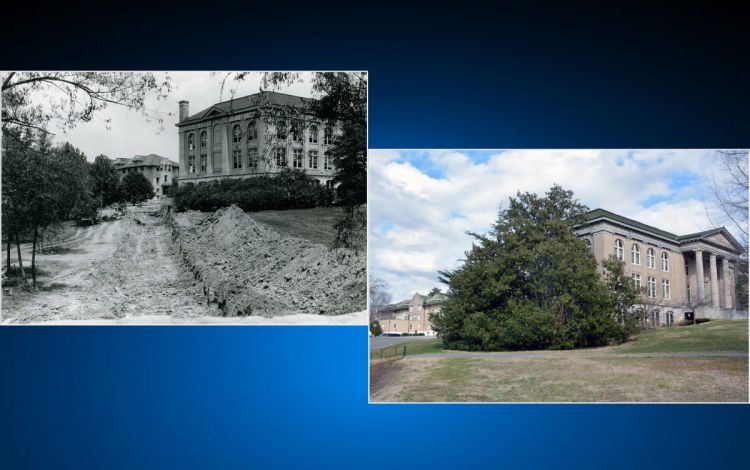 In the mid-1920s, as the East Campus Steam Plant was being built, the excavation for the circle of tunnels that would carry pipes and utilities to the buildings on East Campus chewed up the landscape. Decades later, as seen on the right, the tunnels are long since covered and East Campus is still served by a reliable utility infrastructure. 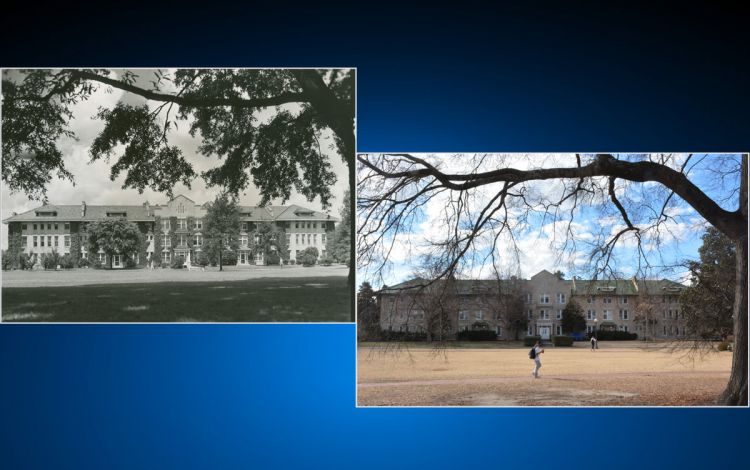 The West Residence Hall has been standing on East Campus since 1912. In the image on the left, the ivy that was allowed to grow up its walls can be seen. Seen in the photo on the right, the current look of East Campus is much the same, however, the ivy, which is an invasive species and not good for the buildings it grows on, is long gone. 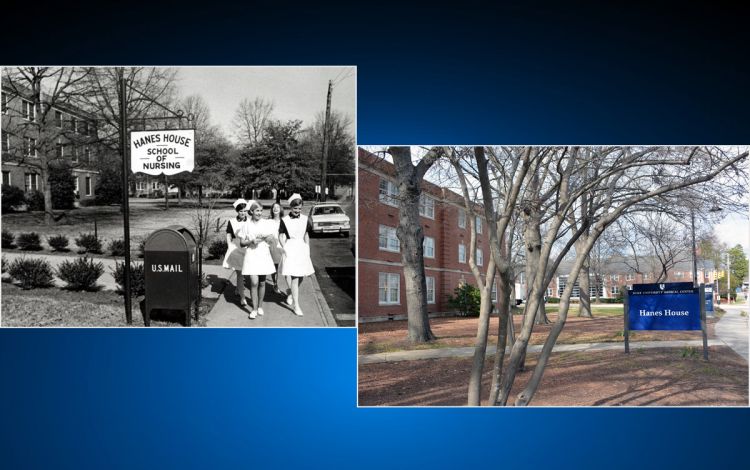 Built in 1952, Hanes House was originally a dormitory for students of the Duke University School of Nursing. Shown here in 1960, it was part of what was once known as “North Campus,” a collection of residence halls along Trent Drive. Now, Hanes House is filled with busy offices in the heart of a growing medical complex. 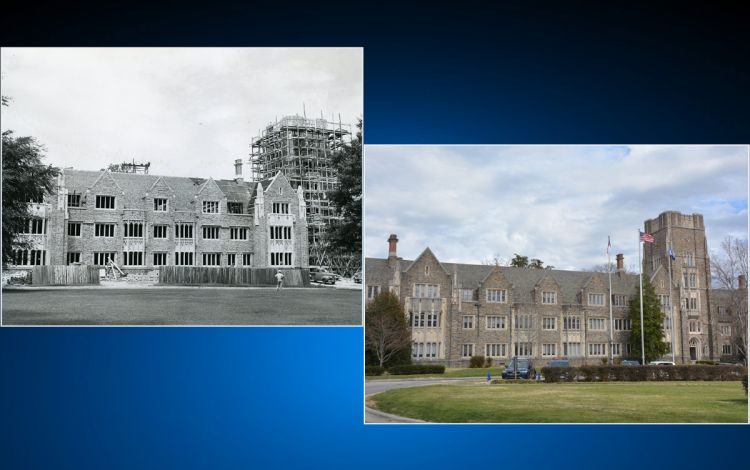 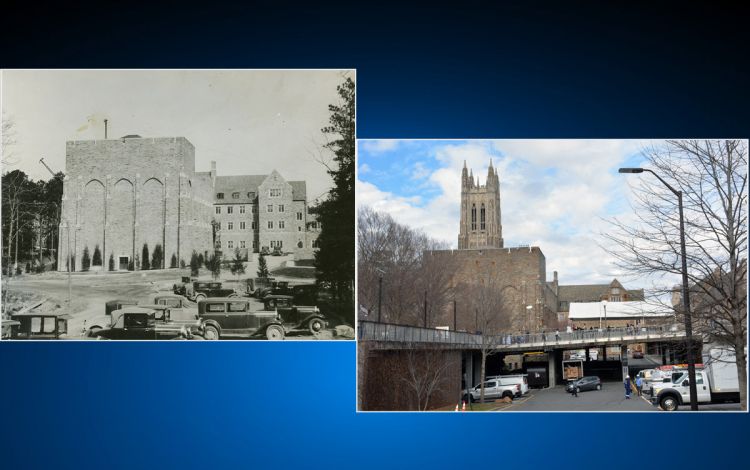 In the photo on the left, taken in 1931, the back of Page Auditorium is the most prominent structure on the back part of West Campus. But on the other side of Page, Duke’s iconic centerpiece is beginning to rise. Seen from the same vantage point now, Bryan Center Plaza fills what was once a grassy strip while Page Auditorium now sits in the shadow of Duke University Chapel.