At one point in Randy Arvay's remarks during Thursday's in-person Veterans Day ceremony in front of Duke University Chapel, the 23-year Army veteran and chief information security officer for Duke University Health System asked veterans among the few hundred people in attendance to raise their hands. 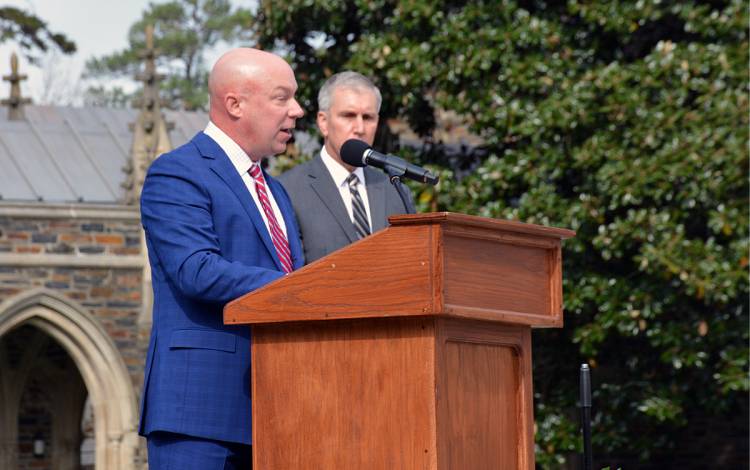 “You are part of an unbroken chain of patriots who have served this country with honor,” said Arvay, adjunct professor in the Pratt School of Engineering and graduate of the United States Military Academy at West Point. “Your service and sacrifices have contributed greatly to keeping our country safe and free.”

Duke's event honored the country’s approximately 19 million military veterans, as well as roughly 1,400 staff and faculty veterans among Duke’s workforce and around 680 students who have served or are serving in the miliary.

“You may not even know that veterans are working next to you until something like this comes along,” Arvay said later. “Being a service member, and knowing the common experience, I immediately know about the values and the work ethic these people have.”

The ceremony featured music by the John Brown Ensemble, remarks from Duke leaders and a solemn procession to the Duke Alumni Memorial Wall to honor service members.

“You may know these people by their name, but what’s more important is the character that they represent,” Duke Vice President for Administration Kyle Cavanaugh told attendees on Thursday. "They carry the banners, the values we hold dear, and set the example for all of us to follow. We gathered today to honor them for their selfless service and commitment to duty and country, that has preserved the freedoms we enjoy today and throughout our history.”

Here are some moments from the ceremony: 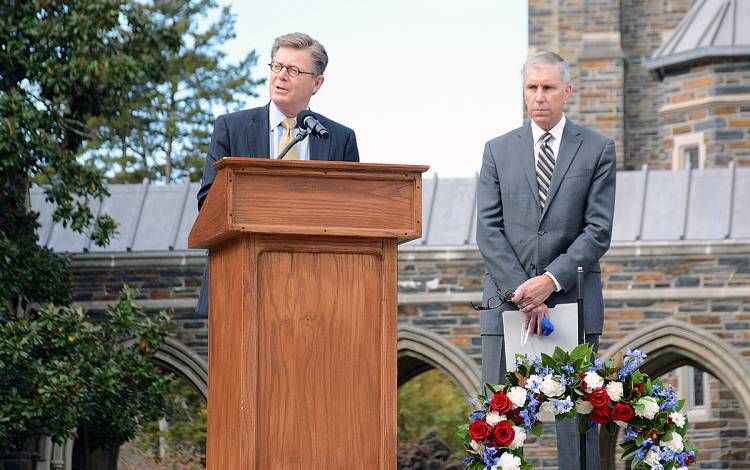 During his remarks, President Vincent E. Price contemplated the moment and called upon people to consider important reasons why Veterans Day is a special commemoration that causes pause each year. At Duke, he said, the holiday prompts him to remember that those who have dedicated themselves to serving the United States span the Duke community.

“Veterans Day is an important reminder of the service and sacrifice of so many members of our community,” Price said. “We’re proud to stand alongside our veterans and look forward to engaging with them throughout their time here on campus and throughout their lives.” 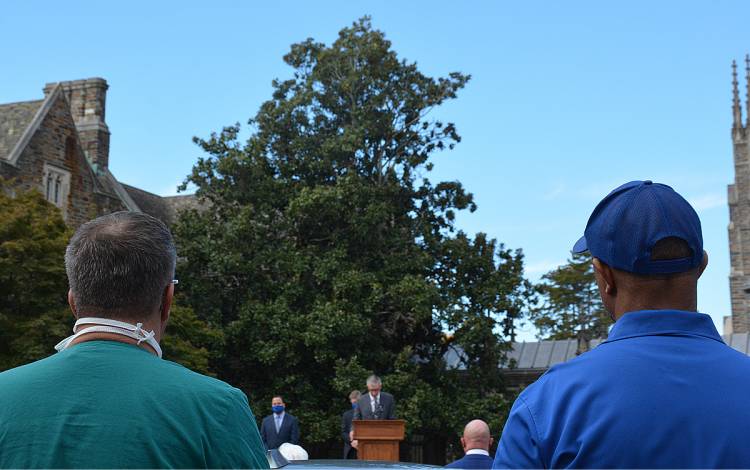 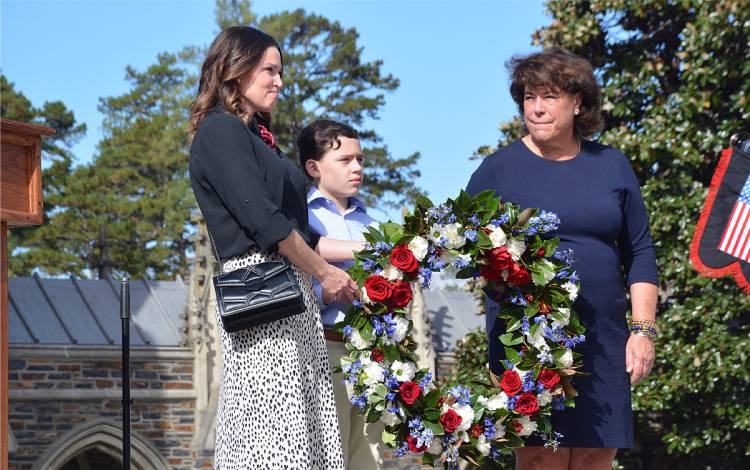 Duke honored the sacrifice of the late Maj. Agustin Gonzalez during the ceremony. Known as “Augie,” Gonzalez served four tours in Afghanistan, where he earned two Bronze Stars and two Meritorious Service Medals. He earned a master’s degree from the Sanford School of Public Policy at Duke in 2019. Shortly after earning his degree, Gonzalez, who was in route to Colorado to report for duty, was killed, along with his two young daughters, in a car crash.

Gonzalez’s widow, Melissa, and their eldest son, Nick, attended the ceremony. They received a wreath that they placed on the Duke Alumni Memorial Wall mear Duke University Chapel. 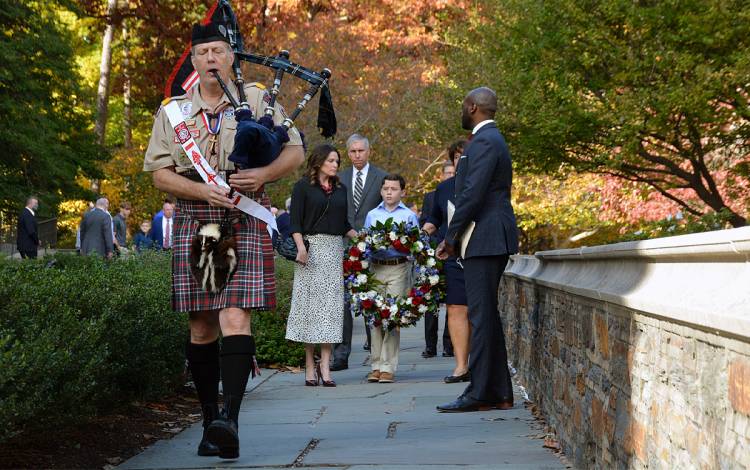 Playing the bagpipes, James Chambers led the crowd to the Duke Alumni Memorial Wall for the final portion of the ceremony while playing “Highland Cathedral.” Then, as the crowd gathered for the Gonzalez family to place a wreath on the memorial, he took a deep breath and began to play “Taps,” a bugle call that is played at military funerals and memorials.

About 15 years ago, Chambers played the song at the funeral for his father, a Korean War veteran who served in the 82nd Airborne. Playing it again reminded him of his father and all those who served and have died.

“It's a call to the blood, is what it is,” said Chambers, who has played the bag pipes for 28 years and previously worked for Duke Health Technology Services. "That tune is very reverent. It's not a march; it's meant to be played standing still. When I play it, it brings back all those souls that have gone before us that we played it for.” 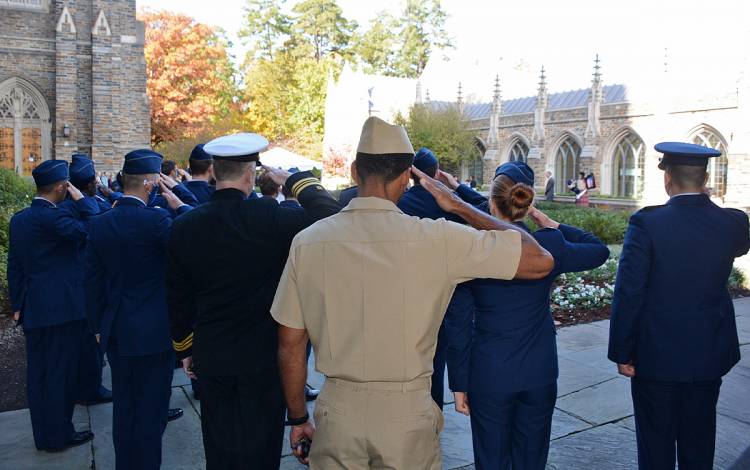 Lt. Levi Blackwell, a deputy professor with the Duke University Naval ROTC, saluted along with the rest of the members of Duke’s ROTC groups, during the ceremony at the Alumni Memorial Wall.

“Veterans Day shows that everything we do is not in vain," “It’s good to feel appreciated,” Blackwell said. "It’s a day to remember all of those who have served and still serve.” 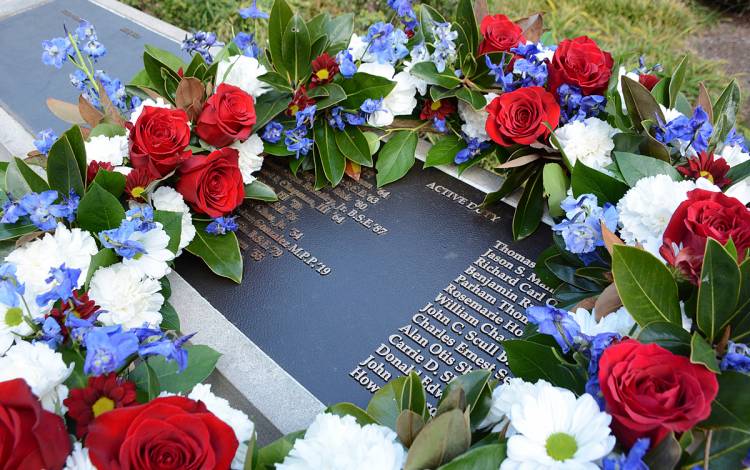 Antwan Lofton, associate vice president for staff and labor relations/staff and family programming in Duke Human Resources, initiated the wreath-laying ceremony to honor Agustin Gonzalez at the Duke Alumni Memorial Wall. Lofton led a brief moment of silence, which was one of the most meaningful aspects of the ceremony for him.

“There are so many freedoms we take for granted," said Lofton, "and in that moment of silence, those freedoms ring so loud."