It was work that focused on the smallest of details — the plaques on West Campus buildings — but it wasn’t a task that went unnoticed.

Using a hammer drill, silicone adhesive, level and rolling cart packed with new signs for the buildings, a crew made their way through Abele Quad as passersby continued around them.

Working as a team, the trio hung a plaque on a building about every 15 minutes, taking down weathered bronze signs near entrances and replacing them with modern aluminum signs that are Duke blue with white lettering.

“They look really, really great,” remarked Steven Cooley, project manager for Overstreet Sign Contractors, which installed the signs that were designed and developed by Duke Facilities Management. “They really pop off the Duke stone.”

Starting last week, 15 buildings surrounding Abele Quad on West Campus received 19 new plaques identifying their names more visibly to help with campus wayfinding and navigation. Placed near eye level, the new plaques catch the eyes, which is exactly what the project was designed to do. 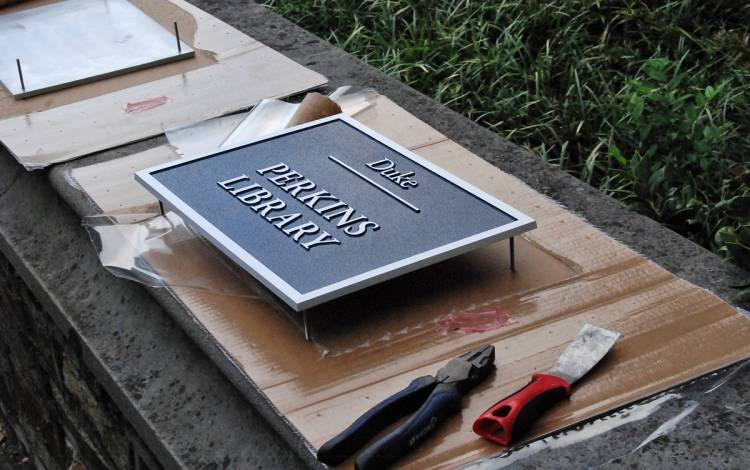 “The goal is to help with wayfinding. The historic plaques on Abele Quad buildings were small and bronze, making them hard to see from any distance,” said University Landscape Architect Mark Hough, who is the project lead responsible for exterior signage on campus. “It just wasn't clear to visitors where to go, and was perceived as not being welcoming.”

New plaques were put up along the exterior of buildings, including the Page Auditorium, the Allen Building, Divinity School, Brodhead Center, Bostock, Rubenstein and Perkins libraries and the Reuben-Cooke Building, which received its first exterior signs since being named after Wilhelmina Reuben-Cooke, one of the first five Black undergraduates to attend Duke. 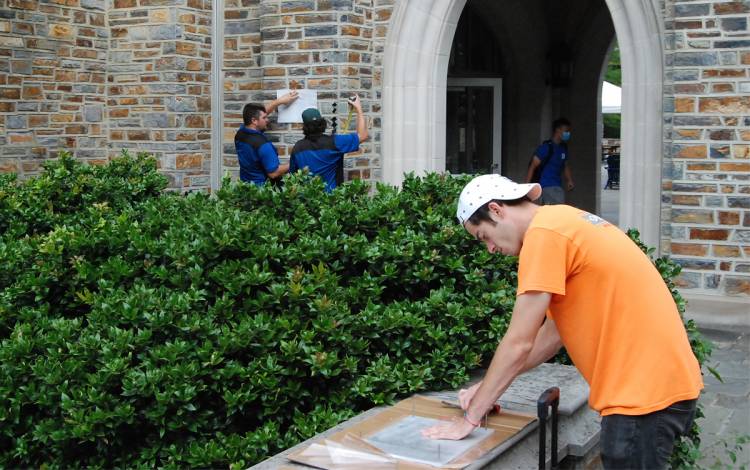 The Reuben-Cooke Building — previously known as the Sociology-Psychology Building — will be officially dedicated on Sept. 24, making the Duke pioneer the first Black woman to have a campus building named after her. The project that placed updated plaques bearing her name on the building coincides with the timing of the upcoming dedication.

Reuben-Cooke Building to Be Dedicated Sept. 24

The university community is invited to a public ceremony dedicating the Sociology-Psychology Building on West Campus for the late Wilhelmina Reuben-Cooke ’67, one of the “First Five” Black undergraduates at Duke.

The project is a compromise that both prioritizes the history of the buildings, while aiding navigation between buildings on campus. Old plaques will be offered to University Archives or stored for safe keeping by the Facilities Management Department. All new plaques on West Campus follow Duke exterior sign standards and were made by Overstreet Sign Contractors in Durham, the same company that created signs for the Duke University Health System, Cameron Indoor Stadium, and Brooks Field at Wallace Wade Stadium. 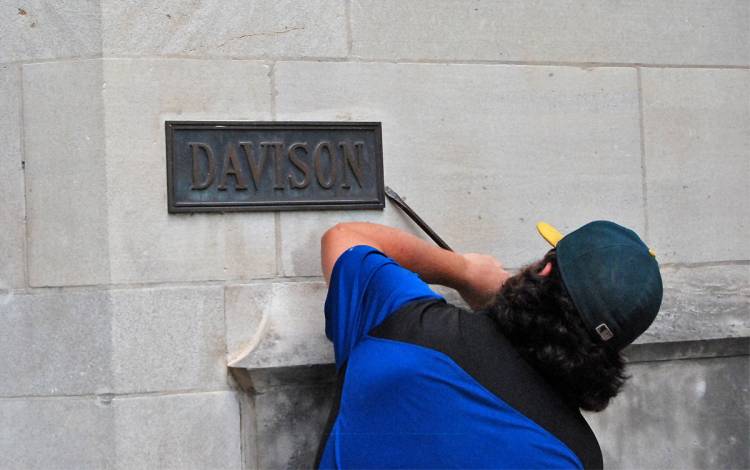 The largest 11 signs, 20 inches by 15 inches, were placed at primary main entrances to buildings. Eight other signs that are 16 inches by 11 inches were hung near side doors as secondary identifiers for buildings.

“It sends a signal to members of the public, to new members of our community, people prospectively joining our community, that this is a place where wayfinding is important, access and transparency is important,” said Mary Pat McMahon, vice president of Student Affairs, who was involved in discussions about the importance of the project. “To me, it’s a very big change."