As one of hundreds of remote workers at Duke’s Patient Revenue Management Organization, Donetta Gaskin’s days are often filled with Zoom meetings.

But one of those meetings in October ended up being memorable. Leaders in Patient Revenue Management Organization (PRMO) surprised her with news that she was a winner of the Impact Awards, PRMO’s new employee recognition program. 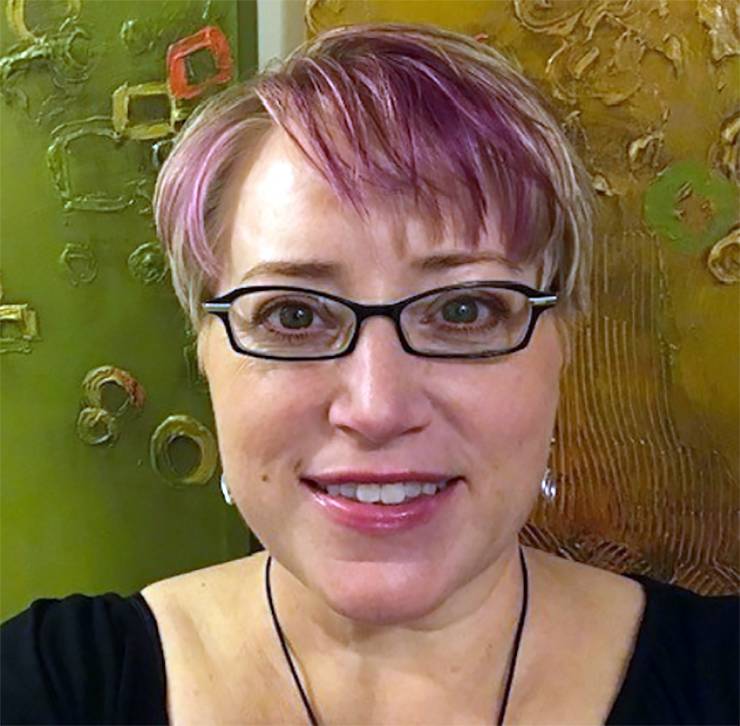 “It was so cool, it was one of those surreal moments,” said Gaskin, supervisor of Central Financial Services. “These awards just gave us a little extra oomph to get through a challenging time. It just validated what we do.”

While the pandemic changed the way many individuals and teams at Duke work, the need to recognize employees and teams for doing a job well done remains. That’s why, units across Duke, such as PRMO, have found creative ways to celebrate employees as traditional awards ceremonies or face-to-face presentations are not an option.

According to a McKinsey & Company survey about the work climate during the pandemic, 55 percent of employees say they feel improved engagement when they receive non-financial recognition for work.

“If something has been an ongoing part of your team’s work culture, maintaining it in some way in a virtual environment, even if it looks and feels a little different, has a lot of value,” said Dave Smithwick, Duke’s assistant vice president for Rewards and Recognition, a unit in Duke Human Resources.

At Duke Health Technology Solutions, employee recognition comes in the form shout-outs from department leadership during the weekly virtual town hall meetings which are attended by around 500 employees.

During each meeting, leaders mention teams or individuals who have done exceptional work during the pandemic.

“It really highlights the breadth of work, and the quality of work that everybody is doing,” said Sean Williams, DHTS communications manager. “Our leadership strongly believes that recognition should be a habit. This is kind of the mantra we’ve been living by and it’s served everybody well.”

At PRMO, the Impact Awards are a central piece of the employee recognition push.

Developed prior to the pandemic, the awards were meant to be given out at an in-person ceremony in the spring of 2020. But after the arrival of COVID-19, those plans were put on hold.

Eventually, PRMO leaders settled on making an awards video featuring conversations with the winners. The video was shown in a series of webinars where PRMO teams could watch together virtually and connect via chat. 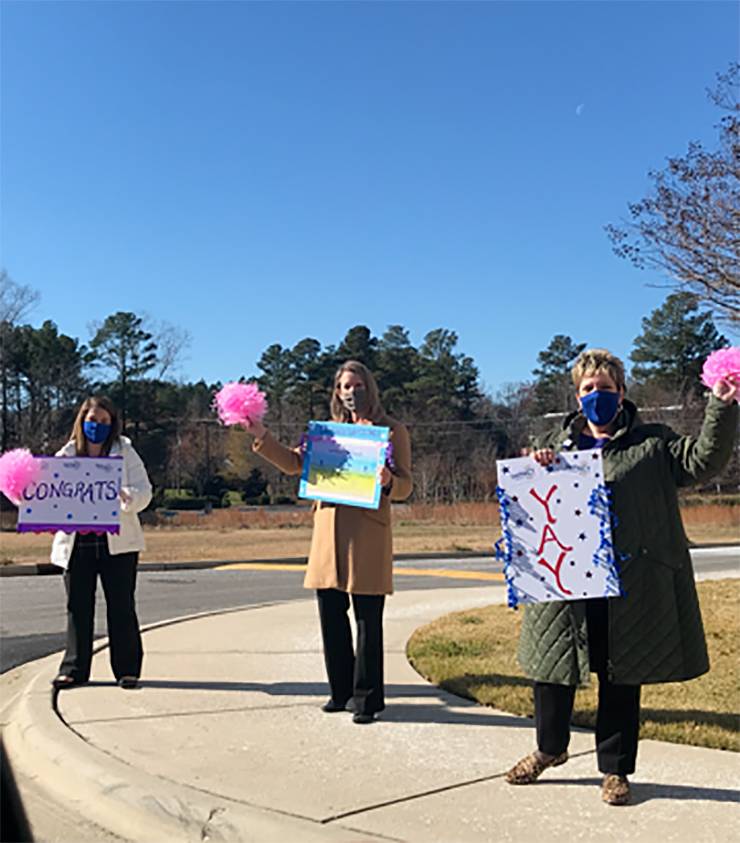 And in December, there was a drive-up awards distribution celebration which took place outside of PRMO headquarters.

“We just wanted to bring people together as best we could and celebrate their incredible accomplishments,” said Rebecca Rosenbaum, senior communications specialist with PRMO and one of the organizers of the Impact Awards. “We realized we had an opportunity to build community and achieve some of the things we were aiming for.”

Gaskin, who has been at PRMO for 15 years, said the Impact Awards provided both an uplifting chapter to a challenging year and a reminder of how PRMO values its staff.

“It’s important to our senior leaders to recognize individuals,” said Gaskin, who was nominated by the members of her nine-person team. “We all know that because we hear it and we see it in action. I think this was just another example of our senior leadership group showing how invested they are as employees and the PRMO family.”

At Duke Facilities Management (FMD), Employee of the Year awards are traditionally given at an all-staff banquet at the Washington Duke Inn & Golf Club. With that option unavailable, Duke Vice President for Facilities John Noonan decided that the awards needed to continue, and the way they were handed out needed to be reimagined.

“It’s as important as ever – if not more important – that we recognize staff this year,” Noonan said. “So we had to find a way to do it. And eventually we thought, ‘We can give these awards to staff and while complying with all the COVID-related policies.’ So, we made a plan, masked up, kept our distance and had some fun.” 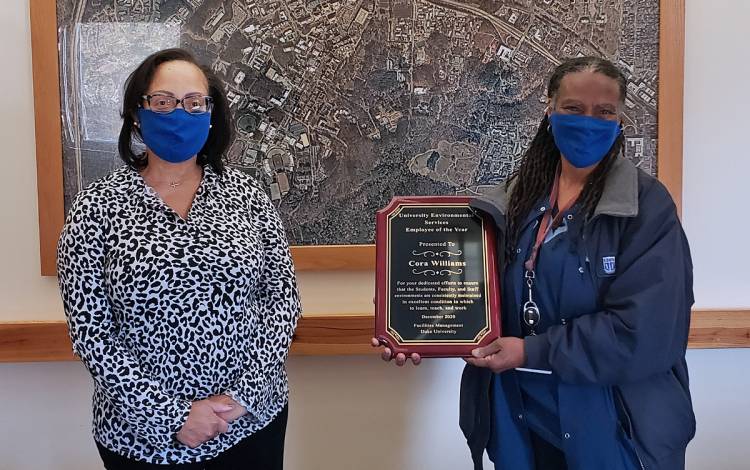 That’s how, on a Friday in early December, Housekeeping Specialist Cora Williams was invited to what she thought was a meeting at Smith Warehouse only to be greeted by Noonan and a small group of Duke Facilities leaders. They presented Williams with an Employee of the Year plaque for University Environmental Services and a gift card in a brief, in-person but physically distant masked gathering.

Williams, who has worked at Duke for 39 years, was singled out for her ability to adapt to new cleaning protocols while serving East Campus and the Bivins Building.

“I couldn’t believe it, this was the last thing on my mind,” said Williams, who has been at Duke for 39 years. “Everybody deserves it right now because everybody has been working hard, maintaining cleanliness and trying to keep everybody safe. I’m very grateful that they chose me.”

In all, seven FMD employees and one team were presented with Employee of the Year awards in separate, small, physically distant presentations, adding a happy highlight to a challenging year.

“It was a blast because, every single person was bowled over,” Noonan said. “It was a lot of fun to witness.”

From organizing folders to using data storage options, learn how to keep your files straight