Like many people during the COVID-19 crisis, Dean Mohamed Noor spends part of every day in virtual meetings.

But he makes his Zoom calls a little better by taking them from the bridge of the Starship Enterprise.

Noor is a biology professor and dean of natural sciences at Duke and winner of the Linnean Society’s 2008 Darwin-Wallace Medal. He’s also a hard-core Trekkie. A few years ago, looking to revamp some of his courses, Noor started using science fiction to teach real-world science.

If you want to know what human-Vulcan hybrids can teach us about evolution, or why aliens with slug-shaped symbionts aren’t as bizarre as they sound, Noor is your man.

He’s written a book on the subject, offers "Star Trek"-inspired biology lessons on his YouTube channel, and gives talks at universities, fan conventions and on cruise ships.

And now, he’s even joined CBS's "Star Trek" team as a science consultant. Noor spoke via email with Duke Today about his new role:

Q: What does a "Star Trek" science consultant do?

A: A science consultant can help in many different parts of the writing process. They might help with a general story arc involving a "sciencey" series of events, or with the plot of a particular episode, or even with just a few lines of dialogue in a particular scene.

I can't give spoilers, but hypothetically let’s say the writers are brainstorming how an alien species could become invisible to the human eye on demand. The science consultant would write a page or so explaining how this might happen and include sample dialogue. Importantly, the dialogue will be acted by non-scientists who are not looking at scripts, so short, simple language is very important -- no science essays!

In the end, story comes above perfect scientific accuracy, so sometimes the answer is to make something come "as close as possible" but that wouldn't actually work with the science we know right now. Or to invoke an unknown phenomenon, force or material to help fill the gaps.

Nothing I’ve worked on has aired yet, so I don't know that they use what I give them. But what's great is that many science fiction shows want to make their plots scientifically reasonable. They could start by inventing a term and just running with it in a comic-book-like manner. (No offense to comic books.) Instead, they talk with scientists to make sure both their facts and dialogue are accurate and to get advice about what they might say and do. They don't have to do this, and it's great that they do.

Q: How does one break into this business? For you it all came down to networking?

A: The National Academy of Sciences hosts the Science and Entertainment Exchange, and scientists who sign up can potentially be connected with writers working on projects. I did get connected with one project outside the "Star Trek" universe through them.

But what actually worked the best to get me in was a Duke alum and "Star Trek" actress named Jayne Brook. I met her at Dragon Con. She was signing autographs and speaking on actor panels. And she came to a talk that I gave with Dr. Erin Macdonald on science in the series "Star Trek: Discovery." At the very end, she came up to me said, ‘Hey, I went to Duke.’ That’s how we first started corresponding. I gave her a copy of my book and she read it very thoroughly. She even came and spoke to my class on campus, as well as to several classes in Theater Studies. I mentioned my interest in consulting, and she said, ‘I'm good friends with one of the writers. Let me talk to her.’ So the Duke connection did this. I don't know that it would have happened if it wasn't for her.

Q: Can you make a living doing this, or is it mostly a side gig?

A: I do this "on contract", not regularly -- so it's just been a few times. But it's SUPER fun each time!

Q: During spring break in early March, you found yourself aboard a "Star Trek" cruise as one of their invited guests. What was that like?

A: The "Star Trek" cruise is like a science fiction convention on the water. On one hand, it is like any other cruise -- lots of food, a big pool on the top, a casino, shops, stops and excursions at Caribbean destinations, etc. On the other, there are Trek-themed convention-like activities all the time -- Q&As or other panels/activities with actors, behind the scenes on makeup or art or writing associated with "Star Trek," trivia contests, themed parties, and of course, science talks. The science talks have a Trek slant but they are at their heart truly educational talks. One of mine, for example, was on personal genotyping. I had examples from "Star Trek," but the talk was about genetics, genomics, and scientific/ethical issues with direct-to-consumer genotyping services. Another talk of mine was largely on the evidence for evolution (using both real Earth examples as well as Trek aliens) and explanations of evolutionary processes. These are not "learn the science of Trek" talks -- they are "learn real science using Trek" talks. 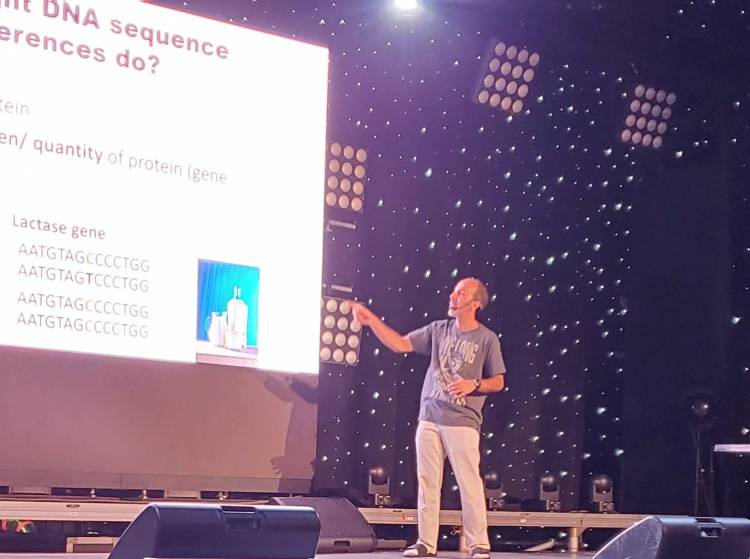 Q: Tell us about an experience you had onboard:

A: The highlight for me was having 8:30 a.m. "office hours" for cruise-goers. Very few students come to my office hours on campus. But on the cruise, I’d show up 30 minutes early and find multiple people already waiting to talk science and ask science questions.

I was generally surprised at how many people knew who the scientists were and not just the actors -- I defaulted to saying hello to almost everyone I'd pass in the hall, and probably 75% of the time, people would reply "Hello Professor." This was a ship with some 3,000 "Star Trek" fans who surely didn't sign up for the cruise to see me!

Q: Within days of your getting back from the cruise, Duke canceled in-person classes. What’s it like to be on a cruise ship, surrounded by Trek fans, while the rest of North America braces for its first outbreak?

A: Things weren't so bad right when we left, but we were aware that there was an outbreak brewing. From the very beginning, hand-shakes were discouraged (to be replaced by elbow-bumps or Vulcan hand-salutes). There was a fun fellow who stood outside the buffet dining hall who'd squirt a HUGE dollop of hand sanitizer on everyone's hands as they walked in and yell amusing things like "You have the power!"

Q: How has "Star Trek" changed your teaching?

A: Some colleagues ask, ‘Why don't you teach real science?’ And I’m like, ‘I am teaching real science.’ I was nervous with "Star Trek" as a subject for college students in particular, because there's not a lot of 18- to 19-year-old "Star Trek" fans. The fan base on average is much older. So I was nervous when we first launched our “Genetics, Evolution and Star Trek” class at Duke. Is anybody going to sign up? Half the people in the class had not watched any "Star Trek". But I think they were in because they liked the idea of having a good story associated with learning. If the students are having fun, they learn more, and it makes it more fun for me.

Q: Favorite episodes to watch (again) while you stay at home, or to recommend to others as we wait out the pandemic?

A: I'm guessing people don't really want more pandemic-related episodes right now when we're living through one. Nothing too political either. Something more upbeat or pretty is good. In that light, I'd recommend The Next Generation episode "The Inner Light" (Season 5, episode 25).