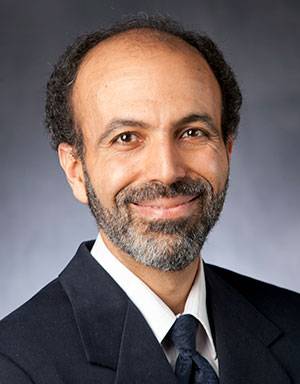 Mohamed A. F. Noor, professor of biology, has been appointed dean of the natural sciences within Trinity College of Arts and Sciences, effective July 1, 2019.

“Mohamed is a notable scholar, award winning teacher, and esteemed department and university citizen who brings a wealth of knowledge and experience to the role,” said Valerie Ashby, dean of Trinity College of Arts & Sciences. “We are fortunate to have his vision, energy, and commitment in Trinity during this critical time for advancing excellence in the sciences at Duke.”

Noor will succeed Dan Kiehart, who has served two terms in the position.

“My initial duty in the new role will be to hear all the priorities of our natural sciences departments to learn how to best help them meet their goals,” Noor said. “I'm especially keen on initiatives that aim to improve the experiences of and training for our graduate student population and to promote greater interaction among research groups.”

Noor joined the Department of Biology in 2005 and served as chair from 2013-17. His research focuses on learning to understand what genetic changes contribute to the formation of new species, and how the process of genetic recombination affects both species formation and molecular evolution.

He is a recipient of the Darwin-Wallace Medal — given by the Linnean Society of London in recognition of those who have made major advances in evolutionary biology — as well as several Duke teaching and mentoring awards: the Outstanding Postdoc Mentor Award, the Alumni Distinguished Undergraduate Teaching Award, the David and Janet Vaughan Brooks Teaching Award, Bass Society of Fellows’ Earl D. McLean Professorship, the Graduate School’s Dean’s Award for Excellence in Mentoring, and the Gordon G. Hammes Faculty Teaching Award from the Duke University Medical Center.

Noor has also served in key roles for a number of society offices, including president of the American Genetic Association, president of the Society for the Study of Evolution, and member of the board of directors for the Genetics Society of America. He has also held editorships and editorial board positions for publications such as American Naturalist, Evolution, Genetics, andPLoS Biology.

He has published two books, including the recently-released “Live Long and Evolve: What Star Trek Can Teach Us about Evolution, Genetics, and Life on Other Worlds,” an entertaining introduction to genetics and evolutionary concepts (paralleling the scientific content of his Duke and Coursera classes) through the lens of the popular science-fiction television show.

Noor holds a bachelor of science degree from the College of William and Mary, and a Ph.D. from the University of Chicago.