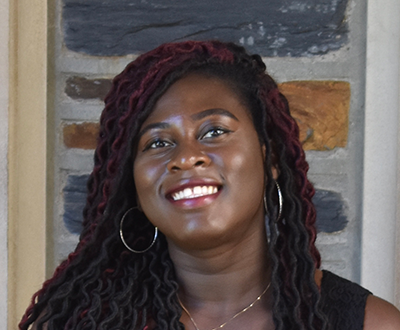 When senior Bruny Kenou delivered a TEDx talk this year, she was poised, concise and even funny on a topic that isn’t very humorous:  Why young people do not seek mental health assistance.

The talk was also very personal. In it, Kenou revealed she was diagnosed with major depression at Duke and how her efforts to establish a peer coach program might break down barriers to assistance.

The native of Togo explained she had to face the fear of stigma before she could seek treatment – even though it turned out to be one of the best things she’s ever done. Coming from a culture that didn’t believe in mental disorders and disparaged people who had them, Kenou spent much of her high school and early college years afraid of seeking help. She struggled under her own silence.

“Fear can often be the very thing that prevents us from doing the thing that can help us the most,” Kenou said.

At Duke, Kenou developed a personal and academic passion for improving mental health access. After graduation, she will turn it into her profession.

She is graduating with honors in neuroscience and picked up minors in chemistry and psychology along the way. Kenou spent three years as a research assistant for both Edward Levin, chief of the Neurobehavioral Research Lab in psychiatry, and Nancy Zucker, an associate professor of psychiatry and behavioral science, who directs the research laboratory of the Duke Center for Eating Disorders.

This fall, Kenou heads to a two-year research fellowship with the National Institutes of Mental Health in Bethesda, MD. She then plans to attend medical school and become a psychiatrist and researcher.

Kenou credits the relationships she has built with professors as key to developing her strengths.

“Truly, if I could give any advice to a Duke student, it would be to get to know your professors,” Kenou said. “They are not only eager to get to know you, but also come with wisdom in many areas of life, not just academia…During some of my lowest times at Duke, faculty helped me get through.”

Bruny Kenou ’20 on what it means to be the first in her family to graduate from college:

“It means so much. My mom has worked so hard as a single mother. She was able to start her own hair braiding business but she always told me that she never wanted me to end up braiding for the rest of my life. She used to tell me that if she had been born in this country, which had a lot more opportunities than her home country of Togo, she would have pursued science herself.

“That is part of the reason I work so hard -- I work so that I am ready for the opportunities that my mother never had and so I don't waste any of the sacrifices that she had to make for me and my brothers. My mother taught me how to be resilient in the face of adversity; resourceful even when there seem to be no resources; and how to stand, unapologetically, for what I believe is right. My graduating from college is important to my family, not only because it makes family proud but also gives my younger brothers the confidence to pursue their own paths and be successful.”

Finding such adult support and resources pre-Duke had not been so easy for the “nerdy” girl who always asked questions.

Kenou came to the U.S. at the age of three and was raised with her two younger brothers – one who has autism – by their single mom in New Jersey.  She started working in her mother’s hair braiding salon at the age of eight and did not have legal residency until she was a junior at Duke.

In high school, petrified of being rejected from colleges, she applied to 40 schools, thanks to help from the national Questbridge program for talented, low-income students.

“I didn’t have the money and I knew that only 10 percent of undocumented students get to college,” said Kenou, who is a recipient of Duke’s David M. Rubenstein merit scholarship for first-generation, low-income students. “I knew college was my only way out.”

Once at Duke, Kenou quickly discovered her major. She took a neuroscience course from Trinity Dean Minna Ng, who like Kenou was also the first in her family to graduate from college.

“She was amazing,” said Kenou, who asked Ng to be her adviser before the year ended. “I learned to be more confident in the classroom, to raise my hand and speak up in class – and that sometimes I’d be wrong, but that was still ok, too.”

For her part, Ng said she is proud of Kenou's bravery, strength, conviction and curiosity.

“Bruny was unable to go study abroad or participate in DukeEngage because of her residence status,” Ng said. “She felt defeated, but allowed me to push her. She applied for a summer internship to the National Alliance on Mental Illness in DC, got it and excelled.”

Kenou spent most of her time at Duke in classes and doing research, but still made time for another major component of good mental health – giving back to one’s community.

She joined the Zeta Phi Beta sorority and ultimately became president of Duke’s National Pan-Hellenic Council, the governing body for the university’s eight historically black fraternities and sororities. She used her position to help restore the historically black living and learning house, The Mitchell-White House on West Campus, after the black cultural living community disappeared when Central Campus was demolished.

Zucker, who was her thesis adviser, described Kenou as a “force of nature” with “tremendous leadership capacity, authenticity and unparalleled ability to engage and pursue her interests.”

“I’m tempted to get her autograph now,” Zucker wrote. “I asked Bruny to represent our Bass Connections team at the TEDx series. She won first prize for Virtual Avatar Coaches.”

“If you watch it, you will see what I mean,” Zucker added. “Bruny is an inspiration.”