Over sounds of family members and pets rummaging in the background, staff and faculty with the DeWitt Wallace Center for Media & Democracy update each other over live video on how they’re feeling and doing.

They talked about the Netflix show “Tiger King,” biking the Al Buehler Trail and taking care of children at home during a public health crisis.

Bill Adair, Knight Professor of the Practice of Journalism and Public Policy and director of the DeWitt Wallace Center, organized the weekly virtual hangout for casual conversation.

“One of the unexpected discoveries of this time has been how much our soul is nourished by human contact,” Adair said. “As a manager, I want to create ways for people to still get that. It’s important for me to create a time where we can laugh and share how we’re doing.”

One main way to support yourself during the pandemic is connecting and talking with others about your concerns and feelings, said Beth-Anne Blue, assistant director for Duke Personal Assistance Service.

She points to a psychology theory called “Maslow’s Hierarchy of Needs,” which was developed in 1943 by psychologist Abraham Maslow who establishes that humans need social connections and belongingness to achieve self-fulfillment.

“Call and video chat with your friends, colleagues and family,” Blue said. “Having a sense of connection and togetherness is essential for improving your mental health and reducing anxiety.”

See how some schools, departments and units are connecting outside of work discussions. 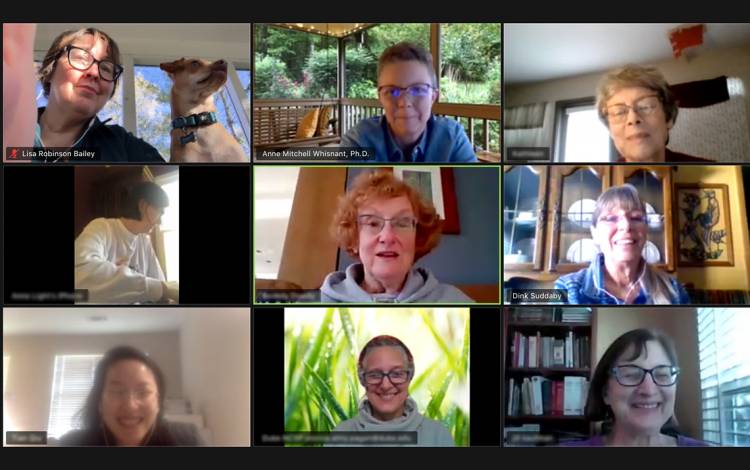 One of the first things Anne Mitchell Whisnant noticed after joining the Graduate Liberal Studies (GLS) program last August was the serene porches at the program’s house along Campus Drive.

She loved the spaces so much that she organized a gathering for students, faculty and staff to join her on the porch every Monday for casual conversation. The spaces served as a perfect way for Whisnant to meet and connect with the community.

“It gave me the chance to have unscripted conversations and just get to know people,” Whisnant said.

With campus access restricted, Whisnant now invites the GLS community to join her for “Virtual Porch Sitting.” The first gathering was March 26 when 11 students, staff,  faculty and even now-distant alumni joined the Zoom video call from home with Whisnant displaying a virtual background of her porch. Others sat on their porches or brought pets. A second gathering on April 2 was equally well attended.

The group shared online resources for musical and cultural events, like the United Kingdom’s National Theatre performances, and discussed how to engage and support international students who recently arrived at Duke.

“It was a larger group than ever joined me in person for my porch sitting time,” Whisnant said. “People miss talking to each other.” 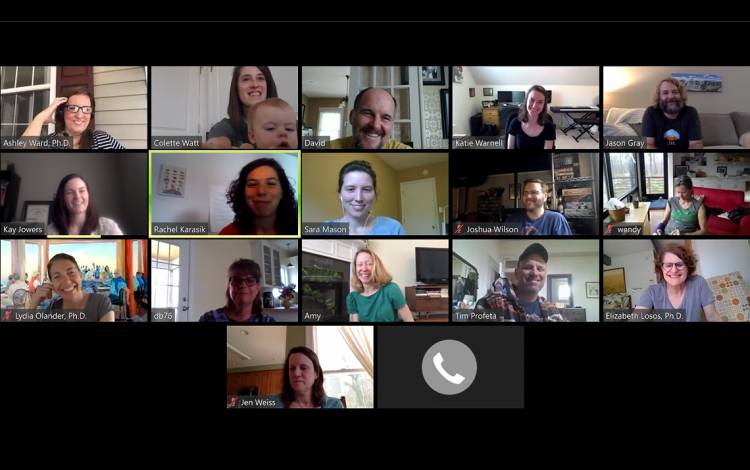 Colette Watt’s 1-year-old son Elliott was behind some technical difficulties during a recent hangout for the Nicholas Institute for Environmental Policy Solutions.

As Watt introduced her son to colleagues over the Zoom video call, Elliott began playing with her keyboard.

“He almost canceled the call by hitting random keys,” said Watt, administrative program coordinator. “Everything else went much smoother.”

The Nicholas Institute employees replaced their usual in-person socials at the office for a gathering over video. They exchange recipes, workout video suggestions and introduce family and pets.

After the gathering, staff put the recommendations in a Google document for easy access.

“You feel this solidarity that we’re all trying to figure this out together,” she said. “I miss running into people in the hallway and at the coffee maker. Our Friday call is a way to keep our relationship going without that.”

The First Rule Is … 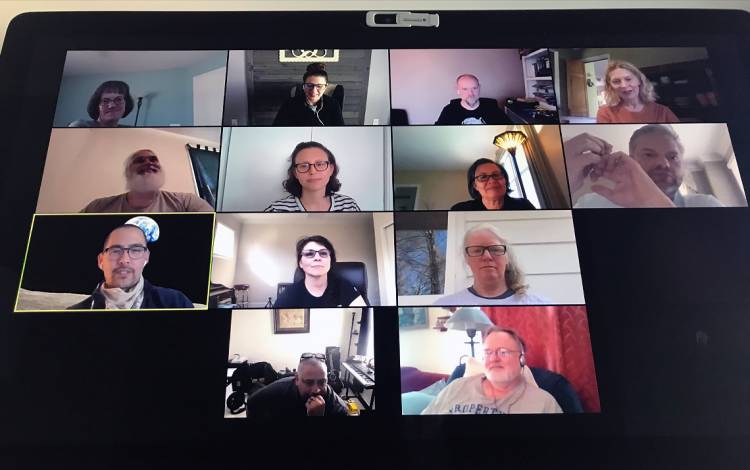 The rule of the Social Science Research Institute’s (SSRI) Friday afternoon social call is you can’t talk about work.

Since started to work remotely in mid-March, SSRI employees have decompressed at the end of the week with a half-hour call with 25 people.

Courtney Packard Orning, director of communications, loves the camaraderie of the big group. After working at SSRI for 15 years, the calls feel like a family reunion.

“With there being so much concern about the future, it’s nice to have something to look forward to every week,” Orning said. “I can’t stop smiling when I see everyone’s faces on Friday. It gives me positive energy heading into the weekend.” 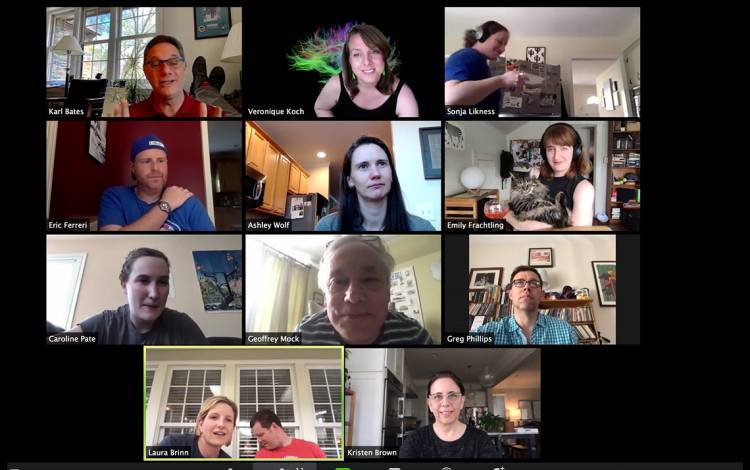 Though the format has changed, the spirit of University Communications’ Friday afternoon social hour remains the same.

The weekly hangout is called “Windy Acres,” a pun that host Karl Leif Bates based on the TV show “Green Acres” and named for his noisy office. People hop on a Zoom call and congregate over snacks and talk about weekend plans.

A topic during a recent gathering was fun virtual video backgrounds, including one of senior science producer Veronique Koch’s brain.

“We’ve been Zooming together all week, but this time there was no agenda and people’s voices were in a different register,” said Bates, director of research communications. “It was refreshing to see so many people smiling.”

Help us share the proactive and extensive work being done by all Duke community members. Please share ideas, shout-outs and photographs with us here or write us at working@duke.edu.

Duke Chapel ceremony honors the contributions of veterans at Duke