On a recent Friday morning, the pace on Bryan Center Plaza, a well-traveled hub of campus life, was nearly outpaced by action in loading docks tucked below.

Workers carried brightly colored bottles from a red Coca-Cola truck to vending machines throughout the surrounding buildings. Tightly packed carts filled with chairs and table linens were rolled out of one truck and white-coated kitchen staff lugged boxes of vegetables from another truck into the belly of the Brodhead Center. 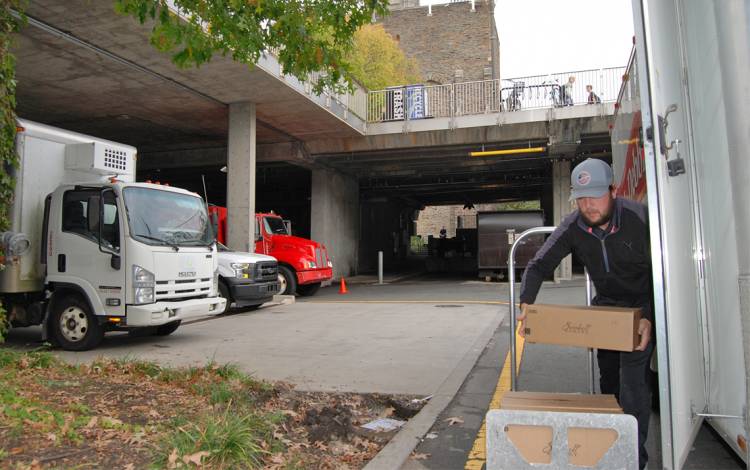 A few steps away, Clay Watkins stacked boxes of Little Debbie destined for the Lobby Shop on a hand truck. His small trailer, pulled by a pick-up truck, was parked on the side of Union Drive.

“I know there are a lot of big trucks that need to get through,” said Watkins, an employee at C.C. Isaacs Distribution. “I try to stay out of the way.”

Each day at the loading docks under the Bryan Center Plaza, a carefully orchestrated parade of pick-ups and deliveries moves food, goods, mail and other materials to and from the heart of campus. To keep the flow moving smoothly, several groups lean on a spirit of collaboration.

“It is a true dance,” said Jim Hodges, director of Conference and Event Services, which oversees action in the Bryan Center, Penn Pavilion and the Brodhead Center. “We work collaboratively and think about each other’s needs.”

The loading docks at the end of Union Drive serve eateries in the Brodhead Center and Bryan Center. They’re also used by Duke University Stores and Campus Mail Services. If supplies are needed for events at Penn Pavilion, Page Auditorium or spaces in the Bryan Center, they pass through the docks as well.

On Mondays, Wednesdays and Fridays, usually the busiest days, the loading docks can see around 57 deliveries. On other days, the flow dips to around 37.

One reason for the complexity of operating in the space under the Bryan Center Plaza is its size and location. There are four bays on the two cramped docks located beneath the plaza. While as many as four small trucks can use the space at a single time, larger trucks that deliver food can take up multiple spots.

The area has been a loading zone since the Bryan Center opened in 1982 when most food needs could be met with a single delivery for the single food vendor in the West Union, which predated the Brodhead Center. But after the opening of the Brodhead Center in 2016, managing loading dock traffic grew more detailed.

When the Brodhead Center – which serves around 8,000-10,000 meals per day – came online, and 14 individual dining spots opened up, each with their own needs, deliveries increased. 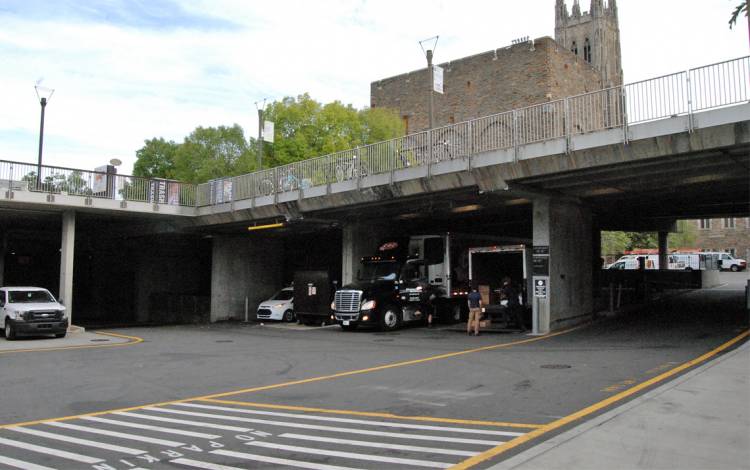 In preparation, Marton reached out to the many entities using the space. By gauging everyone’s needs, she created a detailed schedule for the loading docks, allotting certain times for deliveries and giving structure to the constant flow.

Ever since, she’s managed a color-coded spreadsheet that, with input from several stakeholders, provides a constantly-updated schedule for space.

“I tried to make it as simple as I could,” Marton said.

The result of that planning process is the daily churn of food, merchandise and supplies coming in, and trash, recyclables and mail going out, continues without slowing down campus life.

“We’re taking the space that we have and making it work,” Hodges said.