With a return to the academic year and new electric scooter population in Durham, Duke is reminding community members to follow guidelines for operating scooters in a safe manner.

Currently, three operators – Bird, Spin and Lime – have permits from the city of Durham to deploy 200 electric scooters. A fourth company is anticipated to arrive by early in 2020.

On Duke’s campus, electric scooters can only be operated between 6 a.m. and 11 p.m. daily. To ease congestion and make sidewalks safer, scooters must be walked through the East Campus Quad, Abele Quad, Bryan Center Plaza, Sarah P. Duke Gardens and the Duke Athletics precinct of campus, which includes the areas around Brooks Field at Wallace Wade Stadium, Koskinen Stadium and Cameron Indoor Stadium.

The Duke University Police Department and Parking & Transportation Services strongly recommend that operators wear a helmet and not drive a scooter while using a smartphone. 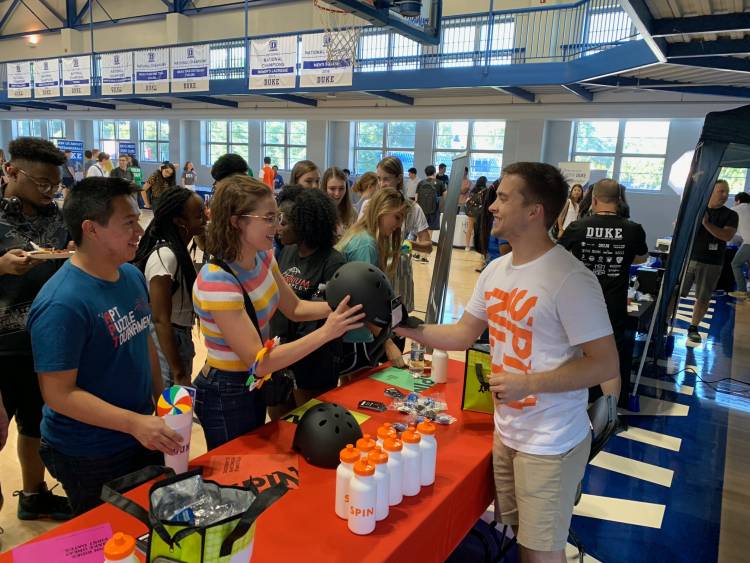 So far on campus, there have been two scooter accidents. Both individuals involved sustained minor injuries. In Durham, a person received life-threatening injuries in August after being hit by a car after crashing on an electric scooter.

The Associated Press reported in June that at least 11 electric scooter ride deaths have occurred in the U.S. since the beginning 2018. In April, the Austin, Texas Public Health Department and Centers for Disease Control and Prevention, calculated that 20 individuals are injured per 100,000 electric scooter trips.

Scooter riders must adhere to traffic control devices and rules of the road applicable to motor vehicles under North Carolina state laws as prescribed in the General Statutes of North Carolina. See a full list of safety tips and guidelines for Duke’s campus here.