Clouds of chalk billowed from Kyle Long’s hands as he clapped them together and gazed up at the indoor climbing wall in Wilson Recreation Center on West Campus.

“Which route am I taking today?” Long asked himself as he eyed the 35-foot tall wall.

Long, whose right foot was amputated when he was 13 after a cancer diagnosis, pushed off his lower body and grasped the wall’s climbing holds with his hands. As sweat dripped down his forehead, he balanced his weight and pushed upward with the strength of his arms and core. He reached the top in four minutes.

“I’m happy with that run,” said Long, an operating room nurse for Duke Children’s Hospital. “They do a good job of changing the routes here, so it’s a good place to train. It’s not going to make you any better if you climb the same routes.” 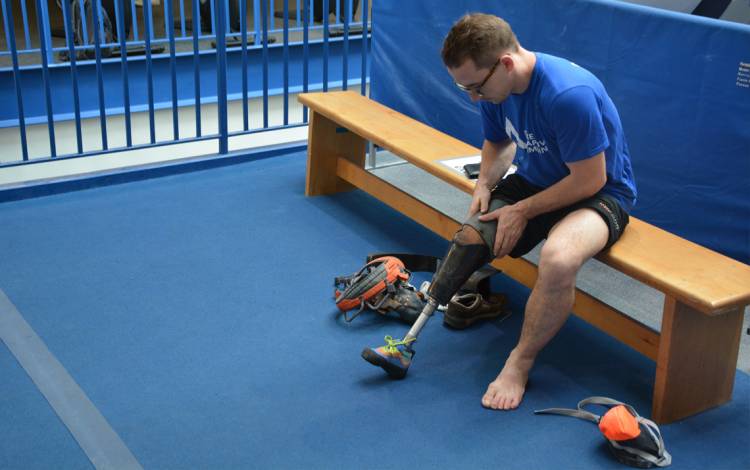 Long, 32, finished second in the lower extremity amputation division of the USA Climbing: Adaptive National Championship in March. He earned a spot at the International Federation of Sport Climbing’s Paraclimbing World Championship July 16-17 in Briançon, France.

Long grew up in Hillsborough and attended C.W. Stanford Middle School and Orange High School. He ran for his middle school’s track team in eighth grade and hiked around Eno River State Park. When Long was 13, he was diagnosed with bone cancer, and doctors amputated his right foot. Long resumed hiking and started wrestling by the time he reached high school a year later.

“I’m my best self when I’m active,” he said. “I was determined to keep moving even after the operation.”

He started indoor climbing three years ago when a friend took him to the Chapel Hill Community Center’s climbing wall to relieve stress. Long had the strength to climb after years of wrestling and fell in love with the challenge.

“There’s no other sport like it,” Long said. “At the end of the day, it’s just using your body and mind to figure out how to climb each route. It’s so simple yet so demanding. It challenges me to be in the best shape possible.”

Long climbs with a prosthetic foot and wears a climbing shoe over it. The foot has a high arch, allowing him to hook his shoe over ledges and holds. He cannot rely on leg strength the way others do to climb, so he focuses heavily on his core, arms and fingers to pull and swing himself up and along the wall.

Shortly after starting his position at Duke in 2017, Long began climbing at the Wilson Recreation Center on West Campus. He participates in Duke Adaptive Climbing, a monthly program Duke Recreation & Physical Education runs to provide climbing opportunities to individuals with physical disabilities.

“I admire his persistence with climbing and his constant pursuit to improve,” Hendricks said. “He relied on his upper body when he first started climbing. The more Kyle climbed, the more he found value in utilizing his whole body and focusing on good foot placements.” 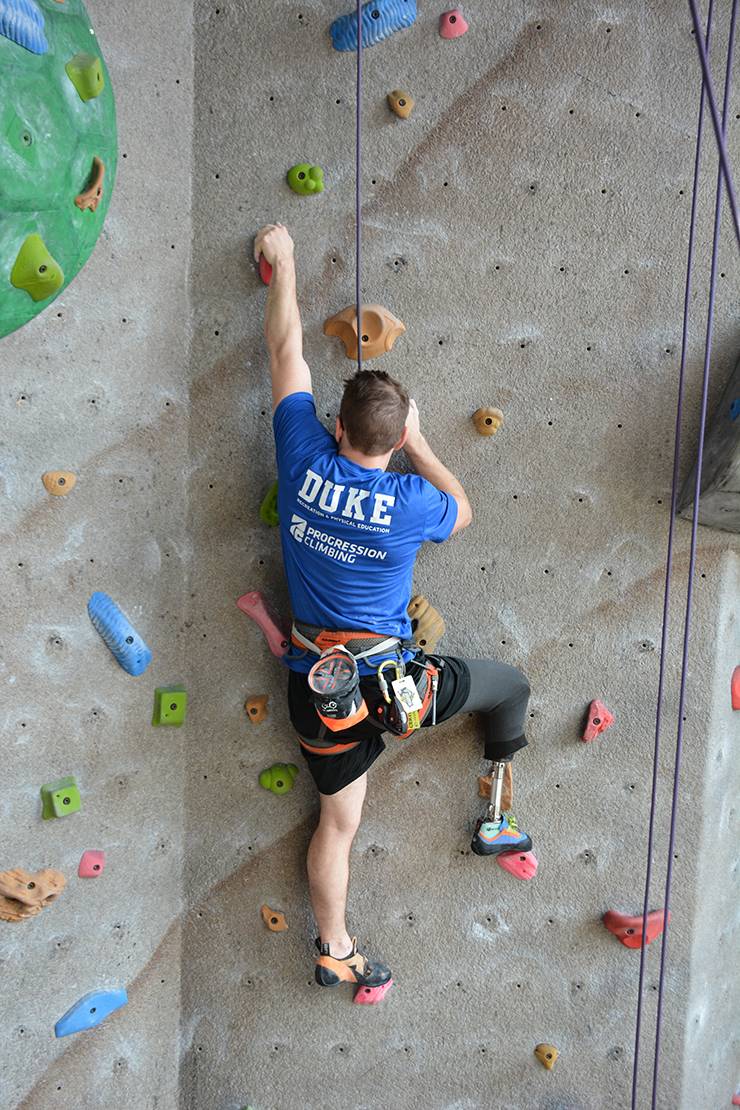 Long competed in the Adaptive National Championship for the first time last year. He finished fourth, just one spot away from qualifying for the world championship.

He created a tougher training regimen for the 2019 competition. He climbed every other day at Duke, Pilot Mountain and Progression Climbing in Chapel Hill, performed planks and sit-ups after each climb and stretched his fingers and toes daily.

The work paid off at Adaptive National Championship, where he finished second in the lower extremity amputee division. He’s maintained the training regimen for the World Championship July 16-17.

Long will be climbing on-sight style in the competition. With the on-sight format, he'll be kept in isolation and have no idea how the wall, route or holds look or how anyone else has climbed the course. If he places high enough during the preliminary rounds, Long will qualify for the finals on day two of the competition.

“Climbing is a great exercise, but it’s also therapy,” he said. “I forget about everything else and focus on the climb in front of me.”