The award recognizes one graduating senior and one member of the faculty, staff or graduate student body of Duke University or Duke University Health System for their outstanding commitment to service. The award was established in 1925 to honor the memory of Sullivan, a southerner who became a prominent lawyer, businessman and philanthropist in New York in the late nineteenth century.

The award aims to perpetuate the excellence of character and humanitarian service of Sullivan by recognizing and honoring such qualities in others.

Duke University Provost Sally Kornbluth presented the recipients with a framed certificate and medallion during a ceremony in the Allen Building Boardroom.

“I get choked up when I hear everybody’s story,” Kornbluth said. “The award recipients represent the characteristics and dedication needed to make a difference in our community. They are an inspiration.”

The award recipients are chosen by two Duke selection committees who review nominations and pass along their recommendations to the Office of the Provost. This year's winners are: 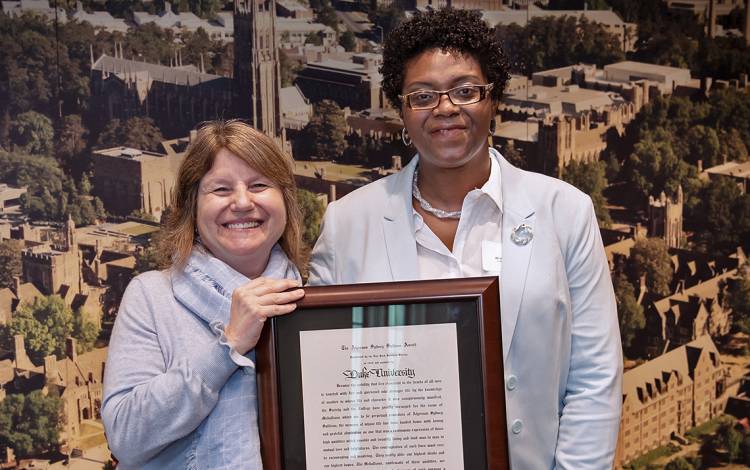 Niasha Fray was diagnosed with breast cancer since 2017, but the disease has not slowed her down in caring for people suffering from life-threatening illnesses. Fray’s selflessness inspired her colleagues to nominate her for the award.

“Every time I have known her to make a commitment to help others, I have seen her follow through in a way that surpasses the expectations of those she is serving,” wrote nominator Helene Vilme, medical instructor in the Duke Department of Population Health Sciences.

Fray works on health promotion, behavior change and counseling for at-risk populations affected by HIV/AIDS, substance abuse, post-traumatic stress and breast cancer. She also is a guest lecturer in the course, ”AIDS: Principles and Policy,” at the University of North Carolina Gillings School of Global Public Health. She is a member of Healthy Durham 20/20, an organization working to improve the health and quality of life for the Durham community.

"This award is for the people making sure our world, our community, our families and ourselves are healthy," Fray said. "I’m so lucky to serve a community I care for so much." 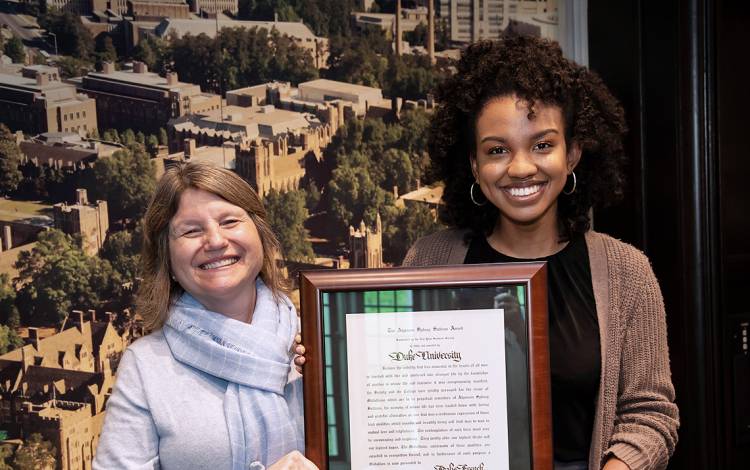 Idalis French, a senior with a major in psychology, was selected for her work mentoring young girls in the Durham community.

Since her first year on campus, French has devoted time and energy to The Girls’ Club, a mentorship organization at the Emily K Center for middle school girls attending Durham Public Schools. French has served as a mentor, vice president of recruitment and president for the organization. She leads weekly sessions about mental health, female empowerment and confidence.

“She shows a natural inclination toward selflessness, empathy and understanding with mentees and mentors alike,” wrote nominator Madeline Farber, a Duke clinical psychology Ph.D. student. “To see a woman of her age with such fervent passion for uplifting others is quite remarkable.”

French also volunteers with the Durham Nursing & Rehabilitation Center, where she keeps residents company in their rooms, plays bingo with them and facilitates arts and crafts.

"There are not enough words to express my gratitude," French said. "To know that I’m leaving Duke with the impact I intended to leave it with freshman year is so inspiring and such a great blessing." 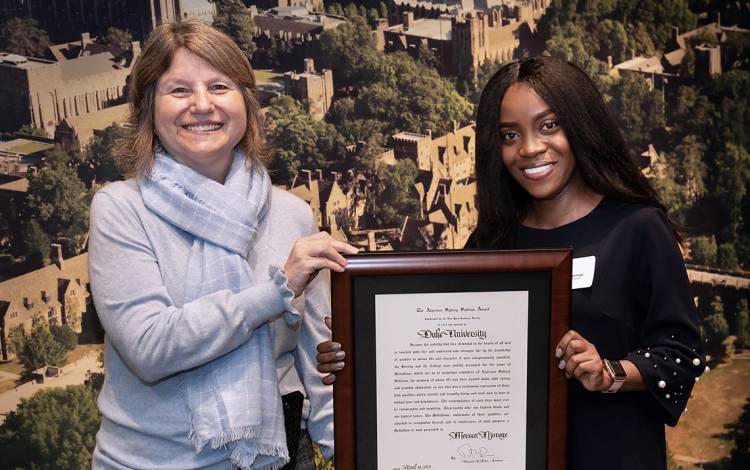 The Sullivan Award committee chose senior Moreen Njoroge for her work across disciplines and continents.

Njoroge is an evolutionary anthropology major with minors in chemistry and global health. She has studied in Spain, India and Kenya. In Kenya, Njoroge worked with village chiefs, community health workers and hospital administrators to analyze what causes women to not receive treatment for cervical cancer.

“Moreen is experienced, focused, determined and self-directed. She sets high standards for her work and constantly meets them," wrote nominator Colleen Scott, director of Duke’s Baldwin Scholars Program. “She is eager to have a better understanding of health needs in underserved regions and populations and will not be satisfied with simply possessing this knowledge.”

For the past two years, Njoroge has worked as an English and mathematics tutor for refugee students in the America Reads/America Counts program. She is also an Alice M. Baldwin Scholar, a program that supports undergraduate women at Duke to become engaged, confident and connected leaders to the community.

"This award may have my name on it, but it belongs to everybody who has been guiding me on this journey," Njoroge said. "I’m so grateful for the education I’ve received and the confidence I have gained at Duke."

The nominees for each Sullivan Award category include: