Duke University Libraries has received $10 million in support of the planned renovation and expansion of Lilly Library, one of Duke’s oldest and most architecturally significant buildings, President Vincent E. Price announced Thursday.

The donation to Duke is comprised of three gifts: a $5 million grant from Lilly Endowment Inc., $2.5 million from Irene and William McCutchen and the Ruth Lilly Philanthropic Foundation, and $2.5 million from Virginia and Peter Nicholas.

“Duke Libraries offers our community a wealth of information and resources to further educational growth and learning,” Price said. “We are so grateful for the generosity of the McCutchen and Nicholas families and Lilly Endowment, which will renew one of our most treasured campus buildings and enhance the experience of everyone who comes through its doors.”

Lilly Library is named for philanthropist Ruth Lilly, the last great-grandchild of pharmaceutical magnate Eli Lilly. Ruth Lilly made a gift to “renovate and computerize” the library where her two nieces, sisters Irene “Renie” Lilly McCutchen and Virginia “Ginny” Lilly Nicholas, spent time as they attended the Woman’s College at Duke, graduating in 1962 and 1964, respectively. The gift renamed the building and provided the first significant upgrade to the stately Georgian edifice since it was built in 1927.

Renie and William McCutchen, a 1962 graduate of Duke’s Pratt School of Engineering, have a history of giving to Duke, primarily toward the Duke Divinity School. Ginny and Peter Nicholas, a 1964 graduate of the Trinity College of Arts & Sciences, are also longtime donors to Duke, most notably for their naming gift for the Nicholas School of the Environment.

“These remarkably generous gifts from the Nicholas and McCutchen families and the grant from Lilly Endowment will enable us to dramatically improve the academic experience for Duke students and faculty, while preserving the charm and character of Lilly’s most beloved spaces,” said Deborah Jakubs, the Rita DiGiallonardo Holloway University Librarian and vice provost for library affairs.

The planned renovation and expansion will update facility needs — including enhanced lighting, technology infrastructure and furnishings — to meet today’s standards of safety, accessibility, usability and service. Anticipated changes will also extend to the elegant Thomas, Few and Carpenter reading rooms while maintaining the charm and character of these favorite spaces. 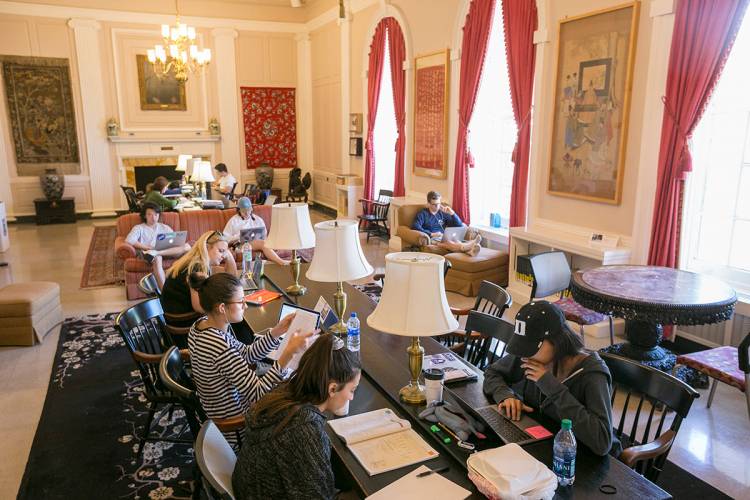 The proposed renovated building will also feature several new spaces for collaborative research and academic services, such as tutoring space for the Thompson Writing Program, event space for the Duke FOCUS Program, a student-testing facility and an exhibit gallery. An anticipated added entrance and commons space holds promise to become a crossroads environment to encourage informal interactions and allow students and faculty to gather.

“Our family’s commitment to restore and expand Duke’s library that bears the Lilly name comes from our hearts,” said Renie McCutchen and Ginny Nicholas. “We are happy to continue to support the same exceptional education and student experience as Duke has provided for three generations of the Lilly family.”

Lilly Library opened in 1927 as Duke University’s first library on East Campus while West Campus was being constructed. It had a collection of 4,000 books and was designed to serve a population of some 600 students. For more than four decades it served as the Woman’s College Library. When the Woman’s College merged with Trinity College of Arts & Sciences in 1972, the library was renamed the East Campus Library until 1993, when it was rededicated in honor of Ruth Lilly.

Today, more than 1,700 first-year Duke students make East Campus their home every year, and Lilly serves as their gateway to an abundance of information through the art, art history and philosophy collections housed there. Faculty and graduate students whose departments are on East Campus also depend on Lilly Library for library services and materials.

For more information about the proposed Lilly Library expansion and renovation, visit https://library.duke.edu/support/lilly-library-expansion-renovation.