About once a month, someone from the Duke University Wetland Center climbs in a metal rowboat and floats to the center of a reclamation pond on the far edge of West Campus.

Rowing to one spot, and then another, they lowered instruments that measured the water’s temperature, salinity, transparency and depth. In notebooks they scribbled readings about the amount of dissolved oxygen, dissolved solids and sediment.

After collecting samples and sealing them in plastic jugs, they rowed back ashore.

“It’s definitely nice to get out of the office, especially on sunny days” Flanagan said as walkers circled the dirt track that weaves around the pond’s 12-acre site. 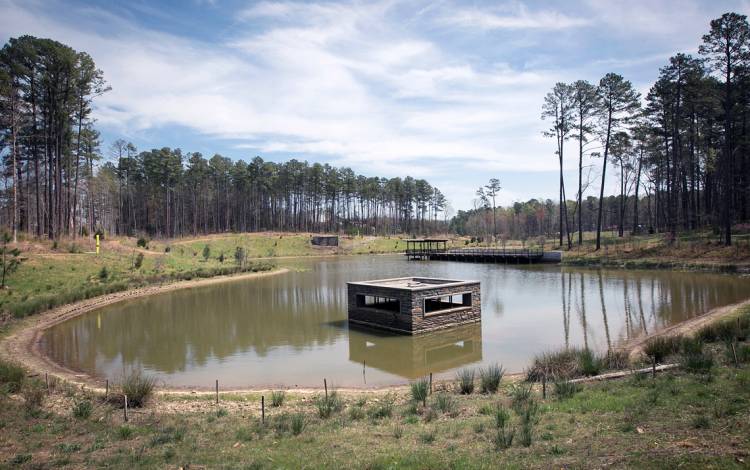 Completed in 2015, the reclamation pond, also known as Duke Pond, is a major piece of Duke’s drainage strategy for water that flows across campus, whether in streams or storm water. The pond drains 22 percent of campus and provides water for the nearby Chiller Plant No. 2, which pumps cold water around campus to cool buildings. The pond saves around 100 million gallons of potable water annually – and, on sunny days, it’s a prime spot for a stroll.

The pond is the most visible example of Duke’s thoughtful approach to water. But if you follow the journey of water on this corner of campus before, during and after it collects in the pond, you’ll see that it’s not the only example of how Duke is trying to conserve and improve water quality.

“It’s all connected,” said Mark Hough, university landscape architect. “Duke looking at storm water holistically, as a system, has made a huge difference. We can deal with it as a campus and be much smarter about it.”

Learn how, along its path, Duke’s storm water can be used for irrigation, treated sustainably, captured for buildings or studied by faculty and students. 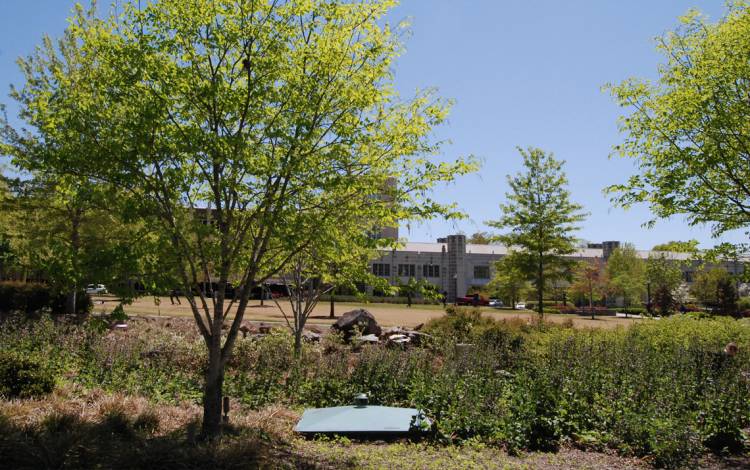 Underneath the circle are two cisterns that combine to hold roughly 100,000 gallons of runoff from the roofs of nearby buildings. The water in the cisterns irrigates the plants and grass in Duke Medicine Circle and a handful of other nearby landscaped areas.

There are several other places on campus where storm water runoff is captured and used for irrigation. Hough offered a tip on how to spot them.

“If you’re walking on campus and you see any part of an irrigation system that’s purple, it’s using reclaimed water,” Hough said. 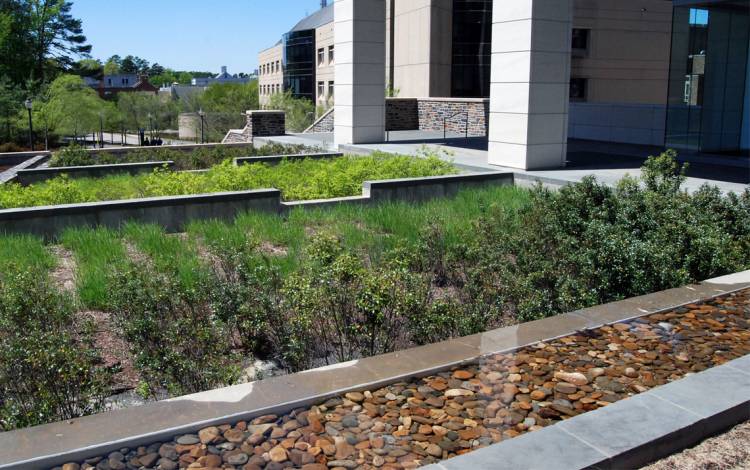 While the pond collects sediment and nutrients from runoff, thus keeping them from becoming problems downstream, it can’t be expected to do all the work. Upstream from the pond, Duke constructed a handful of bioretention areas to filter storm water with the help of different types of soil and plants.

One such setup can be found in front of the Mary Duke Biddle Trent Semans Center. Featuring water tumbling over pebbles and plants shooting up between cement ledges, what looks like a decorative water feature is a system that cleans runoff from the center’s massive roof and other nearby spots before draining into the pond.

“It holds the water like a filter and then the plants use the nutrients,” said Ryan Lavinder, a civil engineer with Duke Facilities Management Department. 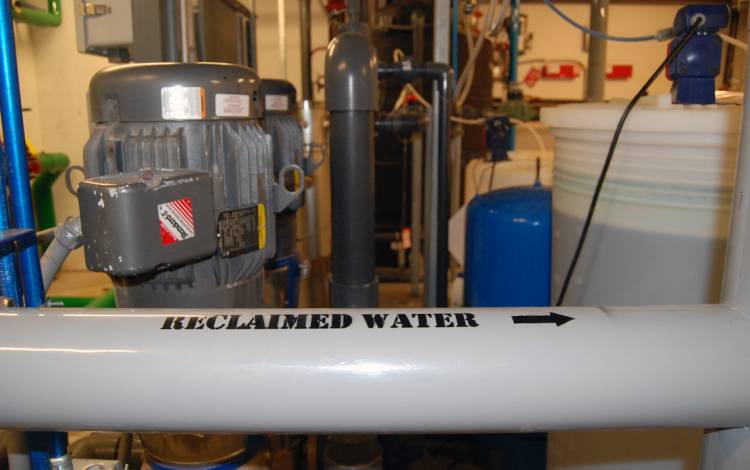 Behind a locked door on the lower level of Environment Hall, pumps stir to life every few minutes, sucking water from a black 500-gallon tank, through a pair of filters and into pipes that shoot up into the building above.

In a LEED Certified Platinum building, this tangle of pipes, pumps and tanks is every bit as big a sustainability selling point as the solar panels and rooftop garden.

The tank holds storm water collected from the rooftops of Environment Hall and the nearby Levine Science Research Center. The pipes lead to Environment Hall’s 43 toilets, which use the reclaimed water before it heads into Durham’s sewer system.

“This makes it one of our lowest water consumers among major buildings on campus,” said Duke Facilities Management Energy Manager Casey Collins. 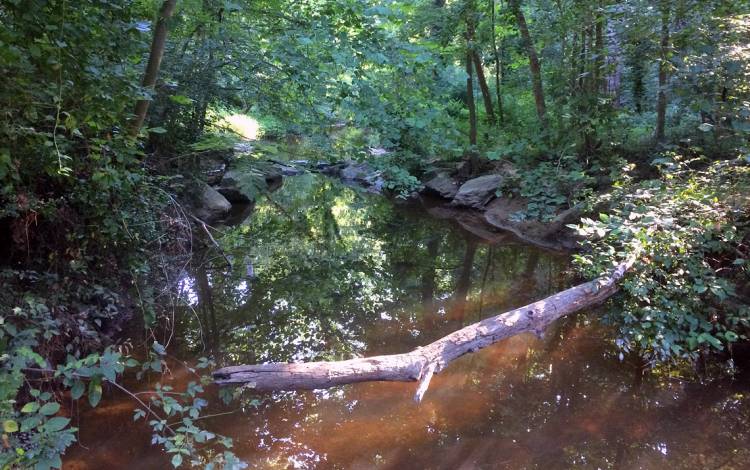 Since 2004, the Stream and Wetland Assessment Management Park (SWAMP), run by the Duke University Wetland Center, has given Duke students and faculty a chance to learn about stream restoration techniques while improving the condition of Sandy Creek and its tributaries that sweep across West Campus.

The SWAMP project, and others it has inspired, have helped Duke remove 500 tons of sediment, 64 percent of the nitrogen and nearly 40 percent of the phosphorus from the water it sends downstream.

Curtis Richardson, the John O. Blackburn Distinguished University Professor of Resource Ecology at the Nicholas School for the Environment and the director of the Duke University Wetland Center, started SWAMP after seeing the dire condition of Sandy Creek due to development.

Swollen by too much runoff, the creek’s quickened pace left it flowing through a deep groove and sending excessive sediment and nutrients downstream. Through work designed and implemented with the help of students, SWAMP restored wetlands and brought back the creek’s gentle sloping flood plain and natural meandering path.

“My idea was that universities should be model systems,” Richardson said. “We got the students involved, and I used my wetland restoration classes to design the solutions. It’s led to four Ph.Ds, 15 master’s projects and hundreds of students going out there and working.”

Duke’s reclamation pond flows into Sandy Creek, which, like the pond itself, is used as a vital source of data for Duke University Wetland Center research.

“You’ve got to have multiple approaches across the whole watershed,” Richardson said. “It’s a whole combination of things that have made Duke a model system for water.”