To understand NBC national political reporter Jonathan Allen, one need look no further than his two stints at POLITICO -- first as a contract hire in late 2009, and then as a full-time hire in 2010 after a nearly six-week excursion into political advocacy.

The POLITICO newsroom was split on whether to re-hire someone who didn’t seem to know what he wanted to do with his life. But as publisher and editor-in-chief John Harris wrote in his “Why POLITICO Let Jonathan Allen Come Back” column from February 2010, “The benefits of his reporting are worth the trouble -- and worth the criticism we’ll take from those who may say he has no business working at this publication.”

When you’re barely 30 and have bounced around three organizations in less than six months, and the boss still wants you, you must be very good at your job.  And yes, as Allen admits, sometimes a “pain in the ass,” too.

POLIS invited Allen to speak at Duke on April 20 to give students and other members of the community the opportunity to hear from someone who is one of the best in the business, who doesn’t hold back, and who would just as soon abandon the whole rat race at the top of his game . . . if he and his family had enough money to retire early.

Allen’s talk was cosponsored by the DeWitt Wallace Center for Media & Democracy and was moderated by DeWitt Wallace’s David Graham, who also serves as a staff writer for The Atlantic.  The talk was followed by a private lunch with six Duke students interested in political reporting careers.

At the outset, Allen shared what led him to a journalism career: “My father was a reporter.  I had no idea what I wanted to do with my life,” he said. “When I was 14, my father told me I should get a job. So I took a sports reporter position covering high school football games, which I would have gone to anyway. They didn’t care about my writing. They should have, but they didn’t. They were just hoping I’d get the score right.”

“Right off the bat, people told me I could never be a reporter,” he said. “Others looked out for me and gave me small assignments.”

Allen took on whatever he could get, volunteering on weekends and cranking out copy.  Within a few years he was appearing on national television shows like MSNBC’s “Hardball with Chris Matthews.”

In 2008 he won the Everett McKinley Dirksen Award for Distinguished Reporting of Congress, as well as the National Press Club Sandy Hume Memorial Award for Excellence in Political Journalism. In short order, Allen had become one of the most successful political journalists of his generation.

Then a series of circumstances and decisions nearly derailed his promising career.

Congressional Quarterly and rival news organization Roll Call merged, resulting in dozens of layoffs in 2012 -- including Allen. He landed a contract job at POLITICO, but eventually itched to get into the political game, and accepted a position with the PAC of Congresswoman Debbie Wasserman Schultz, D-Florida.

“She basically wanted me to plot her rise,” he said. Allen said he got along with her well, but after only 40 days he realized he wasn’t cut out for this line of work. “I’m contrarian. I’m a curmudgeon. Journalism is my calling.” He returned to POLITICO in 2010, now married with one child and a second on the way. 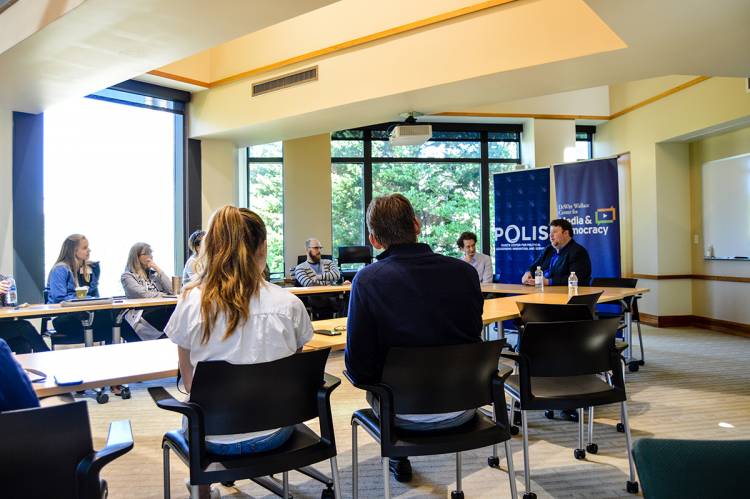 In 2012, Allen was paired with journalist Amie Parnes to co-write a book on Hillary Clinton in advance of her next run for president. The result, “HRC,” became a New York Times bestseller in 2014.

As it became clear Donald Trump would become the Republican Party nominee, most people viewed “Shattered” as the story of Clinton smashing the political glass ceiling. Even their editor a couple of weeks before Election Day warned that the manuscript highlighted too much turmoil in the Clinton camp.

But the authors stood firm. “This book wasn’t tilted toward an outcome,” Allen said.  “That’s what made it relevant after the election.”

It turned out to be more than “relevant.” “Shattered: Inside Hillary Clinton’s Doomed Campaign” netted Allen and Parnes their second consecutive New York Times bestseller and cemented the duo as a collaborative journalistic force.

Now an NBC News national political reporter after nearly 20 years in the business, Allen remains “excited to be paid to do journalism.”

Said@Duke: Liam Collins on Why Ukraine Matters to U.S.