Duke’s Research Drive Garage will be getting its power from the sun.

Construction begins this week on a solar panel system that will sit atop the seven-story parking garage, a good portion of the work has already been done.

The panels, which will sit on a canopy above the deck’s top level, will provide 1.3 million kilowatt hours of electricity annually. Not only will that easily cover the needs of the garage, thus putting excess energy back into the grid to power other buildings, it will also knock off 430 metric tons of carbon from Duke’s footprint. That’s equivalent to 92 passenger cars being taken off the road.

The LEED-certified deck, which holds around 1,900 cars, was built a decade ago with sustainability in mind. It uses efficient LED lights and captures rainwater and reuses it for irrigation.

Solar panels on the roof were part of the initial design, thanks in large part to the deck’s close proximity to a high-voltage substation. As the deck was coming together, Duke installed the infrastructure necessary to support solar power in the design, hopeful that one day it could be of use. The project is expected to take five months to complete. 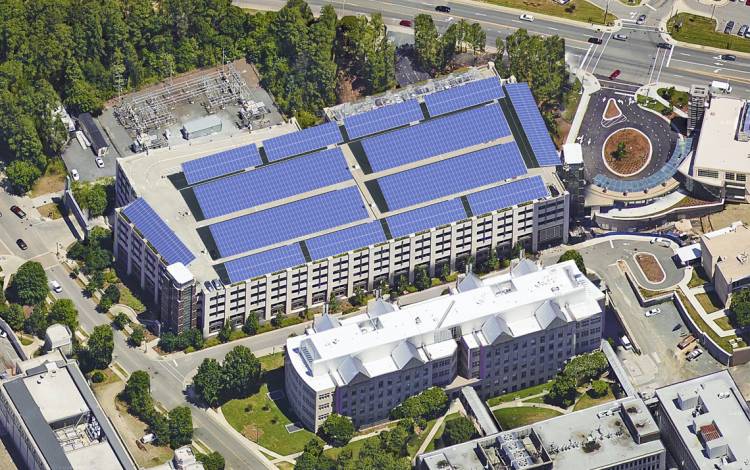 With solar power systems becoming more efficient and affordable, Duke revisited the plans last year and greenlit the $2.3-million project to add panels to the top of the garage.

The top level of the garage already has canopies on which panels can be attached. It also has concrete support columns strong enough to hold additional support structures.

“There’s no real structural reinforcement of the parking garage that has to go on,” said Tilden Hagan a Duke alum and CEO of Green State Power, the Greensboro-based company that will install and maintain the panels. “… A lot of projects wouldn’t happen if that had to be done. Luckily, none of that is the case here.”

While Duke has small solar arrays on campus already, the one on top of the Research Drive Garage, also known as Parking Garage No. 9, will be by far the largest, making the decade long wait to bring it to life well worth it.

“There was some forethought and planning,” Collins said. “It just took a little bit longer to execute.”