Of all the spaces in Duke’s new Rubenstein Arts Center, the one that Purnima Shah, director of the Duke Dance Program, is most excited about is known as the “glass box.”

On the second floor, a massive studio juts out of the building’s facade, three sides of it encased in glass. It allows dancers in the space to feel as though they’re surrounded by only trees and sky.

“In a dance studio or a theatre space, there’s always a consciousness of a wall,” said Shah, who’s been at Duke for 16 years. “That kind of bound space affects your movement. This openness allows for a feeling of infinity.”

Duke's Commitment to the Arts

The Rubenstein Arts Center is the latest step in an arts renaissance at Duke. See how "The Ruby" fits in.

For Shah and for everyone else involved in the Duke Dance Program, the removal of spatial boundaries is no small thing. For most of its history, the department’s offices and studio spaces have been scattered around east campus locations.

But when the Rubenstein Arts Center opened this year, the staff and faculty of the Dance Program were elated that their work finally had a home of its own.

Featuring four dance studios, two theater spaces and covering 70,000 square feet, the building – nicknamed “The Ruby” – was established with a $25 million gift from philanthropist and Duke graduate David M. Rubenstein, which covered half of the cost of its construction.

“Space is one of the standard things that artists need,” said Bill Fick, lecturing fellow of Art, Art History & Visual Studies. “If you don’t have space, it’s really hard to do anything. That’s been one of the real difficulties when it came to any collaboration or cross-disciplinary work in the arts, we just never had spaces. This has opened the door in a big way for that.”

The building, which drew 3,000 people for its grand opening celebration on Feb. 3, houses classrooms, collaborative workspaces with 3-D printers and laser cutters, the studios of Duke’s campus radio station, and The Ruby Lounge, which doubles as gathering space and performance venue. 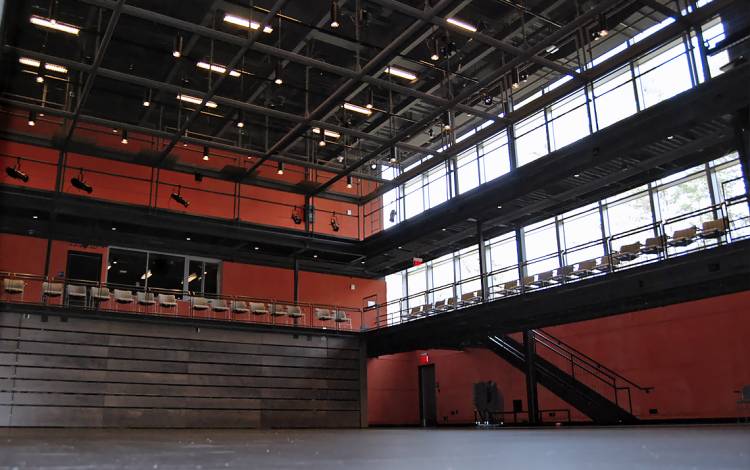 With moveable seats, a versatile lighting system and plenty of open space, the von der Heyden Studio Theater can be configured in a wide variety of ways.

“The screening theater is quite magical,” Kaul said of the space, which can show films in formats ranging from current digital productions to the archival films found in Duke’s libraries. “We’ve never had something like this at Duke before. It’s more than simply ‘state-of-the-art’ as it is capable of screening a range of formats, both old and new.”

That capability has already been showcased as Duke’s Master of Fine Arts in Experimental and Documentary Arts recently wrapped up a sold-out four-day showing at the Rubenstein Arts Center of films by Nathan Dorsky, which are best seen in their original 16-milimeter format.

But for many who use the building, merely having a chance to work alongside one another is a thrill. Shah said that, with offices spread among far-flung buildings, the dance faculty rarely saw one another. Now they share an office suite.

And with students, staff and faculty from many disciplines working and learning in the same spaces, the conditions are perfect for creativity to flourish.

“We’ve never had a central location like this for the arts,” Kaul said. “While the arts have always found a way to thrive at Duke, previously they were localized in various self-contained pockets across campus. In this new space, there are already connections forming between graduate students and undergraduates, between various disciplines, as well as the University and Durham and beyond. It is very exciting to see these exchanges take place.”

Working in a New Normal: Managing Tech from a Distance