Harvesting on a below-freezing morning would have been nearly impossible a few years ago at the Duke Campus Farm.

But on a recent frosty morning, farm staff and volunteers found themselves on their hands and knees in the dirt, picking salad greens.

“If we didn’t have the high tunnel, we’d only be able to work on frost-free days throughout the year,” said Lucas Howerter, Duke Campus Farm production manager. “Our season doesn’t end now.”

Get Your Hands Dirty

The Duke Campus Farm hosts community workdays every Thursday and Sunday from 3 to 5 p.m.

The greenhouse, which is 30 feet wide by 96 feet long, is made of steel and covered in plastic that can be retracted to adjust temperatures and humidity. 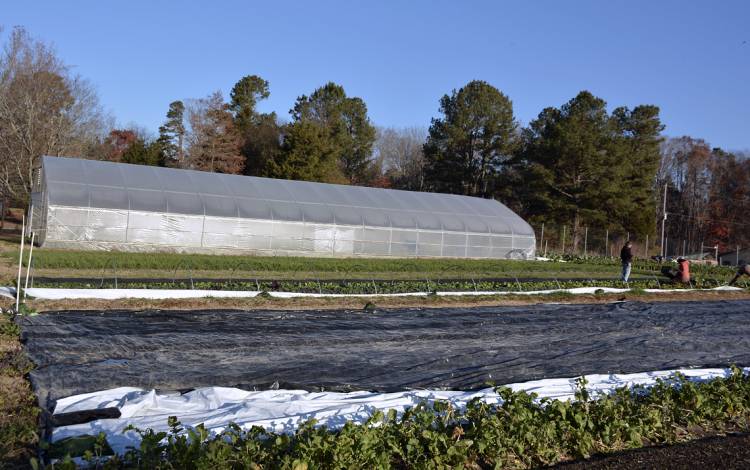 From the greenhouse in winter, staff and volunteers harvest a variety of salad greens like kale, lettuce, arugula and spinach for meals in the Marketplace on East Campus. The farm will transition to growing tomatoes and cucumbers under the high tunnel this summer when the greenhouse will protect crops from heavy rain, which cause nutrients to leave plants and disease to spread.

“The farm is a relatively small space, so our plants are close together. This can result in disease spreading faster,” said Emily McGinty, assistant program manager. “The high tunnel helps us stop that by putting us in control of irrigation.” 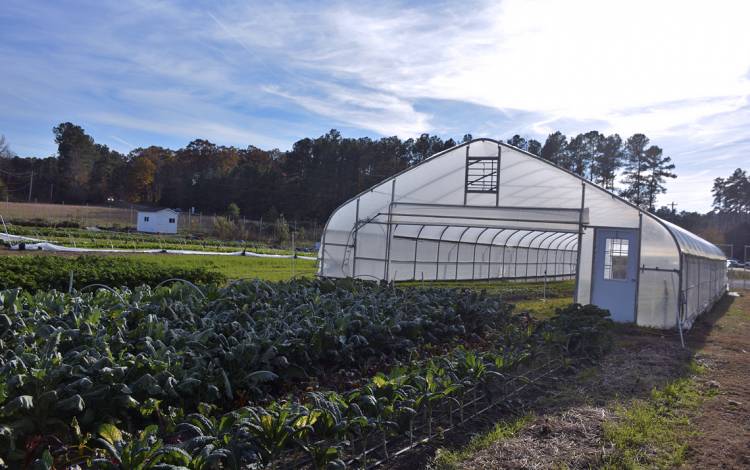 The high tunnel greenhouse also gives Duke Campus Farm more opportunity to involve the community because students and employees are able to work in weather previously too cold to yield crops.

Kati Henderson, education program assistant for Sarah P. Duke Gardens, began interning at Duke Campus Farm as a student in 2015 and volunteers since graduating in 2016. She’s seen the farm evolve over the years.

“They’ve transformed what they’re doing with that plot of land,” Henderson said. “Now, there are so many opportunities to learn with your hands about community, crops and conservation.”