DURHAM, N.C. -- The top Democrat on the U.S. House committee investigating Russian meddling in the 2016 election said Monday that Russia’s efforts were designed to do more than affect the outcome of one election.

“The broader significant issue is this wasn’t just about helping one candidate or hurting another, and it wasn’t just about just tearing our democracy apart,” Rep. Adam Schiff of California told a packed Penn Pavilion while delivering the Terry Sanford Distinguished Lecture. “The Russians are after tearing down the whole idea of liberal democracy, because what they did to us they’ve been doing to others and they’ve had a lot of success.”

“We need to once again establish what ought to be basic premise, and that is we don’t let foreign governments meddle in our democracy.”

Schiff is the ranking member, or top Democrat, on the House Permanent Select Committee on Intelligence. The committee oversees the nation's intelligence agencies, including components of the departments of Defense, Homeland Security, Justice, State and Energy.

While Mueller’s investigation probes whether U.S. laws were broken and who to prosecute, Schiff’s committee is tasked, in part, with informing the public about what happened.

One of the key questions yet to be answered, Schiff said, is when the Russians decided not just to collect data, but to “weaponize data.”

He laid out a number of websites and social media campaigns pegged to the Russians that sought to exploit hot-button issues in the United States during the election, including racial tensions, anti-Muslim views and Hillary Clinton’s health.

“Getting to the bottom of this is about as important as it gets,” Rep. David Price, D-North Carolina and a political science professor at Duke, said while introducing Schiff. 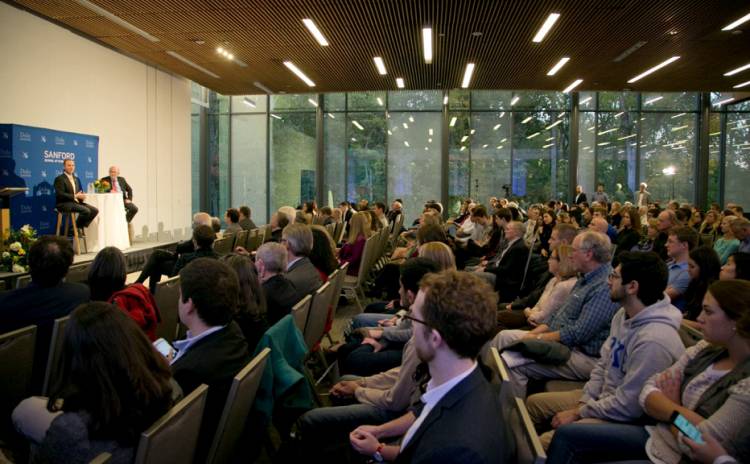 Schiff also criticized the Obama administration for not responding more forcefully when North Korea hacked Sony Pictures Entertainment in 2014 to block the release of the movie “The Interview” that satirized its leader, Kim Jong-un.

“I think the Russians watched that and realized this administration isn’t going to take strong enough action” so they were emboldened, Schiff said. “I think that established that this was no crime.”

He added that he fears a future cyberattack and data dump might include forged documents along with authentic ones that would be nearly impossible to differentiate and thus even more damaging.

Schiff noted a rise in autocratic politicians around the world, including in Turkey and Hungary, and said the rise of such movements is often the result of economic conditions that leave some people behind, not unlike the huge wage gap between the wealthiest and others in the United States.

“Around the world I think people are really wondering if we’ve lost our way. We really are indispensable, there really is no other country that can step into our shoes,” he said, adding that the United States’ legacy as the “champion of democracy and human rights” is at risk.

During the roughly 75-minute talk, Schiff took questions from political science and public policy professor Bruce Jentleson and from the audience.

Responding to a student question, Schiff said the nation should follow California’s model of taking redistricting away from state legislators and giving it to a panel of citizens to ensure legislative districts are drawn fairly.

He told students not to become paralyzed about the bitter state of politics in Washington, but to find a cause they are passionate about and take steps to make a difference.

“We need you now more than ever,” Schiff said.