With the fall semester beginning next week, new rules are in place to ensure foot traffic is the only kind that will be found in high-traffic pedestrian areas on West Campus.

In an effort to ease congestion and make sidewalks safer for pedestrians, a bicycle dismount zone has been implemented for the blue slate sidewalks on Abele Quad and the pedestrian concourse known as the Bryan Center Plaza. Mopeds and motorcycles are prohibited from these areas.

Bicycle and moped riders can continue to ride where cars are permitted. Bike racks within the dismount zone are for bicycles only. Bicyclists can walk bikes on sidewalks to the nearest bike racks. Mopeds and motorcycles can park at designated areas nearby and should display a DMV-issued license plate along with a campus “MRC” parking permit.

Moped and motorcycle drivers are encouraged to review campus parking policies and register for an “MRC” permit, which can be used in a number of designated campus parking areas. Bicyclists can find information on rack locations and other amenities, including perks for registering a bike.

Until September 15, mopeds and cyclists riding in the dismount zone will be issued warnings, while mopeds parked in the wrong place - such as pedestrian egress areas - will be ticketed.

“In order to improve safety and reduce conflicts, the university is re-organizing multimodal traffic on the Abele Quad and the Bryan Center Plaza specifically to give pedestrians the right of way and make these areas safe pedestrian zones,” said Alison Carpenter, transportation demand manager for Duke Parking and Transportation Services. “While we still encourage people to use mopeds and bikes to get to, from and around campus, for these particular areas we encourage bikes and mopeds to park on the periphery and walk to their final destinations along the quad.”

Four additional bike racks were added this summer near Penn Pavilion to meet demand. Bike parking areas are also being added to Science Drive Circle and the Upper Allen Lot behind the Social Sciences Building. Thirty-four moped and motorcycle parking stalls will be added this fall in the Allen Lot, Science Drive Circle, along Research Drive and in the still-under-construction Beta Lot on Union Drive. 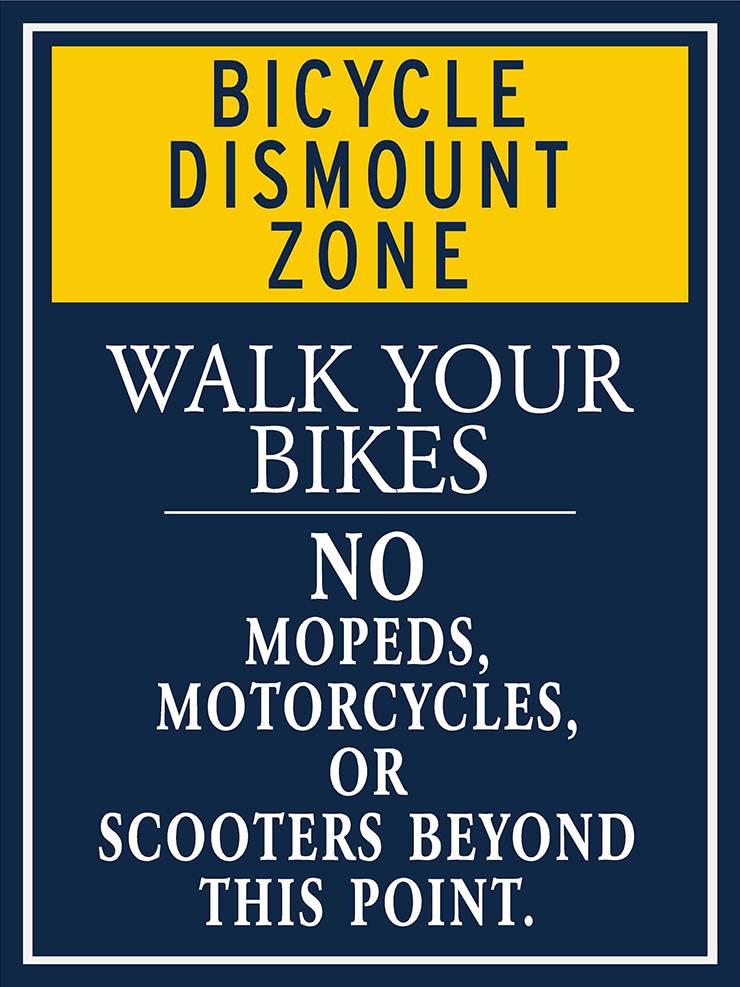 Pedestrian safety is a priority at Duke, as evidenced by the “I Yield for Blue Devils,” a safety campaign in which Duke community members sign a pledge to obey traffic laws and help keep campus roads and crosswalks safe for pedestrians, motorists and bicyclists. So far, roughly 1,500 Duke community members have signed the pledge.

“We’re concerned with everyone’s safety, therefore it’s important to keep the sidewalks open for pedestrians,” said Duke University Police Chief John Dailey.
Easing the bike and moped traffic on West Campus is another step toward the aim of keeping Duke’s pedestrian’s safe. Members of various departments, including Student Affairs, met over the summer to develop a pedestrian-safe solution with the dismount zones.

“We want Duke to be a bike-friendly campus, but we also want to make sure it’s done safely,” said Christopher Roby, assistant vice president for Student Affairs. “… Ideally, we’re trying to put pedestrians first and make sure people are using care when they’re operating bicycles or vehicles.”

Get Outdoors with Duke Rec Gear