Two groups of undergraduate students at Duke University have been creating biomedical devices for their senior design projects with a campus rarity—a titanium 3D metal printer.

Over the past few years, 3D printers that make plastic objects have become somewhat commonplace—Duke’s Innovation Co-Lab has more than 60 of them for use by faculty, staff and students. Metal 3D printers, however, are an entirely different beast, requiring much more infrastructure and a steeper learning curve.

But as the Duke students working out the kinks in the system this past year will tell you, it’s been well worth the investment.

“The metal 3D printer allows us to make designs that could never be fabricated by traditional manufacturing processes,” said Sam Morton, a senior studying mechanical engineering. “It allows us to make actual biomedical devices out of titanium that we can then test and get feedback on from the surgeons we’re working with.”

“The turnaround is so quick,” echoed Dr. Robert Isaacs, associate professor of neurosurgery at the Duke University School of Medicine, who is working with Morton on his project. “You come up with a plan or notice a problem in a prototype, and then almost in no time, Sam comes back and delivers exactly what you just said. You think it, and then you’re holding it. It’s incredible.”

How to Use a 3-D Printer

Sanford Morton, a mechanical engineering student at Duke, explains how to use the 3D metal printer which is a new tool available to students at Duke.

Spinal fusions are common procedures meant to alleviate back pain caused by two vertebrae rubbing together as a disc of cartilage fails. Surgeons insert the device resembling a small, hollow Lego between the two vertebrae, promoting the growth of bone around the device to fuse the two bones and stop future movement.

Current devices for both procedures however, have several drawbacks. Metal-based devices are often too hard and opaque to the imaging technologies doctors use to see how well the bone is growing. Plastic devices are not as strong and do not facilitate as much bone growth.

The two senior design projects sought to create 3D printed devices that would have the best of both worlds. Complex, sponge-like details encourage bone growth in and around the implant while minimizing the amount of metal used and allowing doctors to image the results afterward.

“The titanium 3D printer is a really great opportunity because it lets you create structures that you couldn’t make using normal manufacturing techniques,” said Samantha Sheppard, also a senior in mechanical engineering. “We’re able to create porous structures that are better for bone ingrowth and that really could only be made with this printer.”

“The doctors know a lot about what type of devices they want but traditionally haven’t been able to get them manufactured,” said Morton. “With the 3D metal printer, I’m able to come in and, without any limitations really, create a geometry that satisfies their needs.”

In many ways, the 3D metal printer works much like a traditional plastic 3D printer—by building a piece from the ground up, layer-by-layer. A robotic arm much like a windshield wiper first sweeps a thin layer of titanium dust across a metal plate. A high-power laser then melts the dust in the specific pattern of the bottom layer. The entire plate then drops 30 microns, and the process repeats until the part is finished.

A single part just a few centimeters tall takes the machine between three and five hours to finish. For an entire plate filled with a dozen or more complex parts, a run can take upwards of 20 hours. Either way, the printer allows for rapid prototyping using a metal that is notoriously difficult to machine. 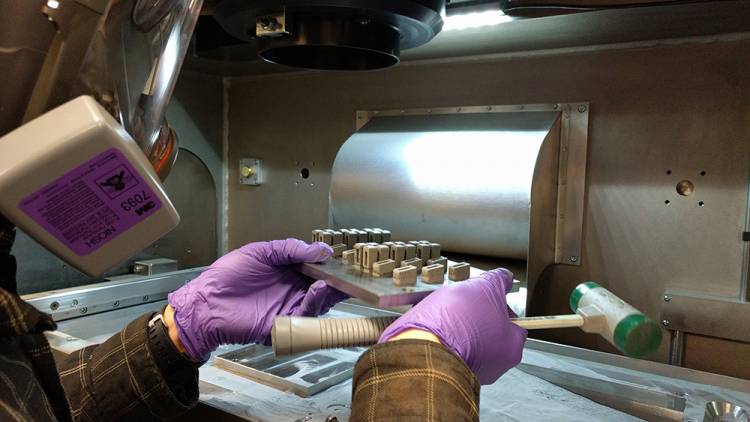 “For titanium, which is a very hard metal to manufacture with other methods, the printer allows you to make intricate parts with internal complexities relatively fast and in a multiplicative way,” said Ken Gall, professor and chair of mechanical engineering and materials science, who led the effort to acquire the printer. “Rather than sending out one design with a complex shape for somebody else to make and waiting for it, you can put in 10 designs and manufacture them all at the same time.”

While the biomedical devices the students are designing are not yet approved for human use, the 3D metal printer allows the students to make pieces that are of the same quality as those that could be eventually used.

“For the students to actually be able to make real parts that match what the doctors want designed and then to actually test those parts is something that you would rarely see at a university,” said Gall, who is associate director of Duke MEDx, a new initiative to strengthen ties between clinicians and engineers. “I wanted to change what Duke was capable of doing and part of that involved bringing a 3D metal printer to campus. It’s going to open a lot of windows for different types of projects at all levels, from freshmen to faculty.” 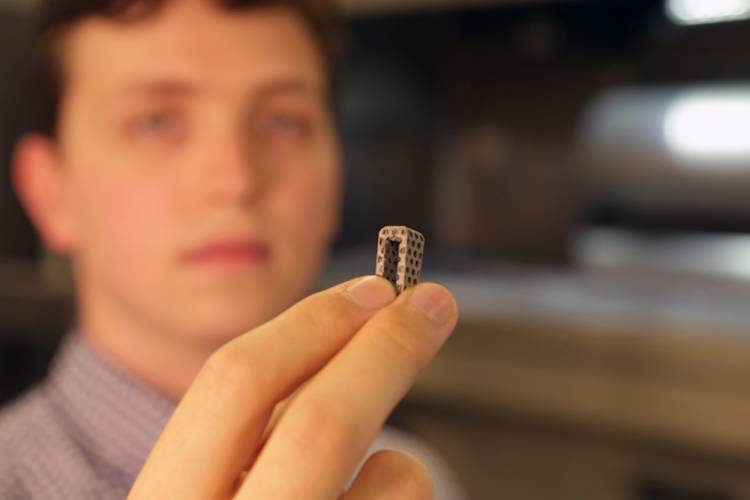 “It’s a unique situation here at Duke, because of the proximity and relationship between the medical center and the mechanical engineering and materials science department,” said Morton. “Traditionally it would be extremely hard for someone like me to not only have access to a printer like this, but to create finalized products, take them over to a medical center, meet with surgeons and then perform CT and tomography scans on my device all within the same day. That’s extremely rare and not necessarily happening at many other institutions.” 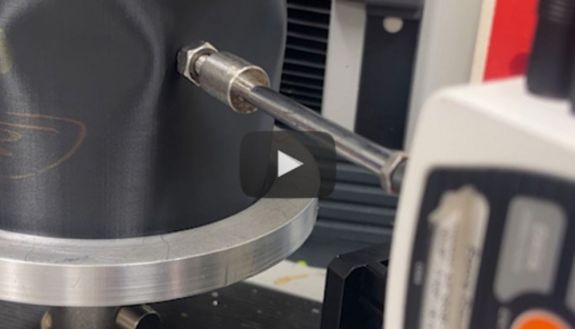