“They had a hallway where they’d exhibit emerging artists,” the Duke art professor recalled with a smile recently. “It was on the way to the bathroom. But it was a good show.”

That was in 1998, when McIver was a young art professor at Arizona State University while also trying to get a foothold as a professional painter.

Decades later, and with thousands of paintings under her belt, McIver has come Full Circle – the apt name of a new retrospective shining a light on her career work. It opened earlier this year at that same Arizona museum – the Scottsdale Museum of Contemporary Art – and will move to the Southeastern Center for Contemporary Art in Winston-Salem in December, where it will run for four months. Its last stop, later in 2023, will be the Gibbes Museum of Art in Charleston, South Carolina.

Beverly McIver: Full Circle opens December 8 at the Southeastern Center for Contemporary Art in Winston-Salem and runs through March 26, 2023. In April it moves to the Gibbes Museum of Art in Charleston, SC. In Durham, the Craven Allen Gallery on Broad Street is currently featuring a collection of McIver’s work in an exhibition called “Passage.” It runs through March 4.

“Hardly any artist gets a retrospective, period,” said Paul Jaskot, chair of Duke’s department of Art, Art History and Visual Studies, where McIver has been a faculty member since 2014. “There are many artists that go their whole careers – famous artists – who never get a retrospective. An actual retrospective that comes out with a catalog, that shows your impact, and the impact of your life on art, that is rare.”

They’re rare in part because they require so much planning, coordination, money, time and goodwill. Someone has to organize it all – choose and find the paintings to display, convince museums or private owners to loan them to the project, and then actually curate it.

But Kim Boganey figured it was worth it. Boganey was, until recently, the director of public art for the city of Scottsdale, but three decades ago she, like McIver, was an up-and-comer in the Arizona art world. The two connected when McIver had that first exhibition, and they’ve been close friends since.

In 2018, Boganey reached out to the museum in Scottsdale, proposing a retrospective and volunteering to lead it. The museum quickly agreed. 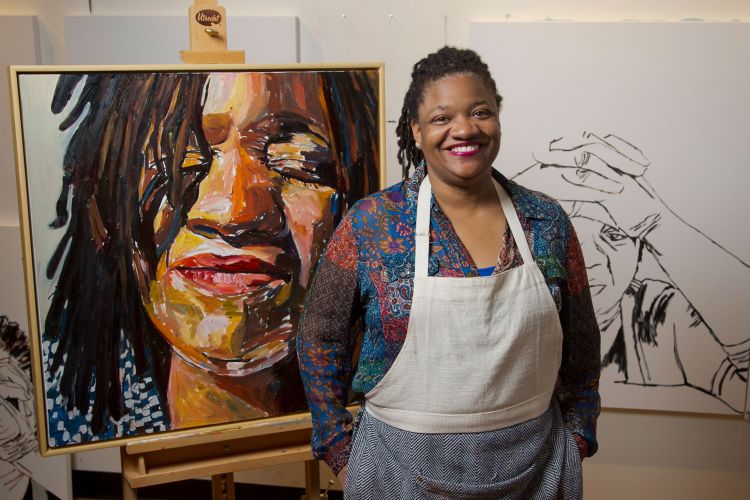 In 2011, McIver was spotlighted in an HBO film “Raising Renee” which examined her promise to her now-deceased mother to care for her intellectually and developmentally disabled older sister, Renee.

She did so, though Renee eventually was able to move into independent housing. McIver’s next project will honor her sister while providing for artists: It will be called “Renny’s Place,” – McIver’s nickname for her sister – and will be an artist-in-residence program housed on McIver’s property in Chapel Hill.

It will be designed as an artist’s retreat primarily for women and people of color, where an artist can stay for a couple of weeks or months, receive food and a financial stipend, and work on their art.

“It will house four to five people a year,” McIver said. “I would teach them the business of being an artist. How to write a grant, how to negotiate, how to market your work. All the things an artist has to do.”

McIver’s work is compelling at least in part because it’s ruthlessly, unabashedly personal. She has painted herself hundreds of times – sometimes semi-nude or vulnerable poses. Her work has tackled depression, the ill health of family members, and all manner of challenges facing an African-American woman in America.

That first show in Scottsdale – at the time an almost exclusively white enclave – pushed some boundaries. And she has been pushing since, though not to be provocative or put herself on display.

McIver views her experiences as examples of relatable broader challenges and struggles. Her life resonates.

“I’m really hoping universally you’ll connect with all the human things I’m talking about, like depression for example,” she said. “Which in that sense isn’t personal as much as it is universal for humans.”

McIver’s early career was notable for her use of blackface in her depictions of herself and others.

There’s a story behind that.

Growing up in a Greensboro housing project during desegregation, McIver rode a bus across town to a white high school. There, she and her sister joined a clown club and painted their faces white. (Black and blackface clowns weren’t exactly mainstream) They wore blonde wigs and pajamas and took part in the local Christmas parade and entertained kids at the hospital.

“I thought it was fabulous. I thought it was the best liberation,” she recalls, laughing. “You’re judged when you’re from the projects. You’re judged when you’re poor, when you receive food stamps. I felt like I had all those labels on me. When I was a clown, nobody even knew I was Black. I could erase the Blackness, erase the poverty, take all of those things away, and people who liked clowns were accepting of me without judgment.”

She continued clowning, always in whiteface, until she went off to college at N.C. Central University in Durham and attended an American Dance Festival performance where, for the first time, she saw performers in blackface.

“I couldn’t sleep that night,” she said. “I kept thinking ‘I’m going to get some black paint and an afro wig and be a Black clown.’

So she did. She leaned all the way into the stereotypes -- painting herself in blackface eating watermelon and fried chicken – things she enjoyed.

But when she put the artwork in a show, African-Americans told her she was perpetuating myths – even though it all rang true to her.

“I did a whole series of paintings about my mother because she was a domestic worker in Greensboro, working for white people,” McIver said. “And Black people told me I was part of the problem. But I thought I was being my authentic self.”

McIver taught at Arizona State University for 12 years and held numerous residencies before coming to Duke to work in 2014. Her work has been displayed at more than a dozen museums; her portrait of the artist Bill T. Jones hangs in the Smithsonian’s National Portrait Gallery in Washington D.C., though if you attend the retrospective in Winston-Salem or later in Charleston, you can see it there as well.

In this retrospective and the full-color, hard-bound catalog that accompanies it, you’ll also find artwork by a handful of McIver’s students and mentors over the years. This too is unusual, and speaks to McIver’s dedication to her arts community, said Damian Stamer, an artist and Durham native who, in one of life’s odd little coincidences, first met McIver while a student at Arizona State. He took her art class and has remained friends; Stamer now lives back in north Durham and is a professional artist, focusing largely on paintings of barns and other structures he runs across in the rural northern stretch of the county.

“She just cares so deeply about her students,” Stamer said. “If someone gave me a retrospective, I’d probably want all the wall space. She’s constantly thinking about what will help her students and what will give them a platform for their work. It’s just part of who she is.”

Including her students and mentors was a way of paying something back to people who have helped her in her work, McIver said.

“I believe in reaching back and bringing people to the table,” she said. “I wanted to include my students because they’re part of me and my development.” 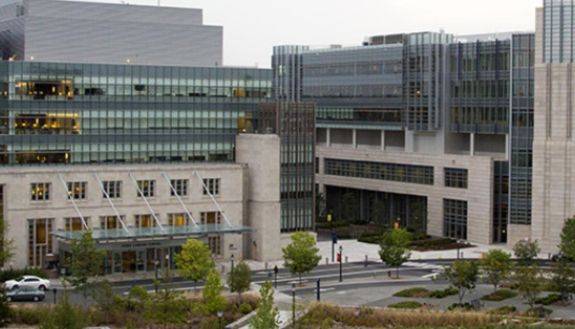