A collection of campus photos was added to the 1928 edition of Duke University’s Alumni Register, meant to give Duke graduates a visual update on the progress of campus construction and pretty pictures of the school they held dear.

Mixed in with photos of East Campus buildings and drawings of buildings to be erected on West Campus, there were a handful of aerial photographs that likely grabbed the eyes of readers.

In 1928, just a quarter century after the Wright Brothers took to the air at Kitty Hawk, airplane flight was still a novelty, meaning few people were able to see the world from up high. The next best thing was aerial photography, which had been around for a few decades with the first images snapped in the late 1850s and early 1860s using primitive cameras lifted skyward by balloons or kites.

So the images of Duke, which allowed viewers to see stately buildings arranged in orderly quads, surrounded by humble Durham neighborhoods that gave way to rolling farmland, likely provided a thrill to people who saw them. 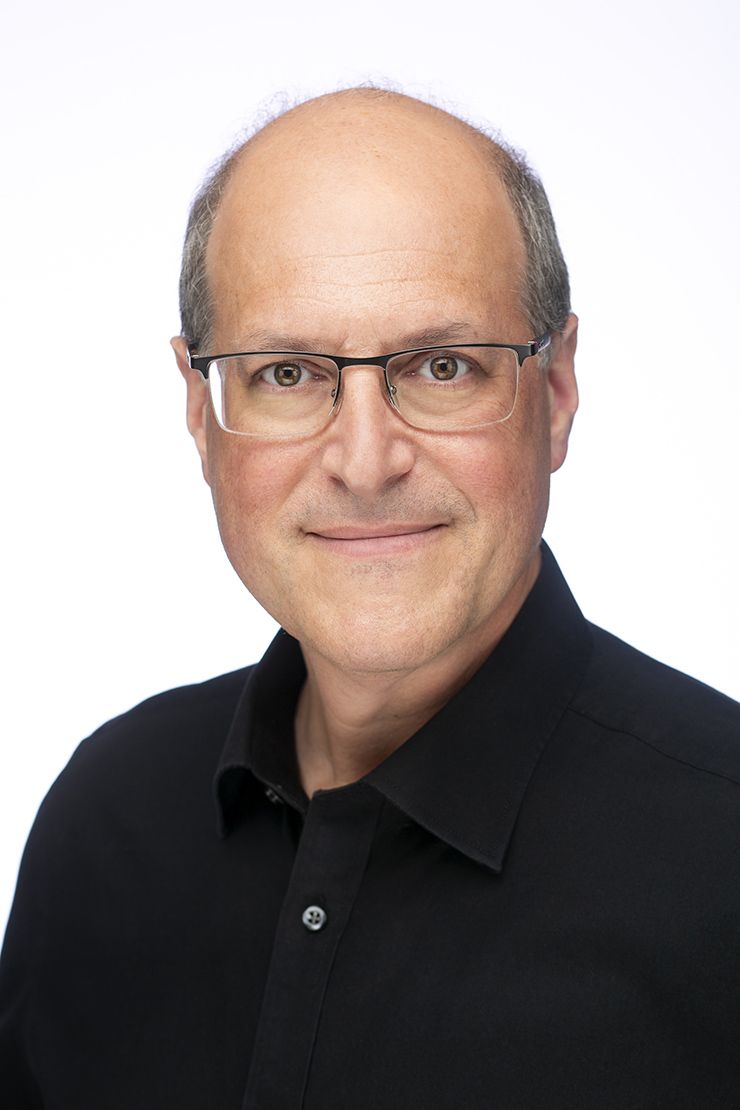 “Being up in the air gives you that larger perspective on life,” said Duke University Communications Digital Asset Manager Bill Snead, who, in his role as university drone pilot, snaps aerial photos of Duke often. “It’s just awesome. It really is.”

While Duke’s campus has grown in the past century, the combination of timeless architecture, natural landscapes and constant change make it a ripe subject for aerial photography.

Until a few years ago, campus aerials would be shot by photographers from helicopters, which was expensive and difficult to arrange. But in recent years, as drone technology has become more affordable, reliable, and safer to use, it’s never been easier to capture images of Duke’s campus from above.

“When I’m out there at sunrise or sunset, and I park the drone up around 80 or 90 feet in the air and wait for the sun to get in the right spot, I’m like ‘I get to be here,’” Snead said. “This is awesome. How great is this?”

Take a moment to enjoy some vintage aerial photos of Duke below from the Duke University Archives and contrast them with current images captured by Snead to see how the view of Duke from up high remains as thrilling as ever. 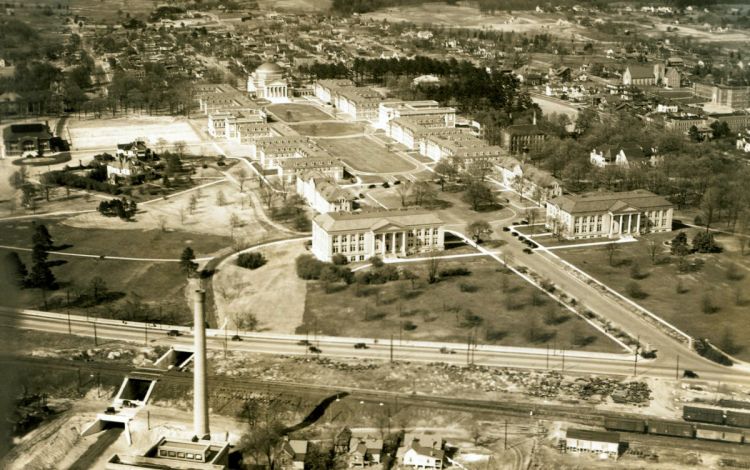 This image from the May 1928 Alumni Register is titled “As a Birdman sees the Quad,” and, according to the copyright in the bottom left corner, was taken by the “Southern Aerial Survey Co.” of Henderson.

“Future generations of students who fly to Duke will get this view of the Quad as they approach from the South,” the caption reads. “In the foreground is the stack of the heating plant; to the left is the underpass connecting the Coordinate College with the main university campus. To the right of the Quad may be seen the Old Inn, Crowell Science Hall, the old Kilgo Home and the old Angier Duke Gymnasium Building. The above picture is a progressive contrast to the old race track and meagre facilities of Trinity College in 1893.” 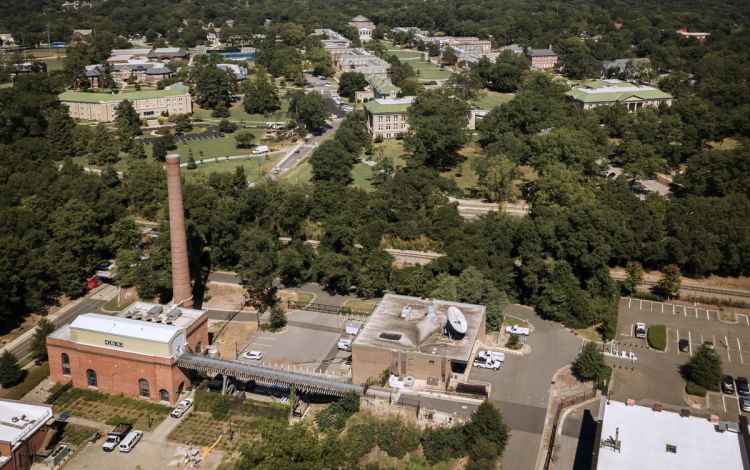 In 2019, Snead used a drone to capture this image from nearly the same spot. While the trees have grown up, obscuring the growth of Durham, the picture shows how much of the character of East Campus remains nearly a century later. 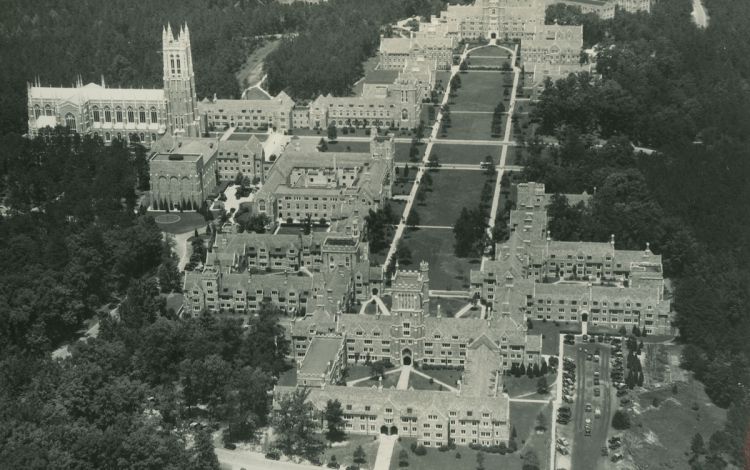 This image taken in 1935 shows West Campus only a few years after being completed. The image, credited in the lower right corner to the “Aerographic Corp.” shows young trees beginning to soften the lines of the quads and the land, which is now home to Duke University Hospital and research campus as forest. 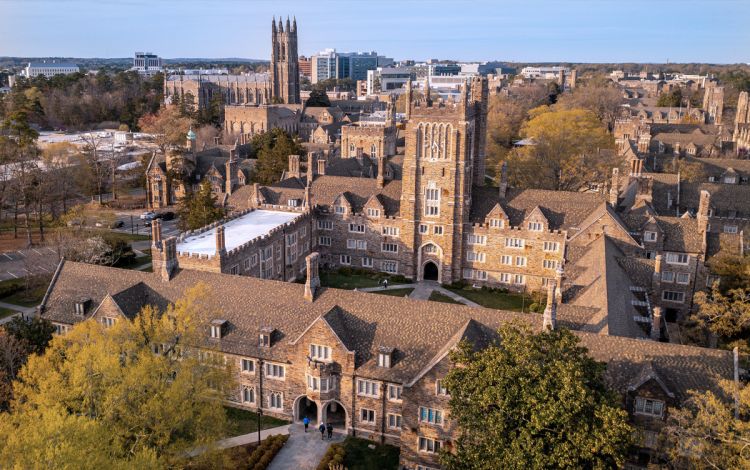 Unlike airplanes, which can soar several hundred feet above campus, the drones used to captures images are at their best when they rise less than 100 feet above the ground. At that height, floating just above the trees, operators such as Snead can easily control their drones while still being high enough to not lose out on any of the awe aerial photographs, such as this one taken earlier this year, can inspire. 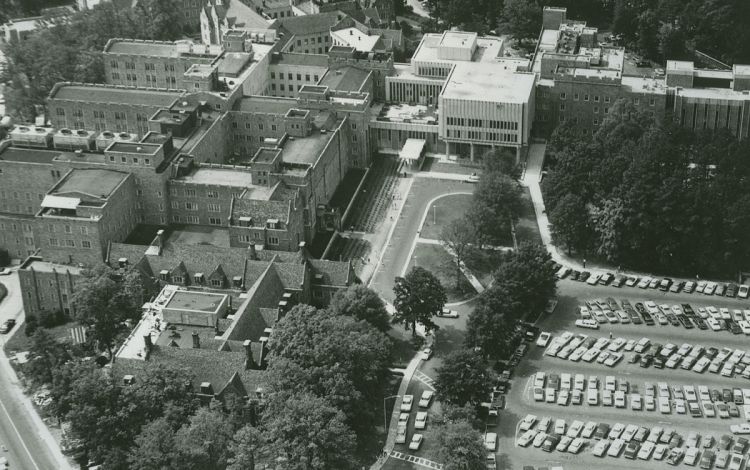 By the time this image was taken in October of 1967, Duke University Hospital was already growing fast. Early pieces of the complex such as the Davison Building at the top left, and Baker House, lower left, have been joined by several new wings and a modern new entrance, seen at the center of the image. 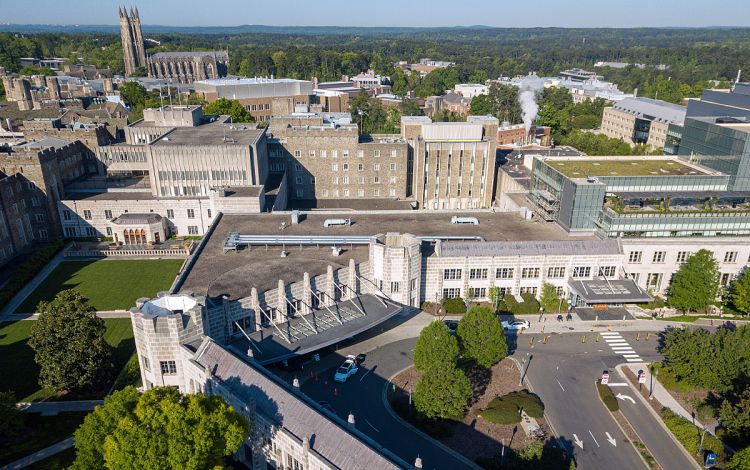 With immense growth over the last few decades, Duke University Hospital now barely resembles what patients would have seen decades ago. But pieces of the earlier footprint can still be spotted from above. In this photograph by Snead in 2020, you can see what was once the hospital’s main entrance at the top left. And just beyond, the distinctive roofline of the Davison Building serves as an architectural gateway to West Campus. 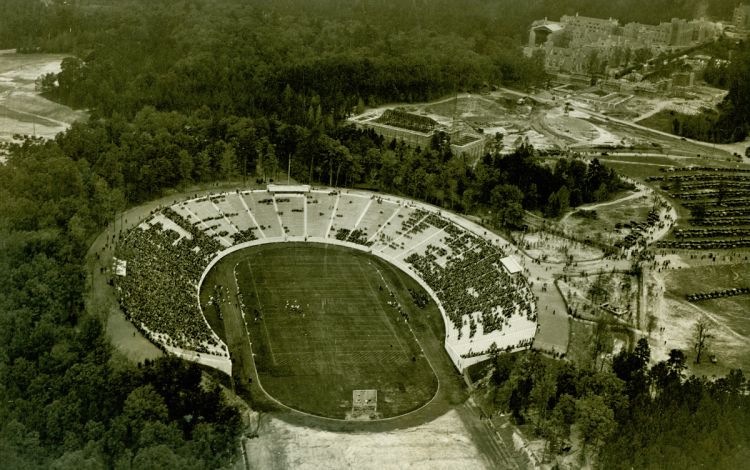 On October 5, 1929, around 25,000 fans watched Duke face visiting Pittsburgh in what was the first football game held in what was then called Duke Stadium. Now Brooks Field at Wallace Wade Stadium, the venue is still home to the Blue Devils.

On the day of the first game, a plane from the Curtiss-Wright Flying Service captured this photo. The company is still in operation today.

The specter of a plane flying over the stadium was mentioned in The Chronicle story, which was published October 9.

“A constant chorus of yells issued from the crowd, up in the press box typewriters and telegraph keys clicked incessantly and from the sky airplane motors gave a droning accompaniment to the staccato barks of quarterbacks,” the story said. 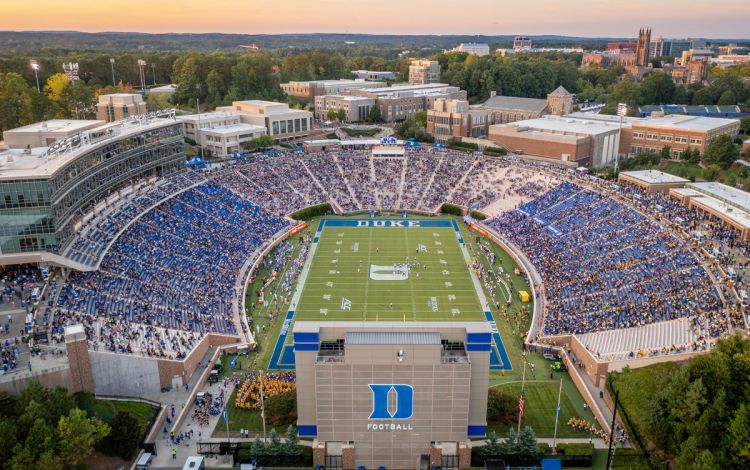 On September 17, 2022, Snead captured this image from above the stadium as Duke welcomed visiting North Carolina A&T. That day, which was the annual Duke Football Employee Kickoff, a crowd of 32,802 watched the Blue Devils roll to a 49-20 win. 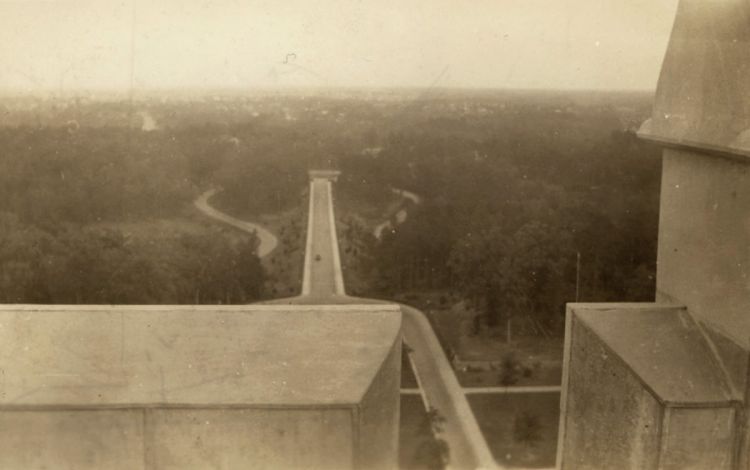 Elizabeth Hatcher Conner, a 1939 Duke graduate, left the Duke University Archives a collection of photos she snapped while a student at Duke. One of her favorite vantage points was from atop Duke University Chapel, where she captured images of Duke’s campus during different times of year. This image, taken in 1939, shows Chapel Drive before the Allen Building was built and prior to Duke Gardens fully taking shape. 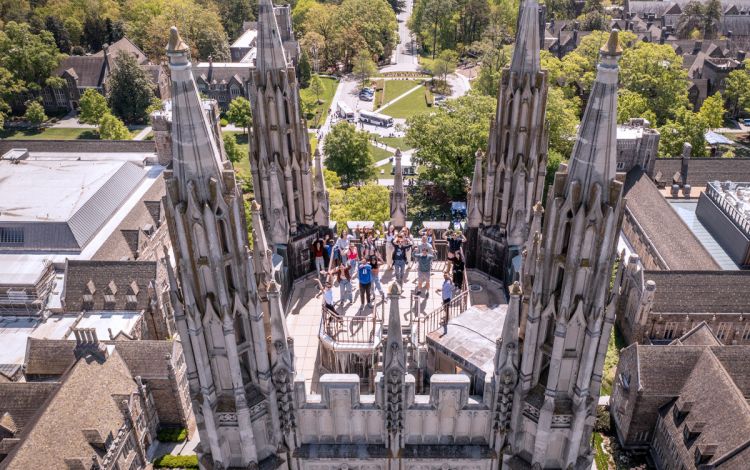 This image, taken by Snead earlier this year, shows how the top of Duke University Chapel remains a thrilling spot to visit. It rewards those who make the trek up there with an opportunity to experience for themselves the timeless beauty of Duke’s campus seen from above.