It was a Blue Devil reunion for the history books.

During the university’s Homecoming Weekend, Sept. 30-Oct. 2, 16 former Blue Devil mascots met up on campus to celebrate the 100th anniversary of the Blue Devil. The group reunited over a shared tradition, participated in an on-field recognition at Wallace Wade—and even toured the super-secret closet where the current Blue Devil keeps all the mascot gear.

In other Homecoming Weekend happenings, more than 400 alumni returned to campus for the university's annual festivities. The weekend's highlights included educational programing, affinity gatherings and recognizing 48 alumni awardees who are making a difference for Duke, in their communities and throughout the world.

Kristin Schroeder '01, an assistant professor of pediatrics and global health at Duke, received a Beyond Duke Award for establishing a pediatric care unit at the Bugando Medical Centre in Mwanza, Tanzania. Along with another Duke colleague, she launched a non-profit called the International Cancer Care and Research Excellence Foundation (iCCARE) to address low survival rates among pediatric cancer patients.

Her work led to an increase in survival rates and enough funds raised to pay for all medications and chemotherapy for every child who is treated at the medical center.

Most former mascots who attended didn’t know each other, says Lisa Weistart ’92, the Blue Devil from 1990-92 and the event’s organizer.

“That was the magical part,” she said. “The shared experience brought us together, and we were instantaneous friends.”

Weistart, who also is a senior director of regional engagement at Duke Alumni Engagement and Development, got the idea for the mascot reunion when she was doing her own research on the Blue Devil a few years ago. She discovered through Duke archival materials that the name found its way into the spotlight in October 1922, when editors of the Trinity Chronicle selected the Blue Devil as the university's mascot after a newspaper poll failed to yield a majority vote among names like the Blue Titans, the Royal Blazes and the Dreadnaughts.

The name came from a nickname given to an elite French Alpine infantry unit during World War I. Called “les diables bleus” because they wore blue capes, the soldiers were popularized by a 1918 Irving Berlin song, “The Blue Devils of France.” The lyrics include the line “Strong and active, most attractive / Are the Blue Devils.”

Knowing the 100-year anniversary of the Blue Devil would occur this year, Weistart worked with partners, including Alumni Engagement and Development and the Varsity Club to find all of the Blue Devils since 1922 that she could.

The challenge, she said, was that the current contact information on hand did not differentiate between mascots and cheerleaders. Weistart, along with Whitney McLeod and Casey Fogg of the Varsity Club, got to work surveying all former Duke cheerleaders and asked if they recalled who had worn the Blue Devil suit when they were at Duke. That search ended with 55 names on a list and at the 100-year reunion event this past weekend, 40 years of Blue Devils represented in one room.

Joseph P. “Jeep” Wedding ’90, who was the Blue Devil from 1989-90, was struck by the loyalty each former mascot felt to their alma mater even today. The spirit in the room was incredible, he said.

“Every one of us would have suited up against UVA in the rain Saturday night to cheer on the team and entertain the fans,” he said. 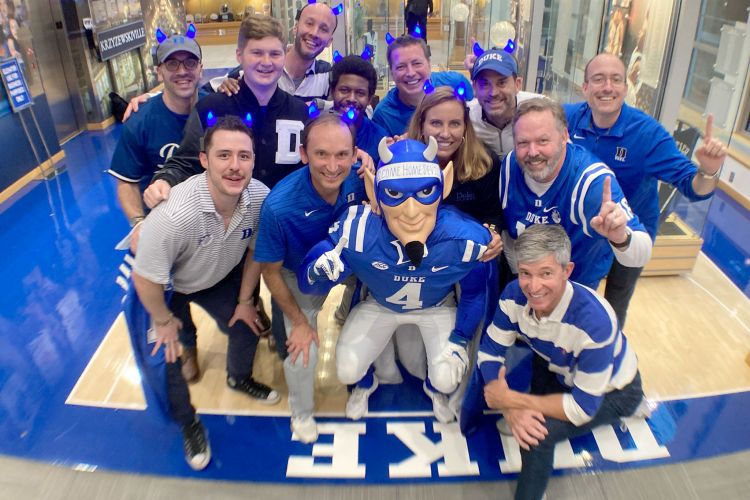