In doing so, it also highlighted the university’s strong presence across the state working in partnerships to serve as an engine for economic development and to address large social issues such as community health, housing and education.

“I am very proud of the extraordinary research conducted at Duke Kannapolis,” said Price, who cited the community-engaged research here as an example of one of the planks of the university’s strategic framework. “The collaborative, community-based approach is an innovative model to address the most pressing challenges and promote healthier and more equitable communities in North Carolina and beyond.”

A two-hour drive from Durham and 26 miles north of Charlotte, Duke Kannapolis underscores the impact the university makes on the lives of state residents far beyond its main campus. For  participants enrolled in Duke studies in Kannapolis, it's bringing advanced Duke-based research to their home community.

Founded in 2007 on the North Carolina Research Campus, Duke Kannapolis has enrolled nearly 14,000 participants using a successful community-based engagement. A part of the Duke Clinical and Translational Science Institute, Duke Kannapolis manages a wide variety of research projects focusing on the exploration, discovery and validation of biomarkers that will inform a deeper understanding of health and disease.

Representing Duke University, Duke Health and Duke LifePoint Healthcare issues and interests with government officials and legislators in Raleigh and throughout the state.

Learn More About Duke In NC

The cornerstone of the Duke Kannapolis infrastructure is the MURDOCK Community Registry and Biorepository, a groundbreaking longitudinal study that enrolled 12,526 community members and collected more than 400,000 annotated biospecimens. A new initiative is underway to convert the MURDOCK Biorepository into rich datasets by making thousands of biospecimens and associated clinical outcome data available to all Duke researchers.

Duke Kannapolis features a diverse community of engaged research participants, considered valued partners. Study teams work to ensure that cohorts are representative of the community, and Duke Kannapolis recruitment features demographic and socioeconomic diversity. Many participants co-enroll in more than one study, with 22,339 total enrollments by 13,886 participants so far.

An unusual research facility that functions as an engine to accelerate population health research supporting the Duke research community, Duke Kannapolis manages a wide variety of research projects focusing on the exploration, discovery, and validation of biomarkers that will inform a deeper understanding of health and disease. Duke Kannapolis offers a broad range of assets and capabilities for investigators.

After touring the Appalachian State University Human Performance Laboratory and UNC Nutrition Research Institute, Price ended his four-hour visit noting the remarkable transformation of Kannapolis, home for more than a century to a massive textile mill shuttered in 2003 during the largest single layoff in North Carolina history. Today, the city is thriving and growing, focused on health, research, and innovation, and the North Carolina Research Campus stands where Cannon Mills once stood.

In 2015, the City of Kannapolis purchased the downtown district and launched a revival strategy inspired by the revitalization of downtown Durham, complete with a $52 million minor league ballpark. The City’s $133 million public investment has attracted $240 million in private investment, and people are returning to the former mill town. Between 2010 and 2020, the population increased from 42,625 to 53,114 people. Kannapolis straddles Cabarrus and Rowan counties. 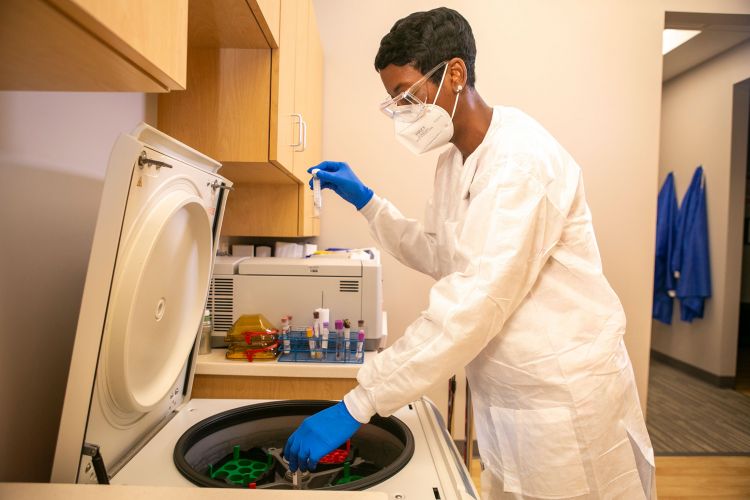