DURHAM, N.C. -- New genetic analyses of wild baboons in southern Kenya reveals that most of them carry traces of hybridization in their DNA. As a result of interbreeding, about a third of their genetic makeup consists of genes from another, closely-related species.

The study took place in a region near Kenya’s Amboseli National Park, where yellow baboons occasionally meet and intermix with their anubis baboon neighbors that live to the northwest.

Researchers have monitored these animals on a near-daily basis since 1971, noting when they mated with outsiders and how the resulting offspring fared over their lifetimes as part of the Amboseli Baboon Research Project, one of the longest-running field studies of wild primates in the world.

Yellow baboons have yellow-brown fur with white cheeks and undersides. Anubis baboons have greenish-grey fur and males with shaggy manes around their heads. Although they are distinct species that diverged 1.4 million years ago, they can hybridize where their ranges overlap.

By all accounts, the offspring of these unions manage just fine. Fifty years of observations turned up no obvious signs that hybrids fare any worse than their counterparts. Some even fare better than expected: baboons that carry more anubis DNA in their genome mature faster and form stronger social bonds, and males are more successful at winning mates.

But new genetic findings published Aug. 5 in the journal Science suggest that appearances can be deceiving.

The research sheds light on how the diversity of species on Earth is maintained even when the genetic lines between species are blurry, said Duke University professor Jenny Tung, who led the project with her doctoral students Tauras Vilgalys and Arielle Fogel.

Interspecies mating is surprisingly common in animals, said Fogel, who is a PhD candidate in the Duke University Program in Genetics and Genomics. Some 20% to 30% of apes, monkeys and other primate species interbreed and mix their genes with others.

Even modern humans carry around a mix of genes from now-extinct relatives. As much as 2% to 5% of the DNA in our genomes points to past hybridization with the Neanderthals and Denisovans, ancient hominins our ancestors encountered and mated with as they migrated out of Africa into Europe and Asia. Those liaisons left a genetic legacy that still lingers today, affecting our risk of depression, blood clots, even tobacco addiction or complications from COVID-19.

The researchers wanted to understand the possible costs and benefits of this genetic mixing in primates, including humans. But modern humans stopped interbreeding with other hominins tens of thousands of years ago, when all but one species -- ours -- went extinct. The wild baboons of Amboseli, however, make it possible to study primate hybridization that is still ongoing. 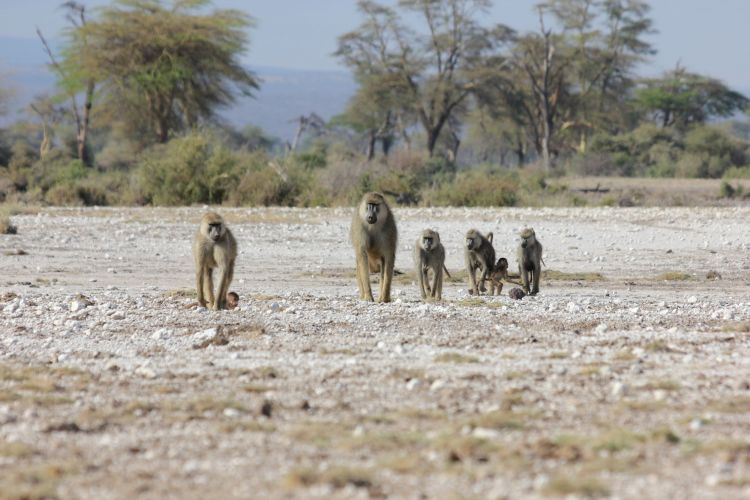 The researchers analyzed the genomes of some 440 Amboseli baboons spanning nine generations, looking for bits of DNA that may have been inherited from anubis immigrants.

They found that all baboons in the Amboseli basin of southern Kenya today are a mix, with anubis DNA making up about 37% of their genomes on average. Some have anubis ancestry due to interbreeding that occurred fairly recently, within the last seven generations. But for nearly half of them the mixing happened further back, hundreds to thousands of generations ago.

During that time, the data show that certain bits of anubis DNA came at a cost for the hybrids who inherited them, affecting their survival and reproduction in such a way that these genes are less likely to show up in their descendants’ genomes today, said Vilgalys, now a postdoctoral scholar at the University of Chicago.

Their results are in line with genetic research in humans, which suggests that our early ancestors paid a price for hybridizing too. But exactly what Neanderthal and Denisovan genes did to cause them harm has been hard to tease out of the limited fossil and DNA evidence that’s available.

The researchers say that the baboons at Amboseli offer clues to the costs of the hybridization. Using RNA sequencing to measure gene activity in the baboons’ blood cells, the researchers found that natural selection is more likely to weed out bits of borrowed DNA that act as switches, turning other genes on and off.

The next step, Fogel said, is to pin down more precisely what is ultimately affecting these hybrid baboons’ ability to survive and reproduce.

Genomic data allows researchers to look back many more generations and study historical processes that can’t be seen directly in the field, Vilgalys said.

“But you need to look at the animals themselves to understand what genetic changes actually mean,” Tung said. “You need both fieldwork and genetics to get the whole story.”

“We’re not saying this is what Neanderthal and Denisovans genes did in humans,” added Tung, now at the Max Planck Institute for Evolutionary Anthropology in Germany. “But the baboon case makes it clear that genomic evidence for costs to hybridization can be consistent with animals that not only survive, but often thrive.”