DURHAM, N.C. -- Liping Feng M.D., an associate professor of obstetrics and gynecology and affiliate of the Duke Global Health Institute, wants to know whether toxic  environmental exposures increase the number of cases of preeclampsia, a serious, potentially life-threatening complication during pregnancy.

Her question has taken her from tracking late-night shipments of e-waste into Taizhou, China to measuring the reproductive health of rabbits that drink water that has been contaminated to represent the Haw River in Pittsboro, North Carolina.

Besides devoting her medical career to the health of mothers and babies, Feng has a personal interest in these questions. “Both my daughters have some kind of clinical anxieties,” she said. “I don’t think it’s a genetic issue because none of our family members have similar disorders, at the same time, the issues happened to both of them. I suspect that in utero environment chemical exposures might contribute to these problems.”

Before the COVID-19 pandemic, Feng worked from 2017 to 2019 in Taizhou on projects measuring the effect that recycling of old hardware from electronic products, known as e-waste, has on maternal and child health.

“Seventy percent of the world’s e-waste was recycled in two locations within China, where families would convert their houses to e-waste recycling centers,” Feng said. A part of this project required her to keep track of e-waste shipments to gauge exposures among the population she was studying.

But just three months after returning to Durham in late 2019, the global pandemic dramatically altered the course of Feng’s research. As the world went on lockdown, it quickly became clear that she would not be able to continue working with her Chinese colleagues and that she would need to shift her focus to a local research project.

Feng had been working on exposure during pregnancy to per- and polyfluoroalkyl  compounds, called PFAS, with her Shanghai colleagues. Heather Stapleton, a Duke professor and exposure scientist, was conducting research that measured concentrations of PFAS in drinking water from Pittsboro.

These chemicals, known as “forever compounds” because of their durability, are used to repel moisture and grease across a variety of different everyday objects like carpets, upholstery and even food packaging.

Stapleton, who conducts research on environmental exposures, had discovered PFAS in her family’s own drinking water in Cary, N.C., and wanted to know more. Knowing about Feng’s experience and desire to start work on a new project, Stapleton reached out and invited her to collaborate on the ongoing project in Pittsboro. 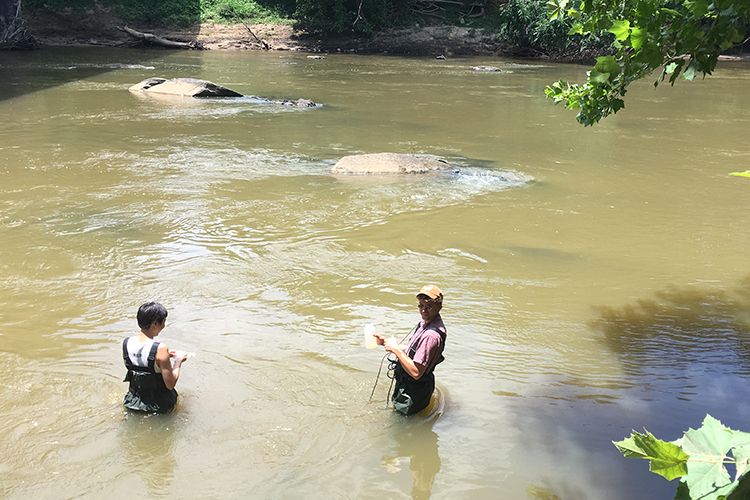 Together, they have gone on to conduct “both spatial and temporal sampling on the Haw River to understand how variable it was, which might provide some insight into sources of PFAS in that community,” Stapleton said.

Feng was eager to begin working with Stapleton and knew that PFAS contamination is “a local issue that is also a global issue.” These chemicals have a long history and according to Feng, are consistently adapting to new environmental rules and regulations. But Feng is concerned by the growing number of people who are being exposed and the lack of knowledge about the potential dangers of PFAS.

By the time Feng joined the project, Stapleton’s team had collected water samples from a broad portion of Central North Carolina. The samples showed that PFAS compounds were present in samples from drinking water sources in Cary, Jordan Lake, and the Haw River.

Stapleton’s team worked with collaborators at the Environmental Protection Agency (EPA) and NC State University to show that the PFAS compounds in Jordan Lake could be traced upstream to the Haw River. Stapleton’s team was then able to narrow their focus to testing in Pittsboro, a town that gets its drinking water from the Haw.

The researchers noticed higher concentrations of PFAS within their sampling that was higher than surrounding cities that use other water sources.

Stapleton began to explore the exact amount of PFAS concentrations that residents in Pittsboro were being exposed to and how their exposure can impact their health. Feng’s expertise in the field of maternal and child health would become a key part of the questions that the researchers wanted to ask once they understood the exposures.

Feng designed a study that raised rabbits who were drinking water that was engineered to match the concentrations and combinations of PFAS found in Pittsboro. Specifically, she wanted to know whether exposure to this water could be associated with an increase in preeclampsia cases. Previous studies have made this association for individual PFAS compounds, but Feng wanted to measure the exact PFAS mixture that Pittsboro residents were consuming.

Preeclampsia is a high blood pressure disorder that occurs during pregnancy. It affects organ functions such as the kidneys, liver, and lungs. Preeclampsia is a serious and sometimes life-threatening disorder among pregnant or recently pregnant people. Feng suggests that identifying this connection – if any -- is one step in the process of understanding the true effect of PFAS contamination and exposure throughout the entire world.

Feng and Stapleton both said that this experiment is innovative because it uses a real-world mixture of PFAS compounds, unlike many lab studies that just look at the effects of single PFAS compounds in isolation. “Studying the mixture allows us to conceptually mimic our real life,” Feng said. “And that's the advantage of the mixture.”

In the real-world, chemical exposures can be like a stew, she explained: the flavor of an individual ingredient before it is added to the pot is not the flavor you get at the end.

“Very few studies look at a mixture of PFAS compounds, and I agree that's really important because people are not exposed to one PFAS compound at a time, we are exposed to mixtures,” Stapleton said.

Feng’s analysis confirmed an association between the consumption of the Pittsboro drinking water with PFAS and gestational hypertension and preeclampsia among the rabbits. Feng immediately began to consider how to move forward.

In addition to their laboratory work, Feng and Stapleton facilitated town halls to help Pittsboro residents become more aware of PFAS compound exposure. The news of this exposure was naturally concerning for residents because they were unsure of how their physical health would be affected by their exposure.

“Community members don't know about this problem and after they knew, their first reaction was, ‘Wait, what is going on?’” said Feng. The researchers knew that they would have to carefully educate the community on their exposure.

Stapleton said the team’s strategy centered on transparency. “We show them the data, and where their average exposure levels are and how they compare to average levels in the U.S. based on the CDC bio-monitoring program.”

Feng and Stapleton are continuing to work on measuring the effect that exposure to PFAS compounds have on physical health. Specifically, Feng’s group found that in utero PFAS exposure in rats resulted in alterations of local motor development in offspring. While their research is relatively new, Feng is using her findings to identify other communities around the United States and around the world that are interested in researching PFAS compound exposure. Her results have been published in  environmental health journals and are being shared among environmental conferences that are now centering research like hers with the goal of bringing awareness to PFAS exposure.

Feng has most recently created a group of people who are interested in PFAS exposure research. She’s also developing guidelines and education programs that will be designed to increase community awareness regarding PFAS compounds.

Feng said her primary hope and mission for her research is to “increase physician awareness and have standard guidelines for physicians to know how to educate and take care of their patients who are exposed to PFAS compounds.”

Alessandro Figueroa is a second-year graduate student at the Gillings School of Public Health at UNC.

'Some Places Will Not Be Livable'