Historical photos featured in the video are from the Curran-Laird collection, University College Dublin. plattenbaustudio, Mid-afternoon in the early summer of 1904 on North Circular Road, Dublin, 2022. Lithographic print

As the literary world celebrates the centenary of Ulysses, the acclaimed James Joyce novel, Duke professor Helen Solterer has contributed some new scholarship on literature and history, stemming in part from her family’s friendship with the legendary writer. 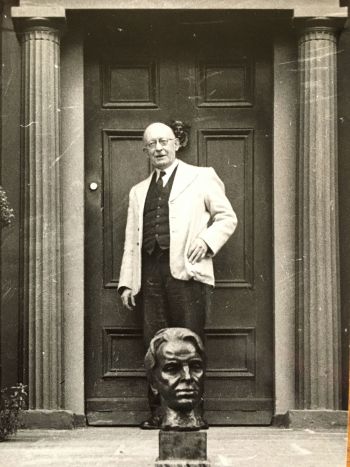 A professor of French and Francophone Studies at Duke, Solterer recently worked with several co-authors from University College Dublin to re-issue James Joyce Remembered, which her grandfather, C.P. Curran, published originally in 1968. Curran and Joyce were college buddies and peers in early 20th century Dublin.

As Curran’s granddaughter, Solterer drew on both personal and professional experiences in this new project, which looks deeply at the lives of Joyce, Curran and their contemporaries. The collaborative book reveals some new details of their lives in Dublin at a crucial time in Ireland’s fight for independence from Great Britain, and the Civil War that erupted in the year Joyce published Ulysses.

She spoke to Duke Today about the project. Here are excerpts:

What was discovered anew in creating this new book?

James Joyce is often seen as a solitary, aloof genius. What we so enjoyed discovering and investigating together, was the cohort of remarkably creative people around him. They were friends from their very first days at University College Dublin. That was my grandfather, C.P. Curran, that was Joyce, that was another talented political thinker, Thomas Kettle. Writer Padraic Colum was another intimate friend.

They walked the streets of Dublin; they met up at the National Library – these are all scenes in Ulysses. When we put all these people together, Joyce is a member of a larger creative community for whom fiction, not only in novels, but in theater, went hand in hand with political action.

We also discovered something little known about C.P. Curran, as a political activist. Often he’s been identified, especially by Joyce scholars, as cautious, as a bit of an aesthete. Actually, what we discovered … was Curran’s activism as a freelancer. An undercover journalist reporting on the War of Independence in the British press, the liberal press, The Nation.

He used a pseudonym because he would have lost his job in the British court system if he had been known to be writing radical political journalism for Irish independence, and a Republic.

The cover of the book features a very famous photo of James Joyce. For you, it’s a family photo. Can you explain?

Many people, I figure, would recognize a photograph of a young James Joyce with a cap, and his hands stuffed in his pocket, ready to meet the world.

It was a photograph I grew up with because my grandfather took it in his parents’ back garden in the summer of 1904. It's the iconic portrait of a young Joyce. You might have seen it on covers of Ulysses.

You might have seen it on stamps. Certainly, it's all over the Internet right now, and in Dublin.

What was amazing for the group of us, again, was to discover more about that photograph. In our book, architects Jennifer O’Donnell and Jonathan Janssens do a remarkable drawing of Dublin at the time and in the exact place of the photo : it gives a surprising view of the city, 1904.

For the family of my grandfather, the photograph was an accomplishment at the time. They were city, working-class people, for whom cameras and photographic equipment were brand new. My grandfather and his father began to experiment in the back garden, taking a series of photographs. And so Curran was launched as an amateur photographer of his friends and their hometown.

What do you remember about your visits to Ireland to visit your grandfather each summer when you were a child?

During the 1960s, my mother brought my father and me back to Dublin, to stay with my grandfather in his house, every summer until his death in 1972.

As soon as we arrived, Daddo, as we called my grandfather, ushered us into his book room, crammed floor to ceiling with books, photographs, with drawings and bits of sculpture. That jumble of artistic things, I sensed, was powerfully important to him, and it inspired me, summer after summer that I spent in that room with him.

The Irish painter Jack Yeats, the brother of the poet W.B. Yeats, designed a bookplate for my grandfather, likely in the 1940s. As far as I can tell, he's capturing this labyrinth of books, drawings, sculpture and many objects; books in many languages, now part of the James Joyce Library at University College Dublin.

That's one of the reasons, I suspect, I fell in love with French.

Written by Eric Ferreri; video by Julie Schoonmaker and Jacob Whatley; photography by Megan Mendenhall and design by Sam Huntley