In 2003, Grant Hill was lying in Duke Hospital, recovering from a difficult ankle surgery. He had already endured four previous surgeries on that ankle, plus a dangerous staph infection. Feeling low, he doubted whether he would ever return to the basketball court.

Then-head coach Mike Krzyzewski came to visit his former star in the hospital and told him, “You’re going to get back out there. You’re going to play again.” Hill says his coach’s words made him believe it – and after his recovery, he played in the NBA for nine more years.

That was just one of the stories the two-time All-American, NCAA champion, Olympian and NBA Hall of Famer shared Wednesday evening about the influence that Duke has had on his life. Hill discussed his career and his joy in being a Blue Devil in a conversation with men’s basketball head coach Jon Scheyer in Page Auditorium to promote Hill’s new memoir, “Game: An Autobiography.” 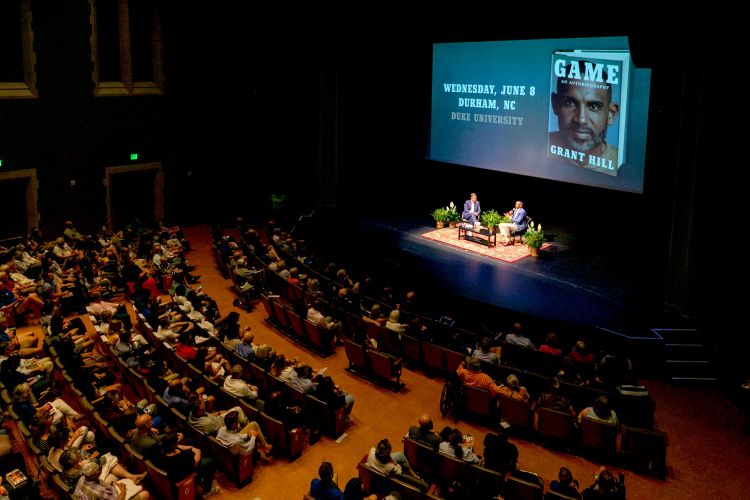 Sponsored by the Duke Alumni Association, the free event drew a large, appreciative audience of Duke alumni, students, staff and fans who cheered the memories, insight and humor shared by the former Duke star.

Hill began by explaining that he “fell in love” with the game of basketball not watching the NBA but watching the 1982 NCAA Final Four game between UNC and Georgetown. That spark began a stretch in which his father, former NFL running back Calvin Hill, took the young Grant to five consecutive Final Fours as a spectator.

Now a member of the Duke University Board of Trustees, Hill shared memories of bonding with teammates, from roughhousing in hotel rooms to doing donuts in a parking lot to a karaoke night before the 1991 Final Four game against UNLV.

“I was fortunate to be a part of some great teams. And we get to re-live it every March:  The Pass. The Catch. The Shot,” referencing the legendary 1992 game-winning shot by Christian Laettner against Kentucky, assisted by a perfect long pass by Hill.

Hill also discussed how Duke helped him grow into his talent and leadership potential.

“Growing up, I was very much an introvert. I stuttered as a kid. I didn’t raise my hand in class. I didn’t want to stand out. I wanted to fit in.”

He said he is grateful to Krzyzewski for “giving me the permission to be great.”

In another moment that drew laughs, a student in the audience said he was one of several students named Grant in his Duke class. The student told Hill, “That is not a coincidence, and that is another of your legacies at Duke.”

Hill also discussed the challenges he had faced. Asked how he persevered through his injuries, Hill responded, “Sport conditions you to fight, to believe that you’re going to win.”

He also spoke about his involvement in the Durham community, from visiting local elementary schools to attending high school basketball games at Hillside and Jordan. A history major at Duke, Hill said he appreciated the rich history of Durham’s African American community.

Scheyer and Hill compared Hill’s playing days in the 90s with the landscape of college sports today, including “one-and-done” players, the transfer portal, and the new name, image, and likeness (NIL) regulations. Praising Scheyer’s vision and ability to communicate in this “different environment,” Hill called it “an exciting time” for Duke basketball.

Hill recalled that the former Duke basketball player Art Heyman, who was named national Player of the Year in 1963, used to stop by practices in the 90s and joke with the team. Reflecting on the age gap between himself and Duke’s current players, Hill said wryly, “I realized—now I’m Art Heyman.” 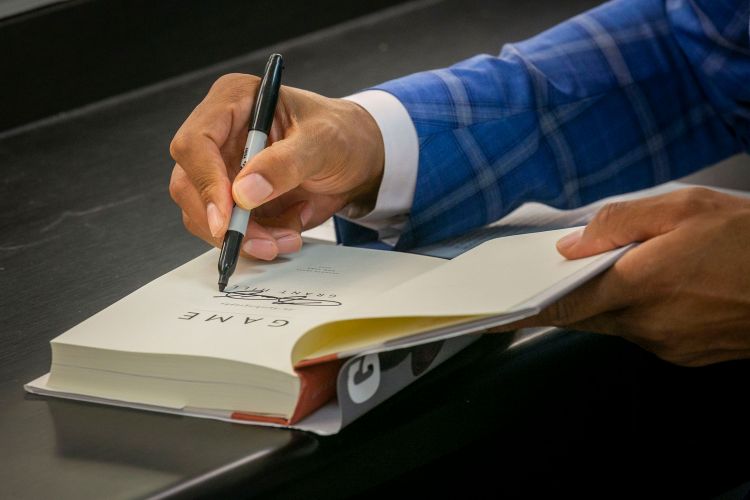