A repeal of Roe vs. Wade could turn a midterm election many expected to be sleepy into one with far more drama by waking up Democratic voters who may not otherwise have been wholly engaged, said Asher Hildebrand, an associate professor of the practice at the Sanford School of Public Policy.

“I do think this could be a game-changer,” Hildebrand said. “It raises the perception of the stakes especially among Democratic and Democratic-leaning voters.”

Hildebrand spoke to reporters during a media briefing at Duke. He was joined by Deondra Rose, associate professor of public policy and political and director of POLIS, Duke’s Center for Politics.

“I think we’re likely to see Democrats and Republicans use this possible, amazing change in Roe vs. Wade as a political talking point, as something to really generate interest in their base,” Rose said. “I think we could see this actually drive turnout to a level we might not have seen otherwise.”

Rose and Hildebrand also discussed state congressional races, the tendencies of young voters, and other issues. Here are excerpts:

“We know that election turnout tends to be suppressed during midterms. Since 2018, however, we’ve seen some interesting -- increases in turnout during the midterms particularly among young Americans. A lot of that is driven by the fact that there are some really interesting races. There’s a lot of contention. Inspiring candidates, interesting candidates tend to inspire participation and turnout.”

“One might argue that having someone like Donald Trump on the ticket would generate higher levels of turnout. Of course, he’s not on the ticket right now. But is he? We’re seeing he has an impact on races at all levels right now. What’s interesting to me is people who have worked to align themselves with Donald Trump are pointing to the news of this week and saying, ‘This is thanks to Trump.’ ” 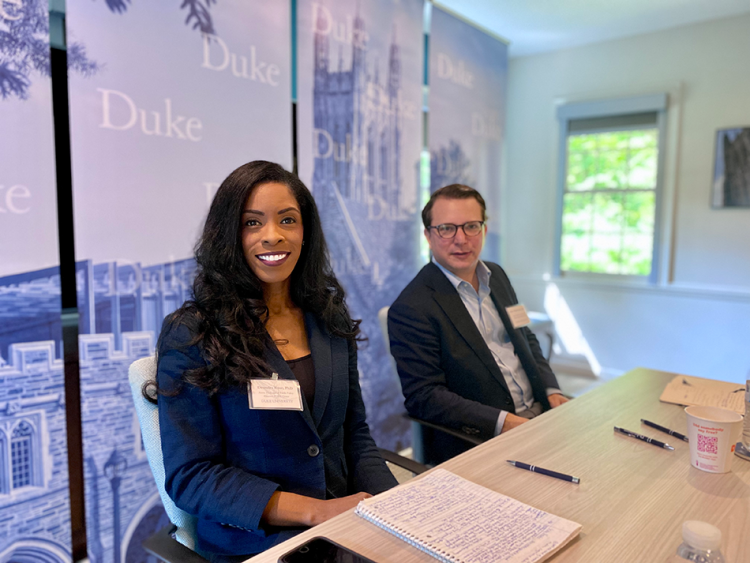 “Does this increase turnout overall? And turnout especially among Democrats? But also, it really shifts the focus towards some of these state-level races. North Carolina is one of two states in the South with divided government. A lot of states have already passed legislation to criminalize abortion if Roe vs Wade is repealed. All of a sudden we’re really hanging in the balance as one of the few states in the region. We haven’t ruled one way or another. I don’t know if voters will make that distinction, but you can bet that a lot of national organizations looking for places to invest will make that distinction.  A lot of national money that might not have come to North Carolina otherwise will start coming into the election.”

ON THE INTENT OF THE LEAKED SCOTUS DRAFT DECISION

“In this very polarized political culture, I find it hard to believe there wasn’t some political intent behind that leak. It’s interesting to see how the Democrats and the Republicans are responding to it. I do think there’s a power play here.”

ON HOW CANDIDATES REACT TO ABORTION NEWS

“My immediate reaction is that it will become a defining, probably the defining issue, for the general election in the fall. I don’t know how much it will trickle down to specific primary contests where voting is already occurring. You might see some generalized impact on voting.”

“It will be interesting to see how much daylight there is among the Republican contested primaries. You’re seeing some Senate candidates saying, ‘Our prayers are being answered,’ just really celebrating the apparent ruling. The fact remains, the majority in most states, bipartisan majorities, do not believe abortion should be restricted in every case and therefore a total ban would be out of step with the public – even among Republicans. So is there daylight between Republican candidates?”

“I’m thinking about the NC 4 (congressional), it’s been described as the bluest congressional district in North Carolina. I think there’s real interest in seeing just how progressive those primary candidates are. I think there will be an expectation that the candidates will weigh in boldly, on women’s reproductive freedoms, women’s health and whether they’re willing to offer a full-throated, bold statement of support in that area. I actually do see this potentially becoming an important issue in that primary.”

ON GOP CANDIDATES IN US 13 HOUSE RACE

“We’re seeing Trump as a presence and I think, considering the influence Trump’s presence in previous elections for drawing out voters, in getting that turnout, I see there being a very intentional use of the Roe vs Wade on the right … to create some contrast between the candidates.”

ON ISSUES IMPORTANT TO YOUNG VOTERS

“Now, women’s reproductive freedom takes center stage. This could be that issue that could mobilize young voters, certainly for the primaries but potentially for that general election in November. Paying attention to the (U.S.) Senate race for the Democrats … there’s so many interesting parts of Cheri Beasley’s candidacy.  The fact that she would be only the third African American woman elected to the Senate in history. She as a candidate is seen as a dynamic candidate who can connect with people.”

“But her candidacy was also intended to generate interest from young people. Her candidacy, plus an issue like this, could potentially do that work to attract young people to the polls. That’s absolutely necessary, in my opinion, to give the Democrats a fighting chance in that Senate race. Right now the national trend leans towards Republicans in taking control of the Senate. In North Carolina, Republicans are projected to have a good year.”

ON YOUNG VOTERS AND PARTY POLITICS

“A lot of my students, they opt out of identifying with a party. For them, the parties just don’t do it. They see this polarization and the rancor, and in so many cases a lack of real advocacy on the issues they really care about.”

“I think for the parties to appeal to those unaffiliated or independent voters, young voters in particular, they’ll have to do a better job of speaking to the issues they care about the most.”

“My students are really focused on issues like climate, gun access, gun safety. There are so many things they see as priorities. They’re concerned about the filibuster and need for institutional reform. In many cases they see elected officials as beholden to special interests and their own political power and maintaining it, and not necessarily acting as boldly to create a long-term future that’s secure for them. I think they’re very disappointed in many ways, and disaffected.”