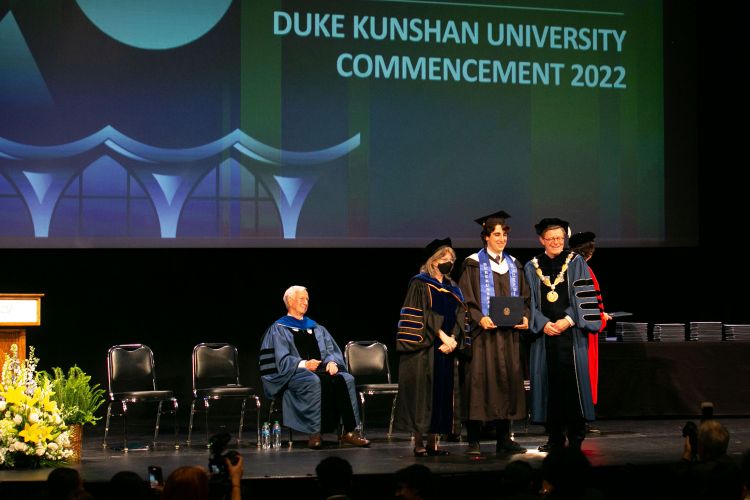 Duke Kunshan University celebrated its inaugural class of undergraduate degree students Thursday night in a series of ceremonies for students and faculty in Durham, Kunshan and beyond.

Fifty-eight DKU students received their diplomas at Page Auditorium Thursday night. Many of the 58 completed their studies in various locations around the world after the COVID-19 pandemic disrupted their return to China in 2020.

DKU hosted a companion celebration online, as the pandemic precluded a full-scale graduation event on the campus in China. The inaugural undergraduate class comprised 234 graduates from across the globe, all of whom received two degrees: a Chinese degree from DKU, and an American degree from Duke University. An additional 151 postgraduates were awarded master’s degrees.

“You rose to every challenge, you have made DKU known around the world through your achievements, and now you are ready to go stake out a bright future for yourselves,” said Duke University President Emeritus Richard H. Brodhead, who spoke to the graduates four years after welcoming them to the university he was instrumental in establishing.

DKU was founded in 2013 as a partnership between Duke University, Wuhan University and the city of Kunshan. Vincent Price, who succeeded Brodhead as president of Duke in 2017, also spoke at the Duke event and praised the graduates’ perseverance and commitment.

“This has not been the experience that you anticipated when you came to Duke Kunshan,” Price said, “and your adaptability and commitment to keeping each other and your communities safe is a significant achievement in itself.”

Huang Bihui, the student speaker at the Durham celebration, acknowledged the disruption wrought by COVID-19.

“As it continues to create borders and distances between us, we have still managed to nurture the relationships we built among ourselves,” Huang said. “This is what I think is our best achievement.”

Wanying He delivered a second student address recorded in China (See video below).

President of Westlake University Yigong Shi was among the speakers at the online Kunshan event.

“As the first cohort of DKU graduates, you will set the benchmark,” Shi said. “The fact that you chose DKU four years ago already illustrates your courage and vision.”

Some of the graduates are moving on to further study at Tsinghua, Peking, Duke, Harvard, Cambridge and elsewhere. Others are launching careers with Deloitte, Huawei, McKinsey & Co, Microsoft, PricewaterhouseCoopers, Tencent and others.

Brodhead, who is also honorary chancellor of DKU, said he trusted the graduates’ pioneering spirit would carry them forward to great things.

“Every part of the globe needs good people to help make a better world for all,” he said. “Go do your part.”