On a sunny and quiet morning this past Saturday in Washington, D.C., dozens of Duke alumni, family and friends gathered at the sacred grounds of Arlington National Cemetery to pay tribute to fallen soldiers and to lay a wreath at the Tomb of the Unknown Soldier.

The DukeDC event, “A Morning to Honor and Remember Our Veterans at Arlington National Cemetery,” was co-sponsored by Duke Divinity School and the Duke Military Alumni Network. The program featured remarks from Associate Dean of the Duke Divinity School Dan Struble and Army Chaplain Mel Baars O’Malley A.B.'05, M.Div.'08, in advance of Memorial Day.

Struble discussed the Divinity School's role in preparing military  and other chaplains, the Divinity School’s efforts to equip leaders who bridge the gaps in our polarized society, and the importance of the Duke Military Alumni Network – a community that provides connection for military-affiliated Duke alumni and their families with peers around the globe to offer support and resources.

O’Malley shared her journey from Duke to the U.S. Army chaplaincy. During her freshman year, she recounted a pivotal moment in her life and career: walking to the Marketplace for breakfast on Duke’s East Campus on September 11, 2001. Since that fateful day, O’Malley described her deep connections to the military and chaplaincy as arising from both a series of deliberate, yet serendipitous events.

In honoring veterans at Arlington, we are, “remembering those who have served, honoring the spirit that has propelled them to say yes to the call, even if it means sacrificing everything,” O’Malley said. In her speech, she also underscored themes of friendship and the honorable willingness of those in service to “lay one’s life down for a friend.” 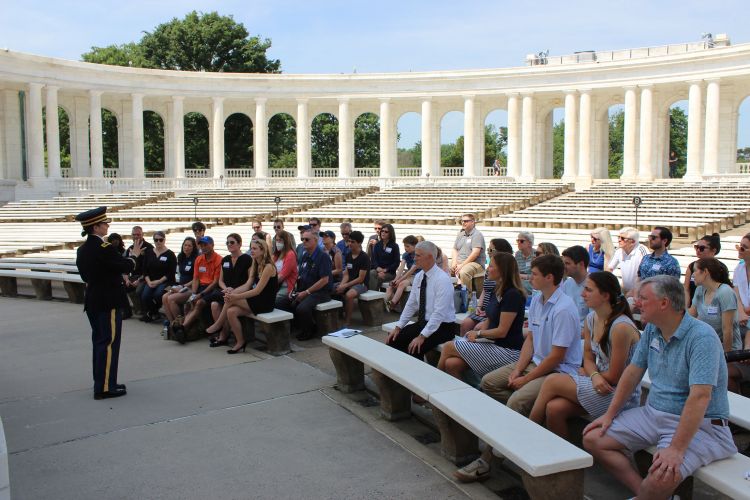