Professor Michael J. Sandel believes much of the world’s crises stem from a corrosive view of success -- and how it’s achieved. He calls this concept the “tyranny of merit.”

“The tyranny of merit, it's a paradox, because we usually think of merit as a good thing, something to aspire to,” Sandel said last week during a livestream conversation with Duke faculty and students. “If I need surgery I want a well-qualified surgeon to perform it. That's merit, in a way, so how can merit become a tyranny?”

Sandel, Anne T. and Robert M. Bass Professor of Government at Harvard University, then stepped back and offered an analysis of civic life.

“Those who’ve landed on top in these decades of globalization have come to believe that their success is their own doing, a measure of their merit, and that they therefore deserve the full measure of the bounty the market bestows upon them and, by implication that those who struggle those left behind must deserve their fate as well.” 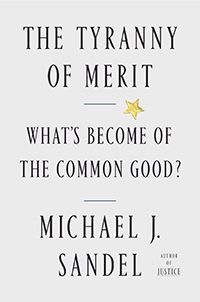 Sandel explores this subject in his book, “The Tyranny of Merit: What’s Become of the Common Good?” (2020).

Sandel told the livestream audience that higher education provides a good example of this “principle of meritocracy.”

“Not everyone has an equal chance to succeed,” Sandel said. “Young people born into poor families tend to stay poor as adults. Affluent parents figured out how to pass their privileges on to their kids. At highly selective universities like ours, despite general financial aid policies there are more students on our campuses from families in the top 1% than there are students from the bottom half of the income scale combined.”

He said at the top 100 most selective colleges and universities, about 70% come from wealthy families while only about 3% are from low-income families in the bottom quintile.

“It’s like an elevator in a building that most people enter on the top floor,” he said. “We failed to live up to the meritocratic principles we profess.”

He went on to say the principle is “corrosive of the common good, it leads to hubris among the winners and humiliation for those who lose out.”

Those less fortunate have good reason to resent elites, he added.

“If you want to compete and win in the global economy, go to college. What you earn will depend on what you learn; you can make it if you try. How many times over the past four decades did we hear politicians of both parties repeat this?" he asked.

“This spirit of humility is the civic virtue we need now. It's the beginning of a way back from the harsh ethic of success that pulls us apart. It points beyond the tyranny of merit, perhaps toward a less rancorous, more generous public life.”
-- Michael J. Sandel

“If you didn't go to college and if you're struggling in the new economy, your failure must be your fault. So it's no wonder that many working people resented this message and the economy that was defended and justified in its name.”

Sandel added that higher education shouldn’t be promoted as an engine to upward mobility. “Now, encouraging people to go college is a good thing,” he said. “Broadening access is even better.”

All panelists responded to Sandel’s talk with examples from their own research – and experiences of how a culture can take better care of those less fortunate.

Sanford School Dean Judith Kelley shared about how the government in her native Denmark has provided lifelong care for her brother with special needs, who’s now 60 with Parkinson’s disease.

“He has the best care you can imagine,” she said. “He has been taken care of all this time, and I think that if you went out and ask anybody, ‘How do you feel about your tax dollars going towards that?’ you would find everyone saying that is right, that is the right thing to do.”

To help change the harsh culture he described, Sandel suggests rethinking the attitudes toward success and failure that have accompanied globalization and rising inequality. One way is to foster a more informed view of the role of luck in human affairs, with more humility and more affirming of the dignity of work.

The pandemic exposed who in society were essential workers – grocery store clerks, delivery drivers and, of course, health care workers. They should be paid based on the value of what they contribute, regardless of education level, he said.

“This spirit of humility is the civic virtue we need now,” he said. “It's the beginning of a way back from the harsh ethic of success that pulls us apart. It points beyond the tyranny of merit, perhaps toward a less rancorous, more generous public life.”

The event was organized by the Duke Center for International and Global Studies and co-sponsored by the Sanford School of Public Policy, Religions and Public Life @ the Kenan Institute for Ethics, and POLIS: Center for Politics at Duke University.