Photographer Alex Harris’ new book, Our Strange New Land: Narrative Movie Sets in the American South, opens with a dream-like image of a young girl staring directly at the viewer from a darkened doorway, her arms reaching out to part a curtain of swinging beads. The photograph was made on the set of Roni Nicole Henderson-Day’s “And the People Could Fly,” a film, writes Henderson-Day in the essay she contributed to Harris’ book, “about the gravitas of life.” 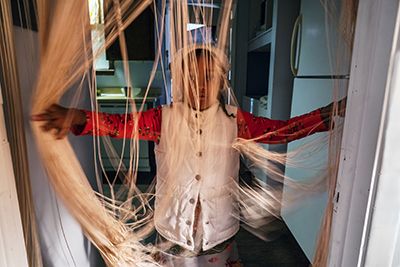 “The scene was and remains, like certain scenes from movies I’ve watched over the years, as real in my imagination as my own true memories,” Harris writes in the book’s afterword.

Our Strange New Land, co-edited with Margaret Sartor and published by Yoffy Press, uses Harris’ still photographs to explore memory and personal narratives set in the American South.  Historically, film has had an important role in shaping our understanding of the South, but in Harris’ book, we see how a new generation of filmmakers is creating works that challenge our prior assumptions and tell unexpected narratives of a South rarely seen.

The photographs, made in a pre-Covid era, between 2017-2019, were commissioned by The High Museum of Art in Atlanta and were recently exhibited as part of the museum’s Picturing the South series. Below, Harris talks about the project, the South and his interest in film.

DUKE TODAY: Let’s start with the title: "Our Strange New Land." You saw the book, a children’s history text, on a film set and took a photo of it. What's the story behind it?

ALEX HARRIS: When Margaret Sartor and I conceptualized and edited Our Strange New Land, we placed each picture in a sequence in the way a filmmaker might sequence shots in a film, so that the impact of a photograph of a book in a classroom is influenced by what we think we know from the pictures that come before it and affects the way we experience the photographs that come after.

This is a photograph of a book in a sixth grade classroom, but placed where it is in our book, it can transcend its moment and help the viewer ask questions about our evolving relationship with the history of the South and the history of our country. Whose Land? Why Strange? Strange to whom?

When I photographed that children’s history book, I was in Charleston in a sixth grade classroom commandeered as a movie set. At the time in 2018, not just the South but our whole country was in the midst of reexamining our history – a process that is ongoing – and the book cover struck me as an especially myopic view of history to be taught in school at that moment. 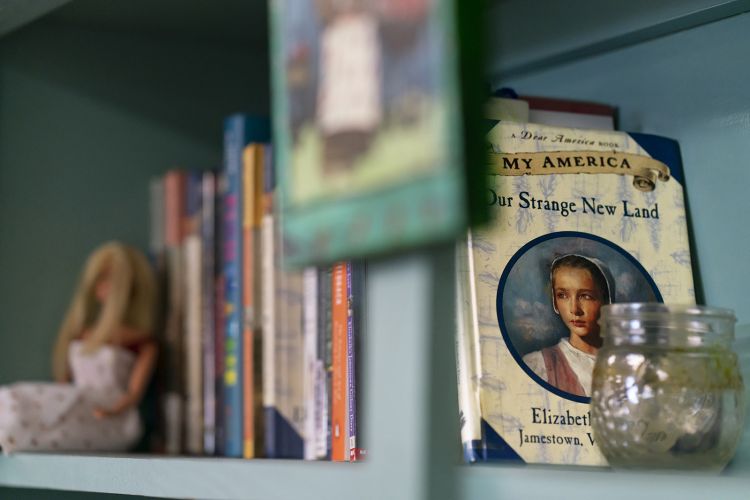 That classroom looked and felt like so many of the elementary school classrooms in Georgia I’d inhabited decades earlier. The southern history I learned growing up, and even the history our children were taught in high school in Durham, often glossed over, misrepresented, or ignored the history and perspectives of marginalized southerners.

For instance, our children never learned in school about the Wilmington massacre of 1898 or the subsequent successful white supremacist coup d’etat in our own state. The generation of filmmakers I was spending time were telling stories from those previously marginalized perspectives. In fact, one of the narrative films I photographed told the story of that same 1898 Wilmington massacre, with a black female director and from the perspective of a couple killed in that massacre.

It matters who tells the story. 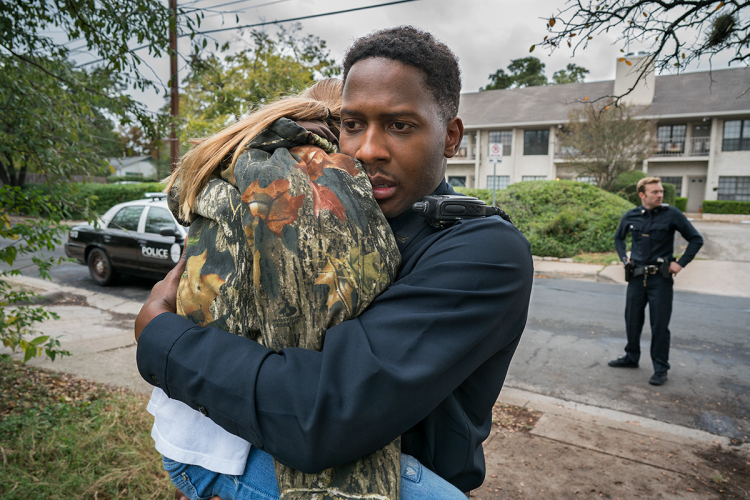 DT: Film has played an important role in building an historical narrative for the South. How did that film history shape your project?

HARRIS: This is a project about the imagination, not so much my own, but imaginations of the current generation of independent narrative filmmakers working in the South. As a photographer I wanted to respond to what was happening in front of and around the cinematographer’s lens, to discover what they were seeing and creating.  Working with directors and cinematographers from a wide range of social and cultural backgrounds telling stories from their own perspectives, I found myself looking at the South through a much more diverse and democratic lens than filmgoers have seen in the past. Almost by default my photographs in Our Strange New Land are a reaction against the pictures I and so many of us carry in our minds about the South and its history – images formed over the years from so many clichés and stereotypes, not just from films, but also from television programs, books, and popular culture.

I didn’t set out to say something about the South with my camera and hadn’t known in advance what I would find or discover on these narrative movie sets. I wanted to photograph on as many narrative movie sets as I could and to discover the story my photographs had to tell. In this book Margaret Sartor and I have created our own narrative, a kind of mosaic of images about life in the South that is unlike anything we had seen before in a photography book, beyond anything we could have imagined. I’m happy to say that you won’t find one white-columned mansion, confederate flag, or chain gang member in our book. 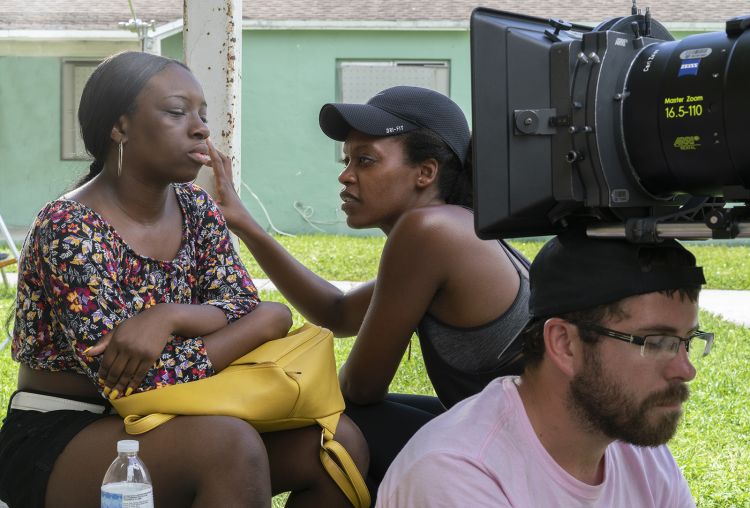 DT: I get the sense you felt something special on a film set. Can you describe the sensation you were having and how that came through in the photos?

HARRIS: For most of my working life as a documentary photographer I’ve been a loner by choice and by necessity. So there has been something so deeply satisfying for me about the experience of showing up on a narrative movie set for the first time, something like walking into a small town or a village where people know one another and everyone is working together, a village where there are longstanding relationships, a hierarchy of status already established.

There was something so satisfying about arriving at those movie set villages, and being invited inside, in immersing myself in each one and becoming part of that community – if only for a few days. Perhaps because of that comraderie or the way humor was used to get through hard work, there is a joyful quality coming through in so many of the photographs I made behind the scenes on set. 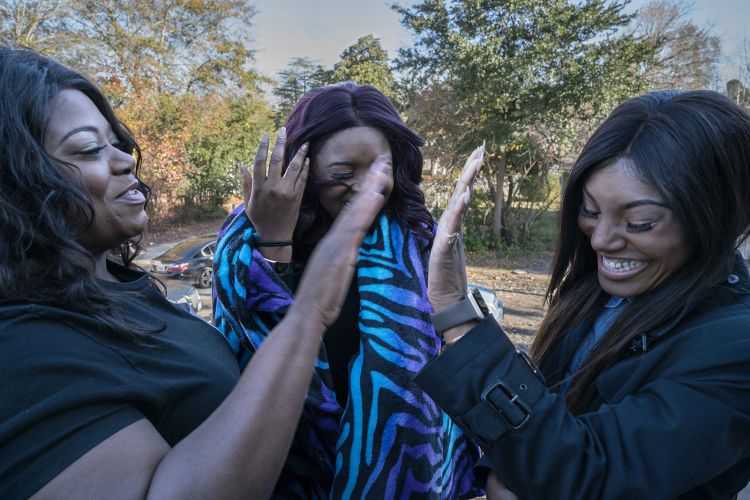 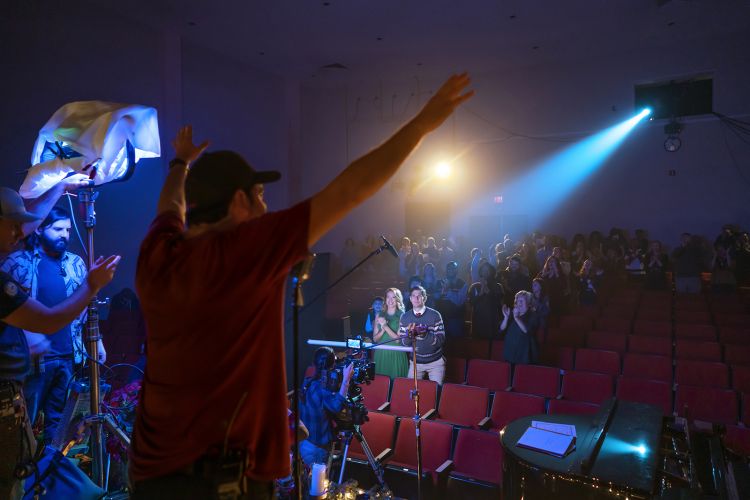 DT: Did you draw any particular lessons in how a director and cinematographers and others in these movies work with actors to create an image and story and how that differs from how you work as a documentary photographer when you work with people?

HARRIS: Flannery O’Connor said the role of a college writing teacher should essentially be negative. They can’t put the gift in a student, but if they find it there, they can try to keep it from going in an obviously wrong direction. Directors in these independent, narrative films were working with actors they believed were gifted or had real potential to come alive in front of the camera. Mostly I observed directors following O’Connor’s dictum.

As a still photographer, I am trying to anticipate an emotionally or visually compelling moment. I don’t give directions.

On set, I found myself drawn especially to the gaffers and lighting technicians. I used to follow them around. We spoke the same language. Like me they were looking for light. Unlike me, they were experts at creating and manipulating light. I loved the way they could direct a particular colored light to one area of the scene or incorporate fog or haze with light to invent an atmosphere. Some of my photographs on set, like the cover or our book, are simply about the light they created.

Since photographing on movie sets, I’ve found myself, particularly with my family, experimenting with some of their lighting techniques. In fact, I am now the proud owner of a fog machine! 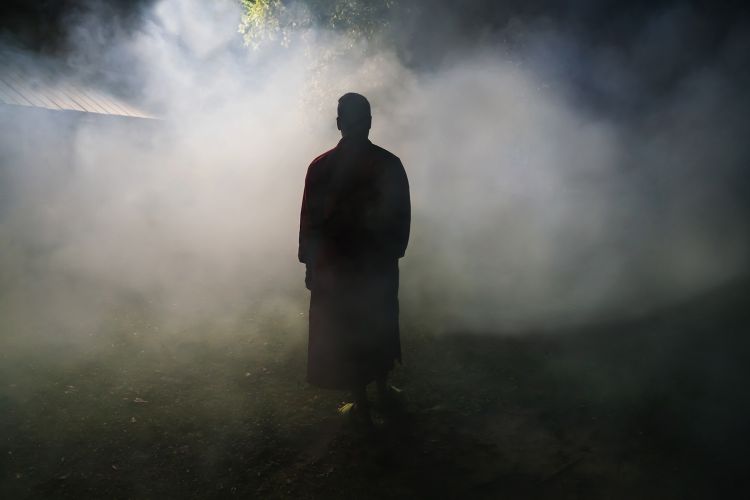