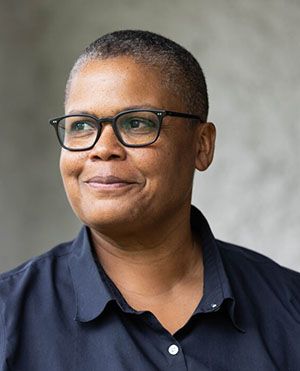 Princeton University historian and writer Keeanga-Yamahtta Taylor, speaking during Duke University’s Martin Luther King Jr. commemoration held virtually on Sunday, touched on her scholarship on how past and present political and economic policies sustain chronic racial inequality, and how social movements, such as Black Lives Matter, can transform that narrative.

The professor of African American Studies and 2021 MacArthur Fellow shared Dr. King’s words illustrating his growing critique of military spending and unfettered capitalism, culminating in his call for a general strike in Memphis and a larger social reckoning in the United States.

“His goal changed to building a multi-racial movement,” said Taylor, who cited a story published one week before his assassination, in which he told a reporter for The New York Times Magazine that “in a sense you could say we are engaged in a class struggle.” He would go on to assert that the movement to uproot poverty and inequality would require a redistribution of economic power, a “radical reconstruction of American society.”

Taylor also cautioned about “the dulling of King’s legacy,” using his words activists the activists who carried his campaigns after him.

“The deadening repetition of “I Have a Dream” was used as a weapon by the right to present their political agenda as colorblind, as they dismissed Black suffering as lapsed personal responsibility, cultural deficiency, or the warped values of Black families. The problem with how we remember King is not just the inaccuracy or the distortion of his politics, but it is also how those distortions are used to pursue or justify regressive policies that King never would have supported and most certainly would have organized protests against.”

Taylor’s most recent book, “Race for Profit: How Banks and the Real Estate Industry Undermined Black Home Ownership,” was a finalist for the 2020 Pulitzer Prize.

Duke Chapel hosted the annual ceremony, which can be viewed on YouTube.

The commemoration was the highlight of the university’s MLK week. A campus Unity Walk that had been scheduled for noon on Monday, Jan. 17, was also held virtually because of the winter storm. Guest speakers included Duke President Vincent Price, Duke University Head Softball Coach Marissa Young and Duke student-athletes.

The students brought a message of how much Dr. King continued to inspire them, five decades after his death, with Elasia Campbell calling him “one of our greatest coaches and mentors.”  But Campbell and other students also said any celebration of his life came with the responsibility of acting to fulfill his dreams.

“MLK Day should be more about showing off a diverse group of friends,” said Campbell, a junior who is a member of the Duke Track and Field team. “I would like to see more thank yous to Dr. King for his belief that nobody should stand by idle in the face off injustice. … We can’t show up on MLK Day but then struggle to defend justice on every other day of the year.”

Price, in his remarks, said Duke would continue its internal efforts to examine its own racial history and practices.

“The promises of equality and opportunity that define our nation will elude us unless we confront and overcome the inequities on our campus and beyond. That is why anti-racism and equity—alongside our core institutional values of respect, trust, inclusion, discovery and excellence—will be vital priorities for Duke not just in this moment of change, but for many years to come.

“In order for us to succeed in fostering a more inclusive culture, we know that our efforts must be serious and sustained institution-wide. And importantly, these actions have been undertaken with an eye toward promoting equity at each level of the university.”