Britt Keith hustled around the kitchen and out into the yard for fresh clippings like an anxious mother hurriedly packing her kids off to school. She gently stuffed a handful of sumac, sweetgum, and tulip poplar leaves into brown paper lunch sacks labeled “Izzy” and “Slausy,” then tore the bags open a bit because Sifakas aren’t big on problem- solving. Carrots, sweet potatoes, in-the-shell nuts and a few other special treats were poured into Ziplock bags.

Keith, a Duke Lemur Center colony curator, had cared for the pair of Coquerel’s sifakas since they were born one day apart in 2015. She knew, as she packed up the food, water, and care instructions, that she might never see Isabella or Wenceslaus again.

Isabella, the dominant partner, quickly climbed inside her custom-fitted crate to investigate the lunch bag. Wenceslaus took a minute longer, but this was nowhere near the stress of the worst-case scenario of being chased around and netted.

The kennels were gently closed and latched, and a few minutes later, around 8 a.m., the precious cargo and a water-filled pitcher with more fresh sumac were snugly tucked into the back of a Duke-owned Subaru for the drive to the airport in Atlanta.

Aside from alerting Duke leadership to the potential for a disaster, Duke Lemur Center officials have been quiet about their efforts to relocate four pairs of breeding sifakas to zoos in Germany and the United Kingdom. Sifakas are as delicate as they are beautiful, and there was a good chance they would die in transit or shortly after their arrival.

Izzy and Slausy were about to begin a thirty-six-hour journey that would mark the beginning of a new chapter in lemur conservation or cost them their lives. 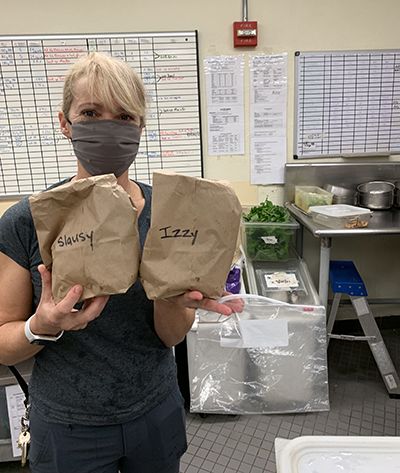 Transferring the breeding pairs had been more than four years in the making. The loss of habitat continues to push lemurs to the brink in their native Madagascar, making the U.S. population of Coquerel’s sifakas— half of which resides at Duke—a lifeboat of sorts. The thought began to dawn that there should be other outposts of breeding sifakas. “We can’t have all the animals in North America. It’s just not responsible,” Keith says.

To decide which pairs could travel, the official stud book kept at the Lincoln Park Zoo in Chicago was consulted. “We didn’t want to give away all our good genes,” Keith says, as the walkie-talkie on her desk quietly chatters and squawks. But they also didn’t want to doom this isolated new population with inbreeding. “At this point, everyone’s a little bit related.”

Athletic and long-limbed, and always willing to look a human visitor squarely in the eyes, the russet and cream-colored sifakas are “fragile and needy. They require a lot of staff time and vet time,” says Andrea Katz, the semi-retired former curator who helped shepherd the breeding program for many years and began the discussions of some kind of transfer more than a decade ago.

“Sifakas are super-delicate,” echoes Keith. For starters, they need to eat fresh leaves every day or they die. Their extraordinarily long intestines are prone to deadly kinks, obstructions, and clostridium infections. And while Duke and other centers have succeeded in breeding them in captivity, their infant mortality is around 50 percent. Many captive sifakas now live into their twenties, but their average life expectancy works out to just seven years.

Isabella, lemur number 7201f, is the daughter of Charlemagne, which makes her the granddaughter of the TV star Jovian, who played the live-action Zoboomafoo in the children’s program of the same name. Her mate, 7200m, Wenceslaus the Idle, Coleslaw or Slausy, is the son of another prolific Duke mother, Rodelinda. These are second-generation captive-bred sifakas, among the few to survive to adulthood and fertility. There are no wild-caught Sifakas left in captivity.

Duke invited applications in 2017, and four European zoos responded. Four pairings were decided from a potential population of just sixty-six animals. Those born elsewhere, Euphemia and Sigismund from Baltimore, Justa from St. Louis, and Elliot from Los Angeles, were brought to Duke in 2017 and 2018 and paired with Duke mates years ago to ensure compatibility. Keith pauses. “Everything has to be…perfect.”

Each receiving zoo sent a person to be trained at Duke in sifaka care, and Keith visited Europe to see what the new accommodations would be like. Duke also provided an authoritative sifaka-care handbook, written and refined by Katz and Lemur Center veterinarians, who know more about lemur care than anyone in the world.

In June, the transfers began. The first sifaka pair, Beatrice and Elliot, were already on their way to Atlanta when the last bureaucratic hurdle popped up. Lemur Center Executive Director Greg Dye was informed of a missing United States Department of Agriculture form a good three hours after the Subaru had merged on to I-85 south. He had to decide whether to call the mission back, but he chose not to while Duke staff in Durham and Washington worked frantically to get the paperwork unstuck in time for the flight to London.

“Five years from now, if there’s one baby, maybe two, that would be amazing.”
-- Amanda Greene

The manifest said two live animal packages, fifty-five kilos. No care technicians, no vets. The lemurs travelled as freight in ordinary $300 kennels like an eighty-pound dog would need, refit by Lemur Center staff to include little pieces of home: a raised floor for two days of bodily functions, some shavings, a water bottle, a sturdy branch to hang onto or crampedly sit on, and the paper lunch bag full of fresh leaves. And on top of it all, a truly giant zip-close bag full of many other zip-close bags of fresh snacks, a just-in-case-of-escape net, and a bright yellow folder with instructions and phone numbers for anyone who might have to deal with an issue along the way.

The box was roomy, but not exactly a forested enclosure. The kennels were fitted with green filter fabric over the windows for privacy, but the front flap was a curtain that could be raised for inspections. Customs officials always ask the techs to take the powerful nine-pound sifakas out of their boxes, but they’re wild animals that aren’t normally handled, and they can leap more than twenty feet from a standing start. “We’ve learned to say they bite and scratch,” Keith says. “That seems to work.”

Beatrice and Elliot spent thirty-six hours in their customized crates on that first trip—from Durham to Atlanta to London and then a ninety-minute van ride to the Chester Zoo in Upton-by-Chester, U.K. Much of that time, they were simply sitting in a room waiting for the humans to agree on the paperwork. Heathrow customs held them for ten hours before a government veterinarian could be persuaded to let the lemurs go. 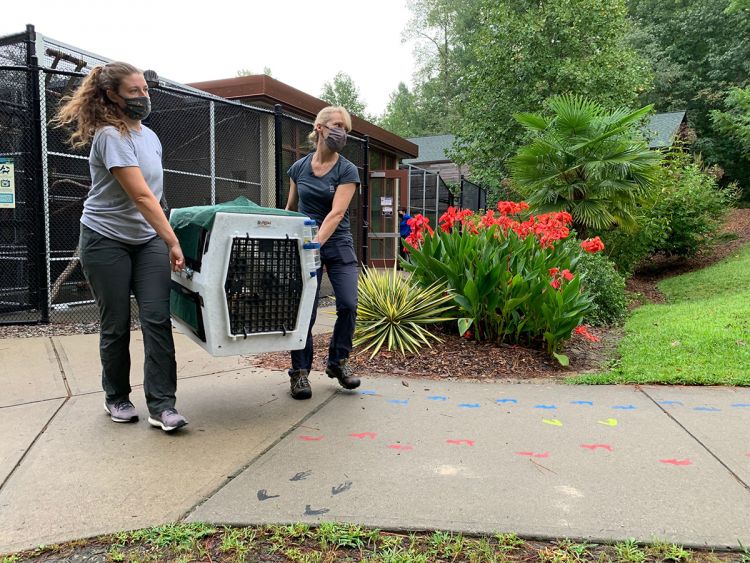 For each delivery, the road crew bivouacked in a hotel near Atlanta awaiting any word and wheels up for at least ten hours. Registrar and data manager Amanda Greene used a flight-tracking app on her phone to be sure the plane was really in the air, still in the air, and finally down in London. “It was only a six-hour flight, but it seems like it took a week,” she says. “A week and a half later, we did it all again. The anxiety level only decreased a little bit.”

The second shipment was Sigismund and Justa for Cologne and Euphemia and Hostilian (another grandchild of Zoboomafoo) to Berlin on the same Lufthansa plane. It seemed to be going more smoothly until a freight handler in Atlanta found a box of pet gerbils on a different level of their plane. German authorities require that only one kind of animal be on a flight. A few phone calls later, the rodents were bumped and given coupons for a later flight.

The Lemur Center has done everything it can to make the transition from Durham to the new homes safe and smooth, but there will be important differences. For example, the sifakas’ absolute favorite leaf is sumac, which is abundant in the summers when they browse all sorts of plants in their natural-habitat enclosures at the Lemur Center. Duke struggles to keep a good supply of sumac for them year round, packing seven giant chest freezers with fresh cuttings in the fall. But European zoos have an entirely different collection of plants. “We’re gonna know a lot more about browse and babies after this first winter,” Katz says. “I’ll be very interested to see what we can learn from the European zoos.”

Lemur Center staff expected the worst of the transfers, but the lemurs all seem to have survived the trip. Tierpark, in the former East Berlin, is holding an extra pair from Duke—Isabella and Wenceslaus—because a zoo in England lost its financial footing in the pandemic and decided it had better not commit. For now, all four pairs are safely settling into their new homes and the birth control is off.

Still, expectations are tempered by hard experience and tragic losses over the years. “If they’re all still alive a year from now, that would be success,” Katz says.

“Five years from now, if there’s one baby, maybe two, that would be amazing,” Greene says.

Isabella and Wenceslaus left months later than the others, and a second move for them would probably have to wait another breeding season at least. Sifakas are only fertile once a year, during the Northern Hemisphere’s summer. Babies are born in January and February. The pair might eventually end up in Dublin, if it can be arranged.

The name sifaka is a Malagasy onomatopoeia for the gentle humming grunt the animals use to communicate. As their journey began, Isabella uttered the noise quietly as the two kennels sat next to each other in the back of the Subaru. “It can be a contact call, like looking for him,” Keith said. “That’s a normal sound we hear when they’re with their family.”

“They’re gonna be great. They’re gonna make babies!” Greene reassured her colleagues before getting behind the wheel.

For another pair, her words may ring true. In July, not long after their arrival at Tierpark, Euphemia and Hostilian were seen breeding.