Things went badly for German art dealer Hans Wendland in 1931. For one thing, there was a Depression on, and for another Wendland was getting a divorce. Wendland wasn’t a terrific guy—he lost an early museum job when he was accused of personally profiting off material he acquired while working for the museum, and he appears to have profiteered during the Russian Revolution by purchasing art from fleeing aristocracy. And his divorce may have been the result of his meeting the much-younger woman with whom, a few years later, he moved to Paris.

Anyhow, in 1931, it was time for Wendland to sell his art collection. And in that collection was a self-portrait by Joseph Siffred Duplessis, the French artist who in 1778 painted probably the most iconic image of Benjamin Franklin.

Except this self-portrait, maybe, not.

Duplessis certainly painted Franklin, but the self-portrait sold from Wendland’s collection in 1931 turns out to have been not by Duplessis but—probably—by a British painter of the same time period. It made its way, one way or another, through several collections and galleries, and ended up in the Pinecrest residence in Durham of Mary Duke Biddle Trent Semans ’39, who in 2013 bequeathed it to the Nasher Museum of Art.

According to associate curator Molly Boarati, “soon after we acquired it” a local expert the Nasher knows said, “this is not a French painter. This is English.” The subject is still unknown, but the painting appears to be by Joseph Wright of Derby, whose self-portrait, on loan from Yale, hangs in the Nasher now along with the painting now attributed to Wright, in an exhibition called “Off the Map: The Provenance of a Painting,” through Jan. 9. 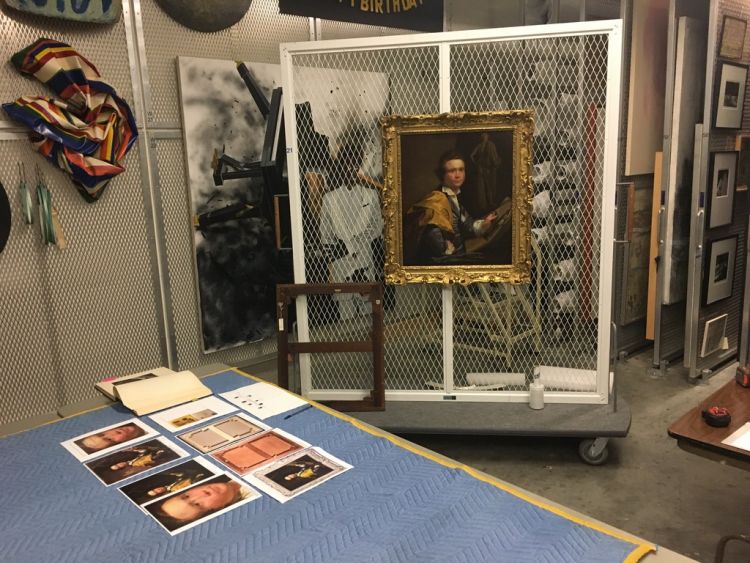 Boarati explained the story of the painting’s provenance—you’ve barely heard the start of it—after going down in an enormous freight elevator to the Nasher’s basement, where she had out not just the Wright painting but also its original stretcher—the interior frame that holds the canvas—and photocopies of articles from newspapers, the covers of art magazines, and books and auction catalogues, like the one from 1931.

The provenance of a painting is just what it sounds like: its background, its origin story. Who owned it? When? How do we know? Who painted it, and are we sure? Who bought it first, and what happened to it every step of the way from the moment the artist—in this case Joseph Wright, we’re pretty sure—stepped back and decided it had all the happy little trees it needed.

Nothing isn’t part of the story. “This frame,” Boarati says of the florid gilt frame in which it now hangs. “It’s kind of unsure how long it’s been with the painting.” A frame expert was able to identify it as a Louis XV-era frame that fits just right. Beyond that, though, “We have this mystery sitter in a painting with a lot of questions.” And Boarati set about answering them.

Part of the job of determining provenance is the issue of morality. Objects that may have changed hands during the Nazi pillage of Europe, for example, should be returned to their original owners, to the degree that’s possible; the Nazi-Era Provenance Internet Portal makes that possible, so the Nasher added several hundred of its objects that might fit. The Wright painting doesn’t seem to have changed hands during that era (though Wendland, as it happens, seems to have got involved in that enterprise).

Less grisly aspects of provenance research involve decoding any numbers, stickers, stamps, or words written on the stretcher or frame, and anything done is documented and retained. For example, the little plaque that once identified the Wright painting as being by Duplessis no longer hangs on the front, but it does hang on the back. It’s part of the story.

Boarati showed off newspaper stories that describe the painting hanging in various exhibits, and other catalogues in which it appeared. Visitors to the exhibit are encouraged to put on their own detective hats and see if they can fill in any of the holes in the story of “Portrait of an Artist,” attributed to Joseph Wright of Derby.

“Part of the reason to have an exhibit,” Boarati said, “is to make it even more public. To show them what goes on behind the scenes.