Join Duke's Forum for Scholars and Publics and Duke University Libraries at noon on Wednesday, January 19, for an exploration of the role of art in creating knowledge and narratives about slavery, the Civil War, and freedom struggles in the United States. Historian William Sturkey will guide this conversation with professor and artist Stephen L. Hayes.

This event is part of a series accompanying the exhibition, "'To stand by the side of Freedom': Abraham Lincoln and 19th century America," on view at the Rubenstein Library through May 14, 2022.

Free and open to the public. Advance registration required. This event has been updated to be offered as virtual only. Go to event page for registration link.

Read more about Hayes' project below:

A new sculpture years in the making by Duke professor Stephen Hayes honoring Black soldiers in the Civil War will be unveiled at the Cameron Art Museum in Wilmington, NC, this Saturday, Nov. 13.

The museum was the site of the Battle of Forks Road, a Civil War skirmish whose victory was won by the United States Colored Troops and led to the fall of Wilmington. Hayes, assistant professor of the practice of art, art history & visual studies at Duke, created "Boundless," a life-size bronze sculpture, from the cast features of eleven African American men connected to the site and its story. 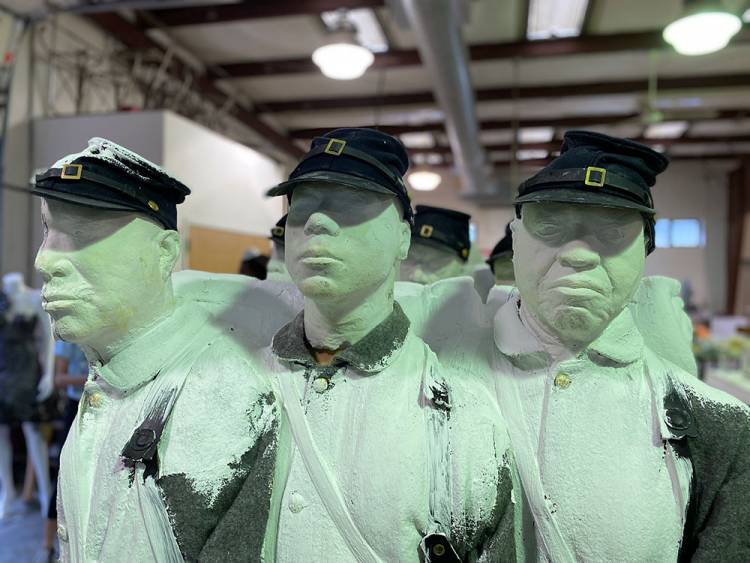 “As a Black man in America, you see the imagery of a Black person in chains, being whipped, begging, kneeling and helpless. This project is important to me because, as a creator, I get to change that narrative — by giving Black soldiers a sense of honor and pride,” Hayes said in The Washington Post.

“If it brings a sense of healing, I welcome that,” Hayes said. “At the end of the day, my art is here to create a conversation and allow people to speak out together.

“These men were here to fight for their freedom, but then also, where does it go today or in the future?” Hayes told me. “I was thinking: What if I cast a bust of the descendants of the soldiers and have them be a part of it because it still creates that story of now and progress and seeing how far we’ve come? It’s telling a story, and I’m also creating a place for relatives and family members to want to come to.”

Hayes's work is also currently on view at the North Carolina Museum of Art and he co-curated Visual Vanguard: An Exhibition of Contemporary Black Carolina Artists at the Harvey B. Gantt Center for African-American Arts + Culture.

Stories about Stephen Hayes and “Boundless”